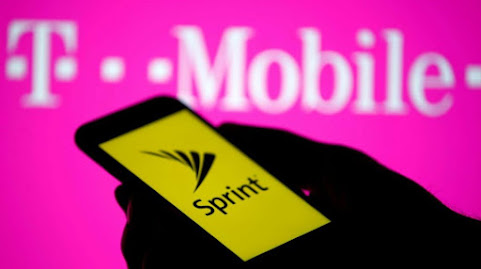 We talked about this late last night and now it looks like early morning traders are the only people to make this news work for them . . . Meanwhile, JoCo jobs are closer to MASSIVE LAYOFFS that are an inevitability amid this move that's more of a takeover and acquisition . . . Not a classic collabo:

"The stock was up 70% in premarket trading. It had risen after hours Monday after The Wall Street Journal reported the judge was expected to rule in favor of the deal. Shares of T-Mobile were up more than 9% before markets opened.

"The ruling clears one of the final hurdles for the deal, which still can’t close until the California Public Utilities Commission approves the transaction."

Buh-bye Sprint, wish we could say it's been nice.
This was the unstoppable course set when the Chinese bought Sprint and brought Claure in to package it for peddling off!

Tough beans, Overland Park, sure you won't have ANY trouble filling up the space you built for Sprint.

^^ 9:45 -- SoftBank owns nearly 80% of Sprint. It's a Japanese company, not Chinese. The Chinese own AMC. Perhaps that's what's confusing you because of its proximity to the Sprint campus. The truth is AT&T and Verizon have been charging high prices for their wireless services for years. They need the funds to pay for all those pensioners and lobbyists, who I'm sure tried to stop the combination of T-Mobile and Sprint so they didn't have to face a much stronger competitor.

^^^ Yes but SON IS CHINESE! And SoftBank has been playing "Switzerland" for China and Chinese Government Officials for decades!

Masayoshi Son is founder and CEO of Softbank. Son was born in Japan but is of Korean descent.

If you are in Sales and Marketing at Sprint YOU may be alright. Nothing happens until a sale is made. And they need much revenue coming in. A great Cash Flow.