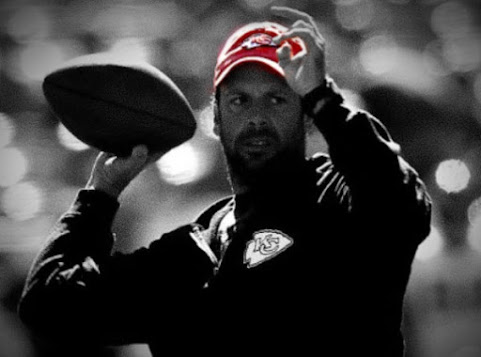 Right now we share just a bit of inspiration to help "has-been" and "never-was" readers cope with their quiet lives of desperation and feel better about Kansas City mediocrity dutifully enforced by local meanines and the mainstream media.

Real talk . . . The first line is too cynical and we refer our readers to a German philosopher who once said "Sei Sein Eigener Held" which roughly translates to "be your own hero."

Let's not forget that HOBO HALEY was a wunderkind of sorts and one of the youngest head coaches in the NFL at the time. Moreover, many of the same people who celebrated the Chiefs Super Bowl victory thought that Haley would also begin a local dynasty.

Given that FOOTBALL IS NOW ABOUT AS FAKE AS PRO-WRESTLING, it might not really matter. In fact, more skeptical souls should be emboldened by a simple fact of life: NOBODY STAYS ON TOP FOREVER.

Again, we reference this not to be a creep but maybe so that QB Patrick Mahomes will stop wasting his cash on sneakers given that every penny counts.

Lulz. I can only agree that spending a fortune on 180 pairs of luxury shoes is silly for a man or woman. The QB is great bus shouldn't be celebrated for that.

^^^ you said something that was kind of funny.
Neato.

^^Stop talking about hate, you hater.

This is troll bait and I think it worked.

Noticed a few comments above me cleared. Now that we're here let's think critically about this. Haley was actually very innovative and the personnel changes he brought to the Chiefs are still in place. I think his biggest problem was his temper. But if he's coaching high school that probably means he has learned a lot about being humble. I would expect to see him return to the NFL very soon. He was a great coach and deserves another shot. Way too early to call it a career for him just yet. Look at Reid. He just won his first Super Bowl and looks like he might get another sooner than you think.

Wildman's up late. Nobody loves the wildman. Sad. Because he is actually a great writer. Too bad there is no other publication in town that wants to deal with him. He ain't so bad. Just spoiled.

Greedo, please go jump in a hole and stay there. Han shot first you dumb-ass.

You dolts have been fooled. This is OBVIOUSLY a publicity stunt done to gain media attention. What's the problem? A famous and successful coach lends a high school some of his notoriety and earns a bunch of headlines for helping them out. Overall this story is a win, too bad this dumb blog and even dumber readers too full of hate to notice.

out of the loop all of u beetches. Haley should replace bienemy when he leaves. Todd was was one of the most fun coaches the chiefs have every had.

Haley was a real good fookin coach, but sub IQ ghetto wannabes found it to easy to bag on his lack of "playing the game" to cover their own lack of ability and commitment. "Those who can't--teach" is a quote often used to deride teachers and coaches, but what it really means is that all those who "can" are so busy in the moment "doing", that they can never step back and learn from all that is going on. Thus, the field of analytics. The Cards, the Chiefs, The Steelers-- all their thugees had their best seasons under Haley- but the thugee ego can never admit that a "golf coach" was smarter than they are.

Anyone want to mention the end result of the Player's money ? You know , the stereotypical blonde whore wives that marry only for their bucks, have a few sex trophies for court division of wealth , spend money on stupid ass irish rich shit and then fly the coop when the career goes South. GO NFL wives ! You go Blonde. You can bleach your hair, but you can't buy class.

Greedo, please go put a gun barrel in your mouth and pull the trigger.

He was an OKAY coach. More than qualified to coach high school ball.

Matt Moore was coaching high school football in Florida before he became the Chiefs' backup QB. Now he has a super bowl ring. Comebacks happen.