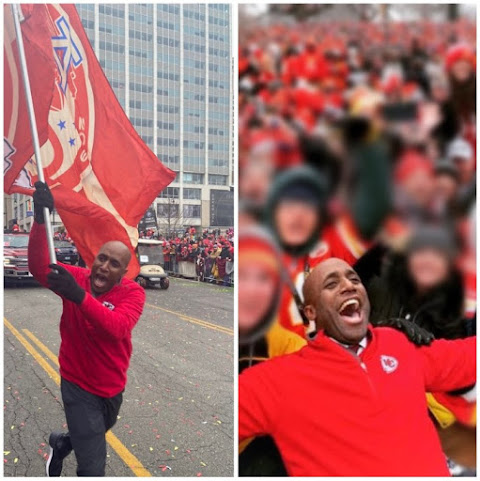 Mayor Quinton Lucas has enjoyed a boost from Super Bowl glory and overall his likeable, thoughtful and friendly manner have spared him from typically harsh criticism over a lack of progress on issues like crime, infrastructure and corporate welfare taxpayer subsidy which still plague Kansas City.

AS MAYOR LUCAS APPROACHES HIS FIRST STATE OF THE CITY ADDRESS, SOME VOTERS ARE INCREASINGLY CRITICAL OF HIS ADMINISTRATION THAT'S MORE PERSONALITY THAN POLICY CHANGE!!!

A note about the big speech that's already playing below the radar:

Mayor Lucas will deliver his inaugural State of the City address next Wednesday, February 12 at Center High School. During his address, Mayor Lucas will highlight the policy successes of his first six months in office and will preview his budgetary priorities for the Fiscal Year beginning May 1. The proposed City budget will be delivered to the City Council on Thursday, February 13.

Now, a word from a TKC reader sent our way from a Southeast Kansas City power player . . .

"Do you follow any of his socials? The pandering to constituents is insipid and follows the same pattern as former Mayor Sly James. Sure, Quinton Lucas is younger and much more photogenic but it's the same script. There are a lot of affable statements and great photos on his Instagram; but what has he accomplished so far? We still haven't seen his vision for Kansas City. It's starting to look like business as usual to a lot of people."

Of course we thought it was fun that the Mayor announced paying off his student loans . . . 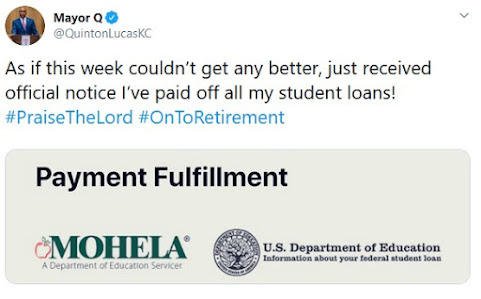 However, here are more serious examples sent our way to back up the the criticism and offer more info for both supporters and detractors alike: 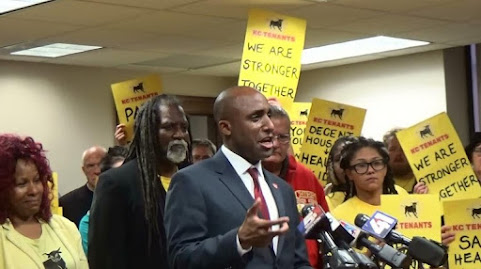 - The KC Tenants resolution and "bill of rights" is the Mayor's biggest policy achievement so far. Funding for enforcement remains in flux and many landlords also claimed victory during this debate -- So-called "home providers" argue the legislation was mostly gutted and won't change much.

- Mayor Lucas recently announced plans to pardon 8,000 misdemeanor marijuana offenders and that has earned high praise from stoners and social justice advocates. However, law enforcement and neighborhood volunteers aren't so enthusiastic about the pro-weed agenda at City Hall. 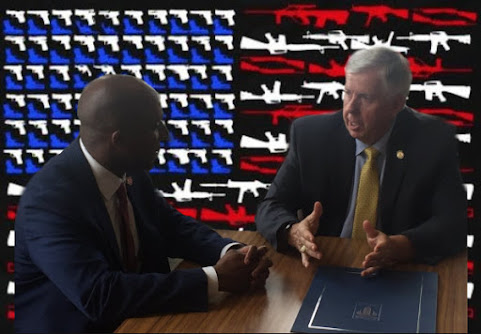 - In one of the biggest disappointments of his new administration, the Mayor was absent from a sales tax increase vote that threatens to spike the cost of living even higher for low-income residents. 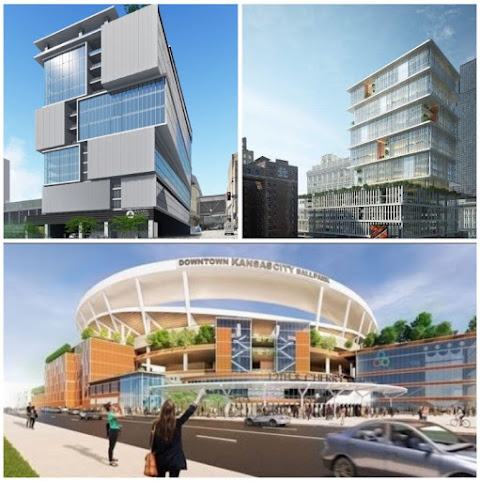 - Despite talk of reform, the Mayor Lucas was unable to persuade his colleagues against endorsing HUNDREDS OF MILLIONS worth of subsidy for the Strata downtown office building and Waddell & Reed's new corporate HQ. And now the question of a downtown stadium reveals the Mayor isn't so averse to the idea as he initially hinted after his election.

- Finally and most importantly, the homicide count and trending Kansas City violent crime remain at a 10-year record pace. We've enjoyed a few relatively peaceful days recently but this has been an unseasonably bloody winter. Already a mass shooting has made national headlines along with an out of control repeat offender meth suspect nearly crashing the Super Bowl parade.

DESPITE FOOTBALL GLORY, THE HONEYMOON IS OVER FOR MAYOR QUINTON LUCAS AS POLITICAL CRITICISM STARTS TO RISE DURING THIS DIVISIVE 2020 PRESIDENTIAL ELECTION SEASON!!!

Every politician has problems but Quinton still has more potential than most. I may not agree with him on everything but I'm certain that he was a better choice than Jolie.

It was all a big con. A few of us tried to warn you but it was impossible for KC to pull it's head out. Jolie and Quinton had nearly identical voting records. They are essentially the same politician. The only difference is style or brand or fashion choice.

I'm so glad that MY Mayor is Katheryn Shields.

Lucas is a huge freaking joke. I will no longer even refer to him as Mayor. He isn't worthy of the title.

Hey's no Mayo Pete that's for dang sure.

Mayor McDrinkerson sure doesn't want to hear about all the murders, infrastructure problems, corruption, incompetence, and bankruptcy! Do you want a selfie?

He does realize that he has a job to do right???

We hired you to do a job, not dance around like a Kansas City faggot!


All these politicians and pro-weed activists will regret their moves in the years ahead. Just ask the mayors of the cities or governors of the states (those who give candid response...unlikely) how this has impacted their budgets negatively, rising homeless population.

I'm not a believer in this activism, I believe it's counterproductive. You can't dispute the numbers.

Detractors will say I'm not open minded enough, I assure those who care will believe me I am. I truly want what's good for everyone and don't believe this is in everyone's best interest.

Barack Obama proved that a well spoken black person can make it all the way to the Presidency of the United States without having actually accomplished much of anything. Taking strong positions on controversial issues, voting anything but"present" as an elected official - these are things that could come back to haunt Lucas and make it more difficult to ascend to greater offices than Mayor. Lucas knows it, so don't expect him to lay off the selfies.

When will Squintward put the Paseo street signs back up?

No more student loan payments. Now he can afford to buy a home and fork out for fraudulent property tax increases like the rest of us.

Vote NO on the fire sales tax increase.

No Q, we payed off your student loans

Didn't anyone else notice Kathryn Shield (or her husband) in the background at the Mayor Selfie events? Jolie Justus built up a relentless parade of naysayers for each and every vote. Mayor Selfie just doesn't even show up for the vote. The situation is even worse without a city manager as no one is watching the house. The city council members are working on personal agendas due to lack of leadership. Jolie Justus was the only candidate with wherewithal to go to battle with Kathryn Shields. I didn't vote for Mayor Q.


NO, Lucas is so stupid he either didn't listen to Gov Parsons or he misunderstood. The later is most likely Lucas is ignorant!

Lucas is turning out to make Sly seem to have been a statesman.
Which means the bar continues to lower in what passes for local government in KCMO.
Lucas doesn't dress like a clown like Sly, but he sure acts like one.
Cheerleading smiley selfies Lucas.
It's going to be a very long four years KCMO taxpayers.

For those who don’t do Ebonics that’s impeach fifty five, smiley selfies Lucas is, you guessed it, #55

How about Quinton Lucas remain atop the Liberty Memorial until the YTD homicide rate is trending less than 2019?

He can even send out as many selfies, tweets, and mayoral proclamations as he deems necessary.

Detroit is a not too distant future.

We’re paying his rent now so no wonder he “supposedly” paid off his school debt even though we all know the taxpayers paid for everything his whole life.

Negro Economics, Jo Jo Dancer this is your life.

Quit being so negative. He has attended our homes association meetings when no mayor since Kay Barnes has. He is busy, he is enthusiastic. He tries to build enthusiasm, but wake up Kansas City, that's what we need. I didn't support him or Jolie during the election but Lucas is sure giving us all reason to support him in the future. Remember what we came up from, sly and the funk. Wow at least we have somebody with an ear and a brain.

^^^^ True. There is hope here even though some of the boomers here seem to have already made up their mind.

A couple of boomers at KCPD isn't pro-weed, but the majority of the dept and state of Mo is!

Lucas is a Dumbocrate! - any guestions? Everytime you hit a pot hole remember lip service doesnt fix streets!! After Trump wins the next election, and after he serves out that 2nd term, we need Trump to come clean up the shit local government swamp we have here in KC!!! Trump for KC Mayor in 2024!!!

^LOL. Everyone please use the #MayorQrime hashtag as your own

That is an ugly stadium architectural drawing. Please don't try to make the Stadium facade blend in with the Soviet - Stalin era Jackson County and City concrete ugly-ass buildings.

Kaufmann Stadium is beautiful. Leave it where it is. Billionaire owners and multi-millionaire fans do not need more of our tax money (your's and my money).

Fix the potholes; provide police protection, fix water and sewer lines; you know the basics for human civilization that taxes were originally intended for.