Not so long ago the right wing was burning their Chiefs merch and pouting over the NFL Star Spangled Banner controversy.

Now, after an impressive Super Bowl victory and a great deal of fan love shown to Kansas City footballers . . . The tune has changed.

NOTICE THE RIGHT-WING ENAMORED WITH TRAVIS KELCE OVER HIS SHOW OF EXCITEMENT FOR AN UPCOMING WHITE HOUSE VISIT AFTER THE KANSAS CITY CHIEFS SUPER BOWL VICTORY!!!

It's not quite a Prez Trump endorsement but high praise for the gesture of respect reveals that Conservatives are desperate for consideration from the young, wealthy, trendy NextGen.

To be fair, and remind our blog community that things change . . . After the Super Bowl win TKC has decided to stop calling Mr. Kelce "Fake Gronk" or "Great Value Gronk" . . . From now on, his new moniker around this dump is "Kegger Kelce" given so many of his boozy antics amid Super Bowl celebration. 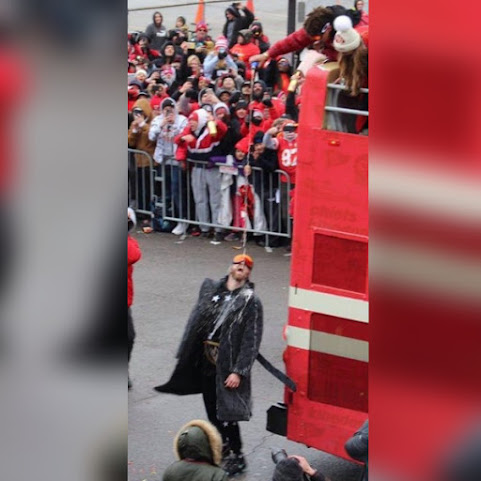 Here's the link collection from Conservatives who have now turned into KC fanboys like the rest of the nation . . .

Hey, he could've been a hater but decided against it. That's a good decision that also benefits fans. A wise Kegger choice for once.

Take a knee. Vote for a commie and endorse a man not knowing what public bathroom to use. Then you'll be praised.

^^^ DUMB-ASS. He's getting Conservative love RIGHT NOW. A ton of articles about his excitement. Are you that much of an F-ing moron? Just a reflexive trumper idiot or a Russian bot. Learn to think and read you dipstick!

^^^ Um, you might want to take your meds there as well.

This trip was supposed to happen weeks ago. Was the invitation lost on the mail? Did Trump address it to Kansas?


Did you know that Barack Obama just had his whistle blower Philip Haney knocked off a few days ago for exposing his involvement with terrorists?
Take a knee pussies Trump doesn't want you in the white house anyway you people are a waste of time. BTW I don't see any of the knee pussies doing anything about their so called suppression do you????? Well of course you don't and you won't either.

"Kegger Kelce" Such a true and fitting name. 5:20 thinks the whole world is on dope and dumber than he is.

5:17 has the syntax of a Russian bot. Or maybe Trump himself. It's certainly not English proficient.

The top 5:13 must not be able to read basic posts. Or they endorse pissing with a little girl at Independence mall. Maybe a reach around wanted by the dumbass calling others names.

"Thanks for coming all the way from Kansas," the President will probably say.

Regardless of who’s in office, I think Kelce nailed it by calling it a “unique opportunity.” Getting invited to the White House is a memorable event no matter who the sitting president may be.

^^So should acting proper in a parade in the city you play in and not acting like some drunken frat brat.

You can sure tell the people that "endorse " deviant sexual practices. Twice they have replied to people by calling them names. Butt hurt over the ass sex and kid love ? Speaks volumes on their character.

You all Hillbillies might better focus your attention on the proposed Injuin mascot / name change. Your Chiefs are most likely over. Maybe find a Transgender appropriate name to fit in with these PC replies . Both for the Chiefs and the crybaby racist fans.

^^^^^ never gonna happen. Please get your dumb politics out of MY football. That's all I've ever asked.

"Did you know that Barack Obama just had his whistle blower Philip Haney knocked off a few days ago for exposing his involvement with terrorists?"

Do you really believe that nonsense?

Trumpettes are so stupid.

Byron is out of our money, silly bastard who was butt fucked by his Dad has to wait 1 more day for our check. Leap year sucks when you are a crook.

Pondering how Social Democracy will support the Chiefs or the NFL. LOL Not at all. Enjoy the rewards of worrying about MY FOOTBALL , as one said. Had no idea you owned a team. It is all relevant. The same people going to remove the Chiefs will remove your team , the NFL and your pathetic world. Nov 2020 is going to remove your Team and your ignorant lifestyle. I can then have healthcare, fuck your capitalist greedy wants.

It sucks to be a welfare cheat in February during Leap Year, doesn’t Byron? Did you know your brother Mark was in KC a few days ago and people welcome him and talk to him? Conversely, no one wants to hear anything from you, you lying, thieving fake.

Hey bLIEron, Epstein didn’t kill himself. Everybody knows it was arkanside!

Your boy Barry has committed many murders of people who disagreed with him, he learned well from the clintons.