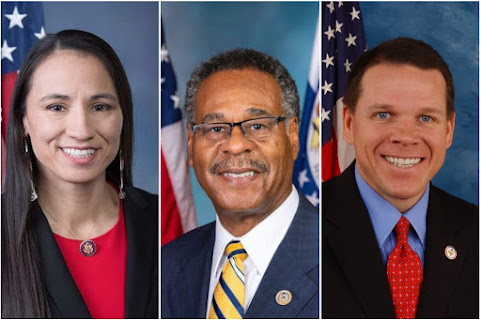 Just a bit of nice news because this could be the last bit of civility and bipartisan cooperation we'll see for the remainder of 2020.

“I’m so incredibly proud of this year’s team and their unrelenting desire to bring the Lombardi Trophy back to Kansas City after 50 long years,” said Congressman Emanuel Cleaver. “As a lifelong Chiefs fan who has had his heart broken a time or two, it’s difficult to put into words how special this season has been for our great city. It wasn’t always pretty, and it certainly wasn’t easy, but the people of Kansas City wouldn’t have wanted it any other way. I know Patrick Mahomes must be getting used to having his name written into record books, but he can now add the Congressional Record Book to the list. On behalf of Kansas City, Missouri, thank you for the magical run.”

“50 years in the making, this is a huge moment for all Kansas City Chiefs fans. Their incredible 4th quarter comeback—driven by grit, determination and faith—truly made Kansas City and Chiefs Kingdom proud. It’s an honor to recognize them in Congress on their outstanding season and Super Bowl victory,” said Rep. Sam Graves.

“It’s been an incredible season for Kansas City – made even better by our hard-won victory on Super Bowl Sunday. I’m glad to join my colleagues on both sides of the state line in recognizing this special team,” said Rep. Sharice Davids.
#######

Very nice for history even if Kansas City will fight about it today.


If these politicians would show this much enthusiasm for their jobs and the people in their districts things would maybe be better.
Sharice Davids really did a number on gullible people didn't she. Taking a veteran to the SOTU tonight. I wonder if that vet knows she wants him dead. Remember her shirt "all of my heroes killed colonizers." Sharice Davids is a piece of S**t and anyone who falls for her BS is the same.

They’re too late, it’s already been asked for, and it wasn’t by these clowns either!

TOP PHOTO -- A HOCHUNK, A FLUNK, AND A PODUNK