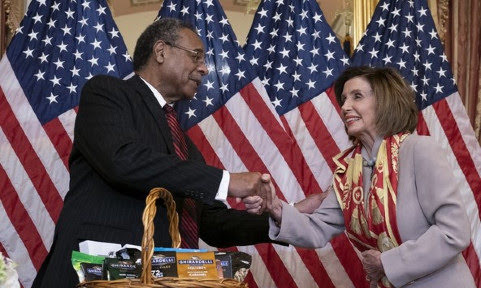 Press photo op nice news speaks to this town's glory and a Democratic Party connection from the Midwest to the Left Coast:

Bernie Bros and Mike Bloomberg have been relentless in their push for power and have captured the NEXTGEN support along with more hopeful liberal allies who rank among the loudest and most frequent voters.

NASHUA, N.H. - One clear winner has emerged so far from the Democratic presidential contest, according to strategists aligned with the presidential re-election team this year - Donald Trump.

There is deep frustration among Sanders's supporters and allies over the historic meltdown of the first-in-the-nation caucuses. The race is too close to call, but the late results trickling in appeared to be breaking in Sanders's direction and there's still a chance he could win both the popular vote and a plurality of delegates.


Democrats Viewed as Divided, but Satisfied With Candidates

Story Highlights Two-thirds of Americans consider the Democrats divided rather than united Majority of 56% consider Republican Party united Supporters of both parties satisfied with choices for 2020 nomination WASHINGTON, D.C. -- With 11 Democrats vying for their party's 2020 presidential nomination as the primary season kicks off, 65% of Americans describe the Democratic Party as divided while 34% see it as united.

Dems Doing It To Themselves

The Trump team has already spent much of the last several weeks stoking Democratic discord, pushing the idea that the Democratic establishment is working to deny liberal insurgent Bernie Sanders the party's nomination.


Klobuchar: 'We need to build a big tent' for anti-abortion Democrats

Democratic presidential hopeful Sen. (D-Minn.) on Tuesday said that the Democratic Party should be a "big tent" for people of different beliefs, including those who oppose abortion rights. Klobuchar, who is running as a centrist candidate and alternative to Sens. (I-Vt.)

President Trump ramped up his outreach to black voters on Friday in a speech aimed squarely at highlighting policies he says are helping provide jobs, education and opportunities. In his first policy speech since his State of the Union address on Tuesday - which also highlighted his outreach to the African American community - Trump traveled to Charlotte, N.C., and announced a new addition to his team.


The Exhaustion of Listening to White Presidential Candidates Discuss Racism

South Carolina Was the Prize in the Democrats' New Hampshire Debate What Twitter Has to Say About the Friday Democratic Debate Trump Is Flaunting His Impunity Scared of Bernie? Not Feeling Pete? Your Unity Candidate Is Running Out of Time. By Friday evening, I was already over it.

Brokered Convention = serious violence. The Bernie Bros. are inclined to bike locks in socks and sucker punching those who don't want to send 70% of their income to Washington D.C. to let crooks like their opponents (The Clinton's, the Obama's and the Biden's etc.) piss it away on regrettable, irresponsible, pie in the fuckin sky schemes.

The New Green Deal translated, means all of YOUR Green will be pissed away on Free Health Care for foreigners and you and your whole family will have to get extra part time jobs to pay for Health Care, College and Government bennies for people who hate you and hate America, so they can sit at home and watch "The View".

I know, I know..., I'm a racist because I don't believe in burning the American house to the ground in search of validation on social media from Progressives who have the IQ of a fuckin mosquito.

Bernie won't get the nomination, the ruling elite in the DNC won't allow it.

Peelosi is a drunk retard.

Well chuck, at least you know it finally.

There's no reason to get excited. This happens during every primary season. It doesn't matter who the nominee is, they will beat Trump.

Consider that 67% of the population thinks he should have been removed.

The Democrats are a complete joke. Look at their 5 best candidates. Two old white losers, two dumb cunts and one homosexual.

Can't help but remember what Steve Glorioso said about the 2016 Election...

"Both Parties have nominated Candidates who are not fit to be President, and the tragic thing is - one of them is going to lose!"

There's no reason to be surprised. This hapless DemonRat, bLIEron/5:33, is lower than a primate. It doesn't matter, he isn't normal, and he's Trump deranged.

Consider that 99.67% of his pea-brain functions at retard.

^^^ And what do you know about paying taxes, Oh Boring One?

bLIEron getting his stats from the communist news network (cnn) again? Not even close retard and that hurts you doesn’t it! Hahahahaha!

What bLIEron meant to say was 67% of the dimwits wanted him impeached!

The republicans were smart enough to know it was and has been a sham and a witch hunt since day one, you're brain dead bLIEron.... and so is the dimwit party! Hahaha!

So much shame in being white,gosh

And that's why Steve Gloryhole is wearing a wood suit today!

Byron wants to be eggplant, at least on the inside.

Byron gets proven wrong time and time again. Goes to prove you can't educate stupid people no matter what.

^^^ Doesn’t matter, the dnc won’t allow these two to win, nobody wants a socialist and they sure as hell don’t want to be the first party to have a faggot for President, two men butt f**king in the White House...... god help us.

^^^^^But James Buchanan may have done it before Lincoln did.

Pressure is getting to the Chimp!

Democratic party will split in half. Too many far left for the center right to accept. Make America a Wetdream does sell well to the adults of the party.

Byron, you have run out of OUR money already? You are a stupid fuck thief.
Lets make a bet, your President Trump is not reelected I give you 10,000.00( thats ten grand)
Trump wins you kill yourself.

Not one of these sniveling leftist traitors can run a food truck. Do you honestly think a fake Indian a queer a commie traitor or a thieving frowning do nothing idiot ex Vice President that’s done nothing in FOURTY YEARS can hold a candle to trump your on acid oh and don’t forget the sawed off frowning Jew bastard from New York that everybody hates he’s a real threat. The whole group of morons wouldn’t last two hours in my business before they’d be shown the door face first

Byron, you’re a welfare cheat and a disability fraud. Basically you’re a piece of shit.