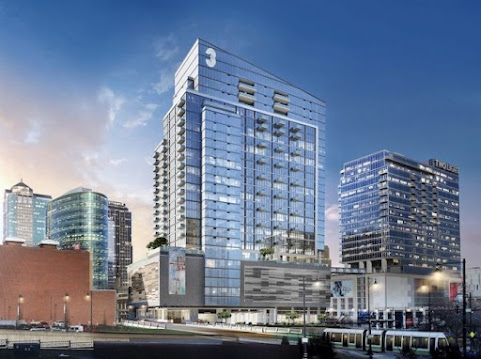 Downtown Kansas City "momentum" continues as residents will pay for luxury convenience that will be inaccessible to all but a few locals.

"The Cordish Co., which won city approval in 2018 for the incentive package for the $150 million project, has submitted its final drawings to City Hall and has hired J.E. Dunn Construction to build the 32-story tower. Monthly rents at the 321-unit project are expected to push new heights as well, ranging from $1,400 for a studio up to $7,000 for a penthouse club apartment."

Of course, here's what this hack glosses over and what Downtown boosters don't locals to know . . .

"Among the incentives approved for Three Light is a $17.5 million subsidy the city has agreed to pay for a parking garage for Three Light — as it did for One Light and Two Light."

Credit where it's due, very few people are "all bad" . . . The hype website let this deet slip for careful readers . . .

"The lower level of the garage will have 75 parking spaces reserved for Power & Light patrons."

Given that DOZENS of cars were towed this week and parking around the loop is getting scarce . . . We understand the parking concern . . . Sadly, space for luxury vehicles will be paid by increasingly cost-burdened residents who could never afford the rent in this ongoing scam approved and endorsed by City Hall.

Now that is what we can call "Momentum" welcome to Kansas City, now pay the 1%

How many "Lights" are we talking about? Marquee???


One fish two fish red fish blue fish. Dr. Seuss says pay up tax payer. Just wait until they start the project over at the four corners! Troost and Armour. Suck it up people your ignorance voted for this. Maybe the chiefs will fund it for you and give you a free dog to go with it.

This welfare for the 1% of Kansas City provided by regressive democrats of KC.

Will no one rid me of these troublesome potholes?

Cordfish feeding at the city's trough again? That pig is getting fatter by the day as the city's citizens get poorer.

^^Speak for yourself bruh. I am raking it in off Trump's economy. Remember, you are responsible for your shitty station in life. Work harder bruh. MAGA bitch.

^^^ That is a somewhat decent troll but doesn't really nail it. You should have called him a CUCK too.

Disgrace to kansas city to pay for this garbage such a shame.

Thanks for the free parking suckers!

I’m all for people spending their money how they want, but it seems like such a waste. Our downtown is okay but other cities blow it out of the water. I would not want to live in our downtown right now. Plus the commute in kc is so doable.

Hey I’m all for living close to work if you can (and if you don’t mind not having distance between you and your work life), but let’s not also pretend the rent being changed here is normal for the city.

Is there any reason why Kansas City is paying for this?

Did we get to vote on it?

Kansas City never votes on ANYTHING. Voters opinions are not encouraged.

When did we get a chance to vote against corporate welfare in any election? Donkeys and Repugnants all love it.

With Mayor McDrinkerson on hand for a selfie!