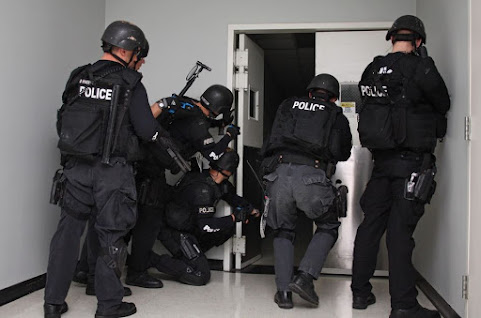 As our blog community has noted time and time again, the Federal government is the largest employer in the Kansas City metro.

Tens of thousands of those CIVILIAN workers are concentrated inside the loop. Since 9/11 there has been increased security in and around KCMO but streets surrounding government complexes remain open to the public and still serve as busy traffic thoroughfares.

Remember that there has already been talk about shutting down traffic along Main street as a tribute to the toy train streetcar. The growing threat of terrorism could inspire authorities to cut off or closely monitor more streets in order to keep so many Federal complexes safe.

"In most big cities the streets around Federal buildings are now completely blocked off. KC strives to be a major American population center so . . . Sooner or later that's going to happen here. In fact, in the new world we live in I wouldn't be surprised to see most Downtown streets cracking down on traffic. For the average Joe this will mean a heck of a lot of parking tickets will be written in 2020. And workers might want to consider the prospect of a 2nd commute from their cars that might now be MUCH further away from downtown offices."

To be fair, KCPD has not given any guidance about a Downtown security crackdown and this fact has been less than reassuring to many workers who might feel comforted by some/any guidance on the topic.

And so, this inspires our latest Prez Trump and Iran news update focused on the homefront . . .

The Department of Homeland Security issued a National Terrorism Advisory System Bulletin in the wake of top Iranian Gen. Qasem Soleimani's killing in an airstrike ordered by President Donald Trump.


Iran condemns Trump as 'terrorist in a suit' after attack threat

Iran condemned Donald Trump on Sunday as a "terrorist in a suit" after the U.S. president threatened to hit 52 Iranian sites hard if Tehran attacks Americans or U.S. assets in retaliation for the killing of military commander Qassem Soleimani. "Like ISIS, Like Hitler, Like Genghis! They all hate cultures.

President Donald Trump on Saturday warned Iran that the U.S. is targeting dozens of sites to be hit "very fast and hard" if it retaliates for the killing of Iranian military leader Qassem Soleimani. "Iran is talking very boldly about targeting certain USA assets as revenge for our ridding the world of their terrorist leader," Trump tweeted.

Disgraced former NFL quarterback Colin Kaepernick attacked the United States on Saturday for conducting what he described as racist "American terrorist attacks" driven by imperialism, which appears to be his response to U.S. military forces killing Qasem Soleimani, the head of the Iranian Revolutionary Guard Corps (IRGC) Quds Force, which is a designated terrorist organization.

It didn't take long-the first attack on a U.S. government website hit on Saturday, a day after the killing of Qassem Suleimani in Baghdad. The fact there was an attack is not a surprise- speculation has been rife. And the style of the attack is consistent with the nature of the primary cyber threat we now face.

Reassurance From Wrong Side

The military adviser to Iran's Supreme Leader said Sunday that his country's response to the killing by the United States of one its most influential commanders will certainly be a military response "against military sites."

Major US cities have announced increased security in response to concerns over threats stemming from the Pentagon's killing of Gen. Qassem Soleimani, a top Iranian military official. Tensions have flared among lawmakers and activists who criticized President Donald Trump's orders for the move, which sparked concerns that tensions in the region could spill over into targeting of US cities and entities.

I think police are prepared but KC is playing things cool for now. Better not to worry people and increase security gradually rather than all of a sudden.

^^^ Agree about a gradual security increase, that's the way it has usually been done in the past.

So, does this mean that those ridiculous KC neck beards are now going to go out of style? It's a small blessing but still a big favor.

Are the Trumpkins lining up at the recruitment stations yet?

No, but all those infected with TDS are heading for their basements.

^^^^So the chicken hawks are still in power.

Why is kc worried? There’s nothing here of any value, no strategic infrastructure, nothing, other than a bunch of scaredy cat coocoo left wing nuts that’s about it...... on second thought!

If kc got bombed nobody would care, this is flyover country and the only people that know kc exists are the ones that live there, bomb it, who cares

A bulletin indicates "current developments or general trends regarding threats of terrorism," as opposed to an "elevated threat" or "imminent threat."

When police were called to the Jackson County Executive's office, they reported no adult supervision present!!!

What gubmint workers in kc are demanding is paid time off, take city hall as an example, the mayor, clowncil and all upper management will be awol until the “threat” is over leaving the labor class in the building to do all their work. Works every-time!

I’m telling you, watch what happens when somebody leaves their lunch box on the steps, it’s a riot to the exits!

Nothing is different today than it was yesterday. Were Iranian proxies involved in bombings and murder before Suleimani's death? Yup. Was Iran directly promoting terrorism toward US, Israel, and allies prior to the killing? Yup.

Was the US killing Iranians by drone long before they took out Sulemani? Indeed . . . and at a far greater rate than at present.

The only things different today are the hysterical reporting by the media and the blatant political reasons to speak either for against the recent whacking.

As far as KC federal buildings being in any greater danger now than they were a few days back . . . give me a break.

Colin Kaepernick??? Who is she?

Colin Kaepernick is ample proof of what happens when an idiot has too much money. Just think what a cluster fuck Byron would be if he had a few dollars

kaepernick: no football in his future/all in the past as al sharpton, wishes be the 'new' racist con man of the day - two light-skinned negroes (as noses theirs grow by the day) - no waiting; can't find even .2¢ worth of integrity in either's small coin purse intellect.

The same people that have been trashing the police now want them to protect them.

What we need is a Colin-oscopy.

I am a federal worker Downtown. This is all news to me. I will believe it when I see it.

We have bomb barriers and bomb proof glass in place currently.

Don't worry Federal workers, no body is going to attack a bunch of worthless lard-asses like you.

Colin Kaepernik is a fucking clown

He should shut the fuck up

He took a knee to protest getting benched for Blaine Gabbert and then lied and said some bullshit about social justice and his entire movement was born. Lying ass clown and nobody should listen to that idiot. His 15 minutes was up quite a while ago, now go away Colin.

My former Mission Kansas, IT consulting company boss/owner is more of a local threat than iran. His spending of every cent on his cocaine habit has brought the cartel members to kansas city. Murders are the result. Now cartel members dine and shop amoung us in joco.

10:21 You are right. Local american drug (recreational) users have brought the murderers from mexico cartels to this area. Cartels have money - so they eat out in nice places and shop at Town Center. They walk around with pistols in the same shops as my family. They drive down the same roads. They buy places in O.P. to live. Our loser citizens that buy their drugs have welcomed them to this town. Our local citizens who give them money are completely responsible for all the murders from the jungles where coca is refined to the streets of Kansas City Ks. rest assured our local citizens will face a judgement day, after which they will be thrown into hell to be in torment forever. God is 100% against drug use.

^^I was with you until you started in with the Christian Mythology. People who believe in god are stupid, crazy & dangerous.

Are these workers the Deep State that Republicans tell us are the enemy of the people? Once again, it's not the foreign terrorist that you need to be worrying about.

^^^ atheists like yourself, who have managed to obtain political power, have killed Millions of people. They are complete moral nihilists who can not be trusted. And you are are great example. You are the one who is dangerous.
.

The Fake Byron will be at his favorite Raytown Coffee Shop this morning.