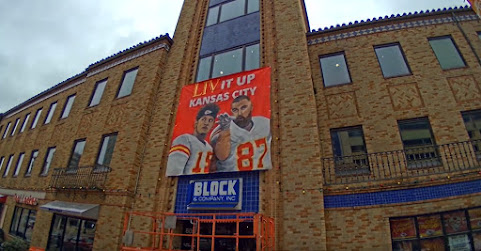 It's not all skepticism and snark on this blog . . . Accordingly, we offer this glimpse of local pride at an iconic building . . .

Watch timelapse of Chiefs mural getting painted and unveiled at Block & Company on the Country Club Plaza in Kansas City, MO.

And after the jump we've got a few nice, interesting and even some thought provoking Chiefs news for local fans, like TKC, who want to see the Chiefs win the big game:

9:04 AM ET Adam TeicherESPN Staff Writer Close Covered Chiefs for 20 seasons for Kansas City Star Joined ESPN in 2013 MIAMI, Fla. -- Bobby Bell won a national championship in college at the University of Minnesota and later the Super Bowl when he played for the Kansas City Chiefs.


Kansas City Chiefs teammates love QB Patrick Mahomes as 'one of the guys' ... even if that's not really true

AVENTURA, Fla. - The realization of what Patrick Mahomes' reality is like occurred belatedly to Austin Reiter. "It's kind of funny, I think what a lot of guys on the team don't realize is how much of a celebrity he is," Reiter, the starting center for the Kansas City Chiefs, told USA TODAY Sports.


Travis Kelce Net Worth: Just How Much Is the Kansas City Chiefs Superstar Really Worth

Travis Kelce has built an impressive career as a member of the Kansas City Chiefs. The five-time Pro Bowler is looking to win his first Super Bowl with the team and has been an integral part of their success over the years.

LIBERTY, Mo. -- Mickey Cashatt has been writing poetry since just about the same time the Kansas City Chiefs were formed. But she'd never really been inspired to write about the team until the Divisional Round game and their comeback against the Texans.

KANSAS CITY, MO (KCTV) -- A lot of Chiefs fans not in Kansas City or Miami during the Super Bowl will use Facebook to connect with other members of the Kingdom. There's a group that offers more than a watch party. Kansas City Chiefs Fans Against Cancer is a Facebook group just for people fighting cancer and their supporters.

PARKVILLE, Mo. -- To some fans, memories of the Kansas City Chiefs most recent Super Bowl appearance aren't so distant. Fuzzy football flashbacks snap into focus when the "One Shot Deal" crew assembles. They're the remaining faces from a group of 13 fraternity brothers who attended Southwest Missouri State University in the 1960's.

Fifty years later, Jan Stenerud still remembers just about every detail from the Super Bowl.The longtime Kansas City Chiefs kicker remembers that they were almost two-touchdown underdogs to the Minnesota Vikings, whose fearsome defensive line carried the nickname "The Purple People Eaters."He remembers that the weather wasn't very good in