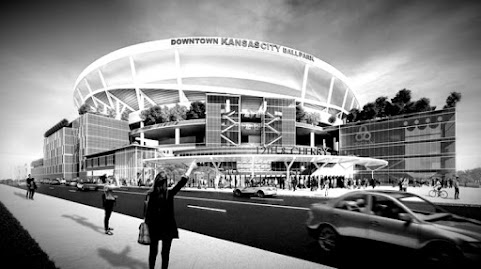 At least that's what these bored designers hope as they attempt to drum up biz . . . Checkit:

"Kansas City-based Pendulum Studio launched a new website offering an interactive model of the proposed new stadium, which would be located on the east side of the downtown loop.

"On the website, KansasCityLovesTheRoyals.com, the firm behind the rendering said that while no on asked for their opinions on building a new facility, they worked with a “group of like minded Kansas City based business owners” to create a vision for the boys in blue that put the team downtown."

It'll totally work. Everybody just needs to kick in a few grand to make it happen.

It looks like a minor league park with about twenty thousand seats, stupid to think a new downtown stadium is gonna fix or help anything

So much for getting the streets or anything else fixed around here, just another gigantic bill for the taxpayers to cover, on top of the 3 billion we already owe. #onlydowntownmatters..... year number 9

KCMO hipsters will fall for it. Jackson County taxpayers will pay for it. Closer to Johnson County so why not.

100 years ago the big thing cities built to show how good their town was, were courthouses. Today it’s stadiums
Have these geniuses ever thought the what would make the city the envy of the country would be stopping crime, cleaning up blighted areas and have no homeless bums sleeping on the streets?
Make history Kansas City, be the first city to actually spend that money on people and quality of life

So I’m guessing they’re putting this at 12th and cherry, at least that’s whats on the marquee anyway

I thought MLB required all home plates in new stadiums to face east. So, the crowd in this case would look east - to nothing, The downtown KCMO skyline would be behind the crowd. Also the potential for a pedestrian connection to downtown would be nonexistent. The east loop would prohibit that. Not a fan of a new stadium at all, but at least do it right. However, this is KC, nothing is ever thought out. It’s ALWAYS bassackward. Forever a cowtown.

They’re gonna need at least fifteen acres to build this stadium and where they want to put it is nothing but downtown parking, where are all the parking spots gonna go that are there now and Jesus Christ how much will that cost to buy them out, this really is the most terrible idea evar.

KC can't pickup the trash, crime is out of control, the infrastructure from sidewalks, streets and bridges are failing, the fire department and police department say they are underfunded and asking for a tax increase. So KC has an extra couple of billion to build a baseball stadium. What are these people thinking.

KC has always been a sports town and this week proves that the investments have paid off. This is a good thing and it will be good for the city, create jobs and make downtown even better.

@9:44 Baseball fans will be expected to park anywhere within walking distance to the street car line and take it into the downtown and walk again to the stadium. Parking will not be part of the plan. This is why the street car was built along its current route. To deliver people from other population and parking areas into the downtown for a new baseball stadium. This had been the unspoken master plan of those few pulling strings in this town since, well, since the street was conceived as a precursor to a new stadium.

Just fix the potholes and hire some cops!!!

Quinton had the guts right out of the gate to fire the city manager for all his shenanigans on the airport single terminal. Let’s see what kind of mayor he will be. Let’s see if he can hold his own against the forces of those who want a new stadium. Those breathless near sighted naive community boosters who cheer lead at building anything may find a mayor as stubborn as he is smart and will likely put them in their place.

Let’s let the black people pay for it.

You don't live in KC, chuck. What business is it of yours, other than none? You leech off the VA like Byron and have had too many electrical shocks which have clearly left you brain damaged.

I don't give two shits what happens in Prairie Village so I don't start flappin' my fauces about it.

10:20 chuck is a valuable contributor, you, you just suck

Its a joke, there isnt room for a stadium downtown. Really, its a joke

Because Kansas City doesn't have enough money to pay its bills, it has a $1.6 billion financial hole.

Another 2.6 billion in debt for this thing, streetcar extension, bike lanes and we'll be on the path to prosperity in no time. And it won't cost taxpayers a dime!

Put it to a city wide vote.

The city hasn't even paid for the airport yet and they are looking at more pie in the sky silliness?

Sory guys but I won't be attending games there!

Oh, Chimpy the Poo Flinger Punk/10:20, you live in a taxpayer provided smelly zoo cage where you stick bananas up your monkey butt.

Now, Chimpy/11:24, stick to what you know best, which is picking peanuts out of the other funky monkeys' poo!

Which taxpayers are going to be asked to pay for this con job?? Not KCMO, after we say no to Quinton’s firefighter bribe!!!!

Put that idea in front of the sharks on "Shark Tank" NOT one of them would invest in a team that stays losing!!! Building a new stadium wont get the next win!! What a new downtown stadium will do is make greedy local government richer, pot holes will get deeper and fuck up your car worse than last year!!! The stadium where its at works! VOTE AGAINST a downtown stadium, most voters wont be able to afford a ticket if they do it!! But its not about the voter of Royals fans, its about politics plain and simple!!

^^^ Fuck off dick head - Us Fire Fighters would love a downtown stadium, we can troll for pussy on game days and get less heat trolling on the plaza or in Westport - US FF's vote for Bernie, actually the IAFF sent us a letter instructing us to, and we here at KCFD do what we are told! proud to serve as FF's even though we care less about the public who pays our wages! This job rocks unles you try to fuck the chiefs wife, this is a good gig!!

As a Kansas City resident and taxpayer - nearly $3,000 cash paid in December. No kids. My trash can't get picked up on a consistent basis. City doesnt clear roads in snow when suburban counterparts get it right every time...left up to me, a registered voter - this would be a no vote. Just look at the airport fiasco... it will be an ugly mess that I and other resident tax payers will be paying for a lifetime. Its just not worth it. Move the Royals and Chiefs to Kansas... that would eliminate the cultural misappropriation Kansans seem to parttake in calling themselves Kansas Citians when theyre from an entirely different state with different laws governing them. No. Go San Francisco!

In case no one noticed, baseball is dying.

how about the city fix the potholes first?

The stadium will remove thousands of downtown parking spots.... where are the people that work downtown gonna park during the work week, excellent point 9:44!

Why not build it in Johnson County? Residents would be glad to pay for a new stadium if it is over here. Kansas City and Jackson County residents keep bellyaching about the fact that we patronize the sports teams, so put one over here. Lots of restaurants and shopping already in place. It is safe, and we have plenty of room. Everybody thinks we are so rich anyway. Let us pay, but let us have it over here. Why not?

IT's happening..you geriatric fucktards don't go to games now, so your opinions, like stupid dave's, don't matter. Get used to it or die off.

As long as the Royals are paying for it themselves, with no tax money from KCMO, and as long as it replaces either of the Money Pits at 18th & Vine or at the Power & Lights District, GO AHEAD!

NOTHING ELSE IS ACCEPTABLE!

I say facing east is a great idea so the people attending the game won't be facing the sun.

8:00 you poor baby, just can't stand it if someone speaks the truth. Pull your head out of your ass and wake up.

So it should be on the western side of the downtown, north of the Marriott, so the crowd and cameras can see the skyline. It’s just common sense. Which means nothing in KC.