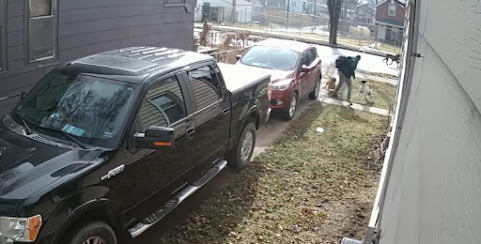 A repeated call to action and consequences to recent privatization effort from 12th & Oak.

Dangers Increase for Residents As Stray Animals Are Left To Roam

Security camera footage shows a local woman in the northeast area of Kansas City being attacked by three loose dogs.

With fewer animal control officers in the wake of privatization and stray/aggressive animal calls not being dispatched regularly, threats to Kansas City residents are on the rise. Both SNKC and Chain of Hope continue to be very concerned.

“This shows the repercussions of not having enough officers on the streets after the vote to privatize our animal control department without an interim plan,” explained Michelle Rivera, founder and CEO of Spay and Neuter Kansas City (SNKC). “This isn’t the only incident we’re aware of and it’s scary. With animals being left on the streets now, it’s just a matter of time before something really awful happens.”

The security camera belongs to Linda Rowlette, who heard the woman screaming and ran outside to help. “We were watching TV, and we heard these dogs barking and someone screaming,” Linda said. “And we stepped out, and we seen her coming around to the passenger side of the car, and then she fell to the ground. And if we hadn’t come out there, those dogs would have mauled her. I mean, they would have hurt her badly. She told us she was not afraid of anything, but she said she thought she was going to lose her life right then and there.”

Rowlette also mentioned that this wasn’t the first attack she witnessed by those same dogs.

The city council voted to privatize animal control in June of 2019, and Kansas City began losing officers shortly thereafter. And because of privatization, those positions aren’t being refilled at the moment. That leaves fewer officers to handle the calls that come in, regardless of whether those calls are for stray, injured, aggressive or abused animals.

“There is an attempt right now to get temporary help at animal control,” says Rivera. “We appreciate the effort, of course, but honestly, it’s a really tough job that requires training. Who’s going to want to take a job that hard knowing it’ll just end?”

Both SNKC and Chain of Hope have been checking animal control calls on KCMO Open Data and have gone out on stray calls daily, impounding over 20 pets each and responding to over 50 calls each just the last 30 days.

Upon visiting the scene of the attack and talking to Ms. Rowlette, SNKC staff were able to obtain the video and also discovered that the dogs in question have attacked others in the last week as well as possibly killing other pets in the neighborhood. Staff also learned that the dogs are owned but escape from a backyard when the owner is at work and, in fact, observed them at large Wednesday evening. Staff also contacted animal control to help with the situation but it is uncertain of a response at this time.

SNKC is asking animal control officers from the greater Kansas City area (both sides of the state line) to call SNKC if they’re able to provide voluntary support to the organization during this crisis. .

Full disclosure: after obtaining the video, it was determined that Ms. Rowlette is related to a member of the SNKC staff.
############

Have noticed the dogs running around have been worse here in Midtown. And that's rare. Thing of it is, if it's bad now just wait until Summer. The dogs get even more dangerous then.

There is NOTHING that KCMO can't screw up. Thanks for another example.

Those be good dogs. The jus be playin’. They dint do nuffin

They were just starting to get their life together?

The "no kill" animal shelter does not collect animals it cannot immediately adopt. The fallacy of the no kill animal shelter. The shelter does not have resources sufficient to maintain the animals and in turn the animals must be managed in a humane manor, including euthanasia. Frankly not all animals should be adopted. A dog or can running wild since birth is not a good pet due to the socialization required. A dog or can without contact with people from birth will not be a good pet. The city has enough abandoned animals and few will maintain a nonsocial dog or cat.

Better title for you T.

In the last several months there have been several dogs roaming regularly in my neighborhood. I'm scared to leave my little dog outside in my fence. I personally haven't felt frightened for my life but I feel for this lady. No one should have to fight off a pack of dogs just walking down the street. KCMO really fucked up giving up control to the Pet Project. All they are worried about is their brand new building ( that taxpayers are inevitably going to end up funding the rest of). The whole "no kill" shelter idea just involves shuffling around some dogs that should be put down. They also put dogs into the hand of unsuspecting families who have no true idea about their dangerous nature. "No kill" sounds wonderful but is unsustainable. God bless private groups like KC Spay and Neuter and Chain of Hope for trying to pick up the slack.

Actual animal control is not profitable for the shelter, it gets paid either way so what do you expect from privatization.

Monkeys can't run their own lives, shouldn't add other animals to their mix. Everyone wants to point fingers at organizations, try pointing that finger towards the stupid asses that let their dogs roam free and let their animals breed like they do. Endless and without reason. People are supposed to be able to reason and utilize their brains for rational decisions. Can't say that anyone that I personally know let's their dogs breed endlessly or roam free. Shelters and local government are not breeding and allowing the roaming, your fine idiot percent of population do that.

What percentage of you laptop warriors have given money to a Shelter in the last year? keep typing little bitches.

Leave it to Tony's nazi human scum commenters to project their own racist little bitch notions onto canines.

Pitbulls should be shot on sight.

It's only the truth,all they see is dollar signs from over breeding a dog that is probably a mutt anyways

Keep your dogs on a leash or in your fenced yard because you can't trust anybody else. Including animal control. But hey, if you want to adopt a pitbull there are a ton of them at Pet Project.

That's why you should always keep a dog-be-gone in your pocket. A small .22 revolver, basically used as an extension of your fist, does not require much by way of firearm training, is not difficult to shoot, is not a big scary gun. However, it will kill a dog attacking you, or at least stop the attack in its tracks. I'm often in deep rural areas for work and always have one with me. I don't know from what or how, but every single dog I've shown my dog-be-gone to (domesticated or feral) instinctively knows it is a dangerous tool and it often breaks-off the aberrant behavior immediately.

@3:48, if I knew my donos were being properly used to euthanize known dangerous dog breeds and all feral animals that were coming in to the shelter, then sure I'd donate. It's like $50 for a vet to euthanize, surely a shelter would get a bulk discount or administer the chems directly.