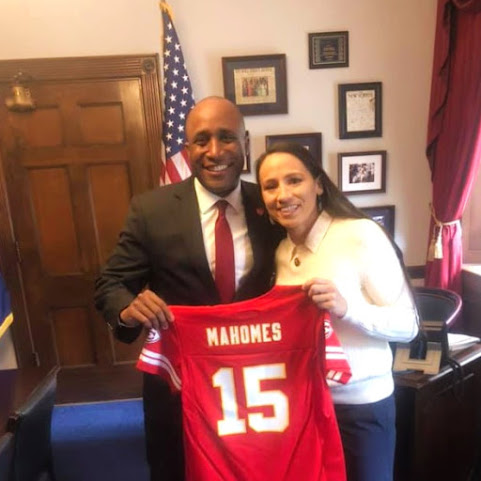 The very best & brightest readers among our blog community bring our attention to a bit of overlooked social media sharing that serves to highlight how the Super Bowl stands at the crossroads of pop culture and politics.

The official social media caption from the Kansas politico: "Repping KC and Mahomes in Washington today with Mayor Quinton Lucas! Thanks for stopping by . . ."

For further edification, we've collected this overview of the discussion from "many sides" of the debate as impeachment threatens to overshadow Kansas City's long-awaited moment in the spotlight . . .


Sports Reporter Refuses to Root for Chiefs Due to Native Name, Tomahawk Chop

Things were apparently going entirely too well and entirely too non-political, for some of members of the sports media on Sunday. Mike Wise of WUSA9 in Washington, DC, took it upon himself to shatter the woke silence with an incandescently awful take on the Kansas City Chiefs and the origin of their name.

KANSAS CITY, MO (KCTV) - The "Tomahawk Chop" has been a part of Chiefs games for decades. But the days leading up to the Super Bowl are pushing the chop onto a national stage and people are talking about it. From the Washington Post to the New York Times, the headlines are creating conversation.


'They just don't get it:' Kansas City Chiefs football team called out as racist ahead of 'Appropriationbowl' - APTN News

Jamie Pashagumskum APTN News Fans of the Kansas City Chiefs call it the "arrowhead chop" but Indigenous people are calling it cultural appropriation and they're angry that'll be on television for hundreds of millions to see. The chop is a hand gesture fans do to celebrate their team that mimics the swinging of a tomahawk.


No, cheering for the Chiefs isn't racist

On Sunday night, the Kansas City Chiefs crushed the Tennessee Titans, securing a spot in the Super Bowl for the first time since 1970. The win thrilled Chiefs fans in Kansas City and beyond, but not everyone was so excited for the team from the plains.

President Donald Trump has released one of his two 30-second Super Bowl ads, hours after presidential candidate Mike Bloomberg released his own Super Bowl ad about gun control. The spot is called "Stronger, Safer, More Prosperous." Trump's campaign said the other 30-second ad will not be released prior to the game.

His 60-second spot will be dueling on the airwaves Sunday with Trump's own ad. Former New York Mayor Mike Bloomberg's highly anticipated, very expensive Super Bowl ad had its opening kickoff Thursday morning, a 60-second spot that confronts the issue of gun violence head on, and what marks a very serious contrast to the current administration - and, likely, to a lot of the other ads voters will see come Sunday: nothing frivolous here.

TKC FACT CHECK: IT'S ALL JUST A BIG COMMERCIAL!!!

The Super Bowl is more than snack stadiums and rating points. On the first Sunday in February, America's largest television audience does something truly remarkable: Viewers look forward to watching ads. And yet, this year's ad slate threatens to spoil the party.

And so we throw it back to our blog community . .

TKC CAPTION CONTEST: WHAT DO YOU THINK ABOUT POLITICOS ENGAGING IN SUPER BOWL HYPE?!?

Did they decide to date or something? Not sure their "friendship" really helps either one as much as they think.

Better headline for you T, an opportunity for your readers to go see that Clint Eastwood movie before it leaves theaters.

Politics only ruins the game if you let it. Many more people are excited about the Super Bowl and just want to watch their team win it for the first time in 50 years.

So Is Lucas saying he's with his gay friend? Is Davids saying she is with her gay friend? I say they are both gay. So Davids must not be to butt hurt over the Chiefs Chop issue. Just two phonies who had had special privileges all their life based on being ethnic and gay. I'll say this much, they both have fucking the taxpayers down pat.

Sharice was brushing her long hair gently down...

Mayor Lucas and Sharice Davids at work, or so they think, just not working for you.

Wonder how much Lucas's playing around in Washington is costing the city? Almost appears at times he out of town more than he is in town.

Oh Chimpy. You need to be funnier! Work on that, you dumb monkey!

Stupid dave..why do you care? He's the mayor of KC. You don't live in KC! Mind your own business!!!! Jesus Christ, do you worry about what's going on in Frogville? Idiot.

^^Ha!!! Imagine someone wasting so much time commenting on a town he doesn't even live in? Oh Stupor Dave...never change!

Oh, Chimpster/11:52, you just want to play hide the banana with both of them. But, you're male, so we all know only one of them would be interested IF YOU WEREN'T A SMELLY LITTLE MONKEY!!

Yep, I call SITTING BULL on this hypocrite crap!!! said...

They've got NO PROBLEM with COLONIZERS and even GERONIMO'S PROGENY packing their CASINOS and TOMAHAWK CHOPPING fat loads of CASH into their COFFERS!!!

Team mascots based on American Indians helps keep their memory alive. Other wise the savage race the produced so little of lasting value would be totally forgotten.

Oh Chimpy So Simpy/1:05 & 1:13, you're always sticking your booger picked nostrils and big stinky butt where they don't belong. Stay in your cage and stop flinging poo covered banana peels at zoo patrons.

The white race is the most savage race.

They invaded every continent & abused the natives that they found there.

Wonder why you would care when you DON'T LIVE IN KANSAS CITY.

Is being that old that boring? Is The Price Is Right over?

Oh, Limpy soy boy, your Chimpy is waiting for you to buy more bananas with your SNAP card. He wants to play hide the bananas all day with you.

How are we "culturally appropriating" something no Native has or would ever do?

Jesus fuck. Haven't they ever heard of the Vikings or Celtics?

"They invaded every continent & abused the natives that they found there."

And introduced everything you see around you that is man made. So a few eggs got broken to make the omelet. You want to go back to digging holes with sticks to shit in ?

Except the biggest Chiefs fan I know is Native American, so yep, don't know what to tell ya.

By the way St. Louis’ streetcar line made its last run in December, 2019 when the organization operating it ran out of funds. Fittingly, it broke down on its very last run and its passengers had to walk the last few blocks of the route.

The trolley opened in November, 2018 after a decade of planning and construction. Proponents predicted it would carry 400,000 riders in its first year. In fact, it carried only about 20,000 and fare revenues didn’t come close to covering operating costs.

Typical of the mindless crap and diversion the media dishes out these days.

"2 gay Democrats pretending they give a crap about the Chiefs"

One of the likes dick and it isn’t Sharice.

It’s not a tomahawk chop. It is the motion of turning a whiskey bottle upside down to your lips. Oh crap, now I understand the cultural appropriation Lickahoe would object to.

Super Dave asked the only question I'd like to see an answer to.

How much is this running around the country costing us?

What was the purpose of this trip?

Q: What are the odds that 2 unrelated minority homosexuals with ties to KCKS/KCMO would both attend Cornell Law School in New York state at the same time (Lucas JD '09/Davids JD '10) and then return to KC becoming high-profile politicians?


Haha! Local media would tell me the true story if it wasn't just a random fluke...right?

When Quinton was at Cornell Law, he told everyone his home state was Kansas.

"..looking up to political figures in his native Midwest, including the first female governor of Kansas, Joan Finney, and former Kansas Senator Nancy Kassebaum Baker. Admiration of his state's leading female political figures was not surprising for Lucas, who grew up with his single mother and two older sisters."

And though his Wikipedia page was last updated on January 12 of this year, he's continuing to falsely claim that he was a "law school professor" at the University of Kansas.

I know that Quinton is a liar, but I hate to see all the local media constantly give him a pass. If they won't hold him accountable for the little stuff, he'll keep getting worse, and the taxpayers keep getting shafted more and more.

Clay Chastain is really looking good right about now for those of you who laughed at him.

We'll take Quinton over you any time. You got less than 1% of the vote. Please take a clue.

Since my white tribe is bigger. Everyone else can fuck off. Right Byron?

Nah, your trailer park is small and pathetic.

That Escalade you live in is much smaller. BTW your finance company is looking for you so don't park it at the chicken joint anymore.

Well now, that's a pretty picture I must say!

You know had the Chiefs been in last place this year they'd both be bitching about how Native Americans are oppressed by the team logo and demanding they change the team name to the Care bears or some shit.