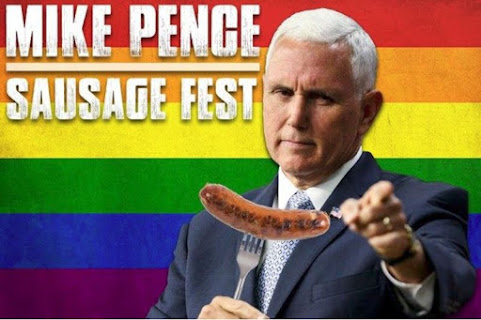 A question of positioning, history and bold statements . . .

VEEP PENCE HAS BLASTED 'NANCY PELOSI'S 49ERS ALL THE WAY TO THE SUPER BOWL AND PROGRESSIVE CHIEFS FANS DON'T WANT HIS SUPPORT!!!

Check the rundown as the big game increasingly turns into a celebration of politics, culture war and election gamesmanship rather than football glory . . .


The Curse Of Mike Pence? Fans Blame VP After Packers Get Trounced By 49ers.

The San Francisco 49ers routed the Green Bay Packers in Sunday's NFC championship game, 37-20, and some say Vice President Mike Pence played a role in the outcome. The Niners will play the Kansas City Chiefs in the Super Bowl on Feb. 2.

In a foolish move the likes of which we've come to expect from the Trump administration, Vice President Mike Pence predicted that the Green Bay Packers would beat "Nancy Pelosi's 49ers" during a rally in Milwaukee last week. Now Packers fans, feeling burned and deflated, are blaming Pence on Twitter for jinxing the team.


Opinion: Trump has made it impossible to 'stick to sports' at the Super Bowl

MIAMI - The only intellectually honest way to respond to those who yell and scream about wanting their sports separate from their politics is to pat them on the head and tell them to bless their heart.

Fox News Channel host Sean Hannity will interview President Trump during the Super Bowl LIV pregame show on FOX, and the highest-rated host on cable news plans to let the commander-in-chief do most of the talking. "My job is to let people hear from the president, not from me," Hannity said.

The Kansas City Chiefs will fly to Miami on Sunday for a week of preparation leading up to Super Bowl LIV. The AFC champions spent this week practicing at home in Kansas City. Following the final practice of the week on Friday, Chiefs DE Frank Clark turned some heads when he stepped to the podium to speak to the media.


Sports Gambling Will Be a Huge Opportunity. Bet on These Stocks.

The Super Bowl is the premier event in U.S. sports. It's also the biggest day of the year for sports gambling. What's different this year is that an increasing share of the wagering on the Feb. 2 game between the San Francisco 49ers and the Kansas City Chiefs will be done legally.

(Reuters) - When the San Francisco 49ers and Kansas City Chiefs face off at the National Football League's Super Bowl LIV in Miami on Sunday, billionaire presidential candidates will battle for attention while big brands bearing positive messages hope to bring balance to the divisive political atmosphere.

The enemy of my enemy is not always my friend.

^^^ Careful, I think we've got a Coronavirus case here who has gone funny in the head.

Come on Mr VP back the Chiefs.

When San Francisco's Nancy Pelosi stated she was proud to be on The Castro Team, VP Pence claimed her remarks sounded like the Bay of Pigs!!!

Sure, I would like the Chiefs to win, but really there are more important things to root for, like hoping Frank Clark doesn't pound the fuckin shit out of his ho if they lose.

Hi chuck you're a racist pig who's brain damaged from too many electrical shocks, have a goodnight also don't sign your posts with the fake URP as everybody knows it is you k thx

It's a bombshell accusation!!! A Game Changer!!!

Really..., you changed my life. Everything is clear now and all I can think about is Russian Collusion.

Get back to watching "The Danish Girl" and eating cold Quiche.

I read somewhere people who suffer repeated electrical shocks are delusional and paranoid, chuck. Is that true? Sure seems to be in your case.

Can we just enjoy the game and not bring politics into it? Oh wait big money is involved, to bad only the rich fuckers can afford to go to the Superbowl, Along with people who maxed out a credit card who will pay the price win or lose, while the every season fan who supports the team no matter what gets to watch it at home, I never go to a game I dont pay stupid prices for parking or tickets, but I love the game, and I dont work in a fire station, so that alone is a win!

California is a dumbocrate state, and Jackson county in Missouri is a dumbocrate county, I doubt Trump will pick a team, but if he does I can gurantee ya that he wont pick the 49's if he picks a side at all, but for me TRUMP 2020 and I hope the Chiefs win.

Trump is boycotting the sons of bitches in the NFL.

Pence flew to Indy to attend a Colts game just so he could leave immediately after a player knelled during the anthem.

I'd prefer they just play golf this Sunday and STFU. Nobody cares what they think.

Yeah, Pence doesn't like Pelosi - but it's really all the other Nancys in SF that has got him so worked up.

No White House invitation for either team.

BTW Chuck, as you see, you have some newbie prick triple posting shit on you just for a reaction.
This dickwad seems to have a facination with electrical ass probing for some reason,
Not the first for you, won't be the last.
Anyway I appreciate as others do, your insights and comments on a variety of subjects. Dalton

I think that's a good call on no White House invitation. I could see just an invitation for Mahomes Kelsey and maybe he'll that would be it.

New England has visited the White House twice, but only because owner Bob Kraft and Trump admire each others sexual perversions.

The Eagles invitation was revoked.

No other team outside NE will get an invite from Trump and most NFL teams would reject it if offered.

Chuck does have some fans.


You progressives really think someone jinxed them. Isn't that just like a far left unhinged moron to really think that. Progressives in Kansas City keep your mouths shut or we will shut it for you!

And yet he does. Weird.

^^What you're really asking is does anyone besides me not care, expecially because some of the players are black.

A very large percentage of the population will be watching the game on television. But, you already know this. You just wanted to feel less alone in your antiquated racist views.

Nobody cares if you care, or not.

And yet they do. Weird

Haha trump openly disrespects pence. Pence had to borrow money for his wife’s dress to the inauguration parties. Trump lives and breathes money. The dynamics in the trump white house must be like mayor of crazy town batshit zany lol -Radish

12:12: Right. He avoids San Francisco because he's afraid he'll run into some of his old tricks in the Castro. His wife need not fear that he'll fool around with another woman. Ask Lindsay Graham.