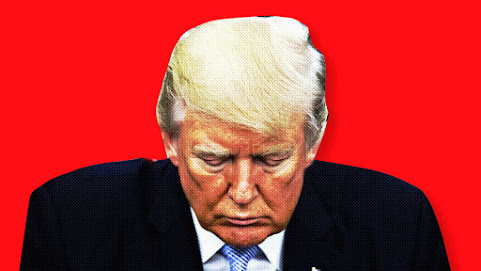 A thoughtful post from a fave in the TKC comments . . . Read it closely, it seems that a few passages might contain a moment of doubt in the promises from the Prez Trump Administration.

Chuck: Tears Of A Clown

"My Drops Of Tears, I'll Turn To Sparks Of Fire". - Henry VIII

Yesterday, Iranians buried Qassem Soleimani, the Iranian Terrorist/General. During the funeral, the cameras focused on two Mullahs, tears, cascading down their cheeks.

Yarden Mariuma, sociologist at Columbia University, writes: "Taqiyya is an Islamic juridical term whose shifting meaning relates to when a Muslim is allowed, under Sharia law, to lie."

State Run TV, is remarkably similar, from China and North Korea, to Iran and increasingly, here in America. The video the world saw, was in no way an accident, it was more gas on the preemptive fire that will be used to excuse the inevitable attack against the West. The tears were theatrics and propaganda that were designed to coalesce the Iranian masses into an anti American false necessity trap. "Revenge" written in English on placards throughout the huge state sponsored crowds in Tehran are a promise of the violence to come. Hortatory exhortations for pay back to the "Great Satan" from psychotic Salifist Satraps in every corner of the Arab world has once again, rendered the Occident tumescent with the possibilities of terror attacks in the foreseeable future. Like the man said, it is coming, "sure as God's vengeance".

We "burned the boats" with the drone attack on Soleimani. While it is true, that Iran is in no way militarily pari passu with American armed forces, that will be no more, than an inadequate post hoc salve to wounds suffered by folks who seem exposed again, by forces beyond their control.


At this point, those same folks in the line of fire, must hear, in their own heads, on some level, their very own, omniscient narrator, grumbling about the repetitive nature of this decades long conflict.

This time, why are we here?

Trump vowed to bring home the troops, at least to a certain extent. Is his volte face due to the tendentious presentation of the now obviously meretricious arguments that insist we must "fight them over there, so we don't have to fight them here"? Does he now, trust the "Intelligence Agencies"?

So called "Intelligence Agencies" that hate Trump, would, in my opinion, be more than willing, as they have been in the past, to make us suffer casualties in and out of the military, in order to acquire and maintain power, bank and sinecure. There is money in war and vacuums to fill.

The essential Mideast Islamic organon supporting those Theocratic governments is the Koran. The Mullahs in the Mideast, are far more easily manipulated by way of the constrictions in the Koran. The reaction to the killing of the #2 Iranian Politician/General is no mystery to anyone.

Perhaps, the resulting chaos, might provide political exposure to a politician that the Intelligence Agencies hate.

excellent post from Chuck. Unlike the libs. Conservatives stick to principals over personality.

we will see how brave white folks are when the body bags start arriving at Dover.

Thoughtful? Hey Macbeth, what did you think of this?

"A tale told by an idiot, full of sound and fury, Signifying nothing."

The CIA has tricked Trump into doing something stupid and Chuck wants the troops to come home.

Hard to argue with Chuck about that. The comment makes it plain. Good work.

^^^ You mean the "Deep State" is back in business?

What is the CIA this week in Trumpelvania, good guys or bad guys?

Is it true that the "Deep State" sabotaged this President way back in the 1960s by injecting him with a biological weapon that causes Bone Spurs?

@8:54 which "Principals" do Conservatives stick to? High School?

And do those "Principals" have any "Principles", because we all know that Conservatives certainly don't?

Well the "Deep State" finally got what they've been pushing for all these years. Will they like what they got? We'll see.

The elephant trashing the kitchen consists of Zionist/NeoCon traitors who have subverted US foreign policy for the benefit of Israel. There will be no peace and prosperity until all NeoCons are purged from positions of power and influence in the US and throughout the entire western world. BTW...the biggest losers in this violation of international law are Israel and the Jewish treason lobby in the US. Consumed by hubris and lacking basic humanity, they may be about to meet their Waterloo.

I took a nap, are we at war with Eurasia or Eastasia right now?
Doubleplusungood either way.

A WRITER MUST KNOW THEIR AUDIENCE

I'm not going to comment on the opinion offered here, but rather the writer's deliberate long-reaching attempt to appear wordy.

Case in point, the example below:

"Trump vowed to bring home the troops, at least to a certain extent. Is his volte face due to the tendentious presentation of the now obviously meretricious arguments that insist we must "fight them over there, so we don't have to fight them here"? Does he now, trust the "Intelligence Agencies"?"

This is a short 3 sentence paragraph. The writer is either purposely exercising his new vocabulary words-of-the-day or he referenced his handy-dandy thesaurus to pump up his verbiage. Result? It doesn't flow correctly.

If you want to effectively make your point (isn't this why writers write?) please err on the side of simplicity. Thank you.

Democrats would whine if Trump Droned Salmonella - when Obama Droned US Citizens, (crickets).

Thanks for all the comments, positive and negative.

10:00 The audience here, just might surprise you. If you are crippled with a lack of erudition then, my articles are a great place for you to matriculate into a high school reading level, with a little effort.

You mean "pari passu" is better than just saying "EQUAL?" Get over yourself.

Or to put it more directly: How's the view up there on the mount, chuck?

I hope the president knows what he’s into, I don’t know.

Obama is like this is Awesome! - "I dunno, didnt know when I did know, and still dont know, I was the first Black President and somehow even though I dont know shit and never did, hope what I did do that I didnt know I did what I did was negro cool", "but that white Hillary pussy was yummy, but I cant say that I ate that fine rotten seafood when I did because I dunno what I know, but I am a Democrate so there is that and even though I am a dumb ex president, I still wont endorse Uncle Cracker Biden, because that fool thinks he is Russian, and his Son has a Russian boyfriend and doesnt want anyone to know that the fag gene runs in the DNA of the family. I dunno shit and suck Bill Clinton dick so its very simple - I just dunno. I am not in the corruption game anymore (but I am) You just dont know it.......yet Brought to you by the OWN network. "ALL NIGGERS and mostley OPRAH"

Most rational Americans thinking goes something like-"uh, gee... I think I know what is going on...its pretty clear all Islam wants us dead...killing any Islamic leader seems like a good idea..but...hmmm, aren't there a shitload in this country...I mean, what about the Mosques down the road and...and..oh jees..Muhammad Ali, and such. How can we identify an enemy that is all around us and how can anybody trust anything anyone says when no one even trusts the Holy Bible anymore ? How can we believe the liars in the press when they tell us our President is a liar ? And how can the President believe anything that an unaccountable entity like the CIA tells him. What about JFK ? Oh Fuck it's all going to Hell in a shitbucket...I'm losing me mind again..."

One could always move there if you support the Hammer and Sickle rainbow flag of a no rights country that kills our people. And you fail to notice your Muhamabdobama funding them 150 billion or your Peanut picker laying down and playing fuck us in the ass. Or you could just look up pre Radical vs the radical one you are supporting.

Our intelligence community is now back in the good graces of the POTUS, according to Pompeo and POTUS himself. Those who were out to get him a short time ago have now provided excellent information so he can distract us with a conflict.

10PM was trying to do you a favor without beating you over the head.

Don't be so full of yourself that you become blinded to matching your writing to the audience. As one of the most prolific writers in the comment section here, you should know that this audience does NOT share your appreciation for inflated contrived vocabulary.

Chuck, I'm an admirer (don't often agree, but do admire), BUT (not as big as your wife's Butt, smartass) to an extent I have to agree with some of the comments. A writer's purpose is communication, and a writer's tools are the words he chooses. I don't think your last name is Bulwer-Lytton, so please give some thought to toning things down a bit.

His prose is tumescent, full of orotund language...

Chuck be like, SMH IDGAF what this audience think.

Just Watch - Trump's War isn't getting the response he wanted, so the next thing he'll do is go on TV saying it wasn't a big deal anyway, and by June he'll be denying that it even happened.