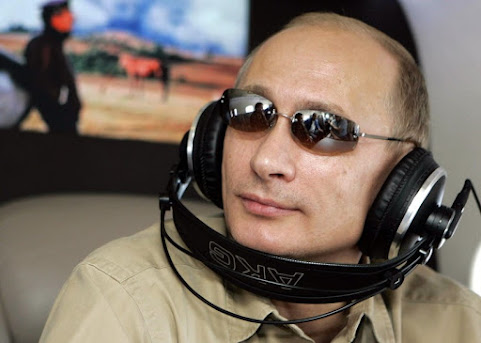 This story is really about the DESPERATION OF KANSAS CITY LEGACY MEDIA and their shameless search for a profit model.

"A Kansas City area radio station can broadcast Russian state-owned media programming, the type that U.S. intelligence called a “propaganda machine,” for six hours a day through a lease agreement struck by a local radio operator.

Background with no paywall from the BBC:

The plebs are crediting newspaper journalism but this dude on Twitter had the story and did all of the heavy lifting before the newspaper published: 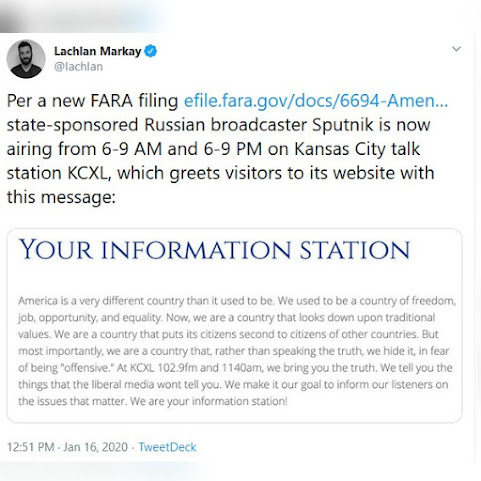 Low wattage, low IQ stations. Perfect for those who believe dinosaurs were on the Ark.

^^^Basically anybody who posts on this blog then.

Breitbart and Drudge must not be reaching large enough audiences these days to keep Putin happy.

1:42, no, they are atheists. And they really
Hate Jews. Ask Jordan, the PRESIDENT OF THE KANSAS CITY ATHEIST COALITION, if there is any connection.

Progressives are liars, first and forever. The media is 95% liberal and everyone knows it. They won't admit it, but, it is true.

^^No. It does however include you. But you knew that though.

^^^You must be a Trump supporter, but I knew that though.

I bet bLIEron wanted this radio station so he can get more fake news stories to spread even more lies. He wouldn’t know the truth if it jumped and bit him in the arse.

I believe we should fear it.

3:10 wants fauxcohantas to be president so that tells you everything you need to know about him, low iq welfare queen right there.

3:10, i believe he is first and foremost anti-democrat. That happens more vehemently when US citizens are extensively subject to gender neutral bathrooms, gender neutral pronouns, and the Bureau of Land Management talking only to white people..

or subject to/expected to subscribe to the nebulous rational for transwomen in women's sports and the new dictionary of terms invented by the LGBTQ Summit in the boggy marsh next to revived McCarthyism.

2:18 - It's hard when you're in the cult to come to the realization that Trump brings piss poor coverage upon himself, but it's true. His tweets, his constant lies, his actions. I've also seen the media report his rare positive stories which generally revolve around fluff...like a kid mowing the WH lawn. C'mon, give us a break.

or when California accuses the president of violating the constitution while they collectively think the popular vote should supersede the electoral college b/c californians are smarter.

What's that old saying? When you can't dispute the facts, slander and discredit the messengers.

So what if some radio station will be broadcasting Russian propaganda. The rest of them mostly broadcast American propaganda. Looking at you, NPR. Be skeptical of all.

Obama would have never allowed this. Looks like Putin called in another favor. That's what happens when you're being blackmailed and owe the Russian mob hundreds of millions of dollars.

That station broadcasts anti Jewish crap by Jeff Rense and many others. Pete Shartel is the owner. Why not call there just to say Hi?

Jews don't control media narratives in Russia. Jews fear and loathe any reality-based assessment of their behavior either as individuals or as a group. This explains their love of hate-speech laws and outright censorship. If I give them a call, it will be to thank them for their factual reporting.

I'll be listening! It's not the Main Stream Media! I'll suck that stuff up like a vacuum and spew it out here! Stay tuned!

5:08, Obama would have been OK with it after the election, when he had greater flexibility.

Rense is a tool.