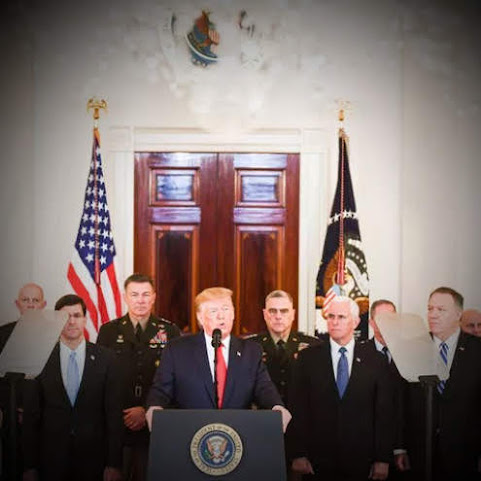 Quick point of order regarding the Kansas City mainstream media game and a dearth of coverage providing street level reaction to global events . . .

SO FAR LOCAL MSM HAS IGNORED PROTESTS THAT SPRANG UP QUICKLY AMID AMERICAN CONFLICT WITH IRAN!!!

Last night and into the morning we shared a good back and forth about the sitch.

Right now we notice dozens more signing up for a protest tomorrow.

In the context of nationwide debate, it's worth mentioning the smaller KCMO protest against the military flexing was immediate on local streets. From the outset of the conflict, Kansas City residents were quick to voice their opposition:

"ORKC members joined many others at Country Club Plaza today to protest the recent actions made by the government in Iran, and demand an end to the endless wars in the middle east." https://www.facebook.com/OurRevolutionKC/posts/1025836507788854

And here's the latest news links blast on the evolving topic . . .


Trump's Iran speech seemed like a victory lap. It actually made things worse.

Donald Trump had the opportunity of his presidency to stand at a White House lectern, look out on the country he leads, and declare to the world his victory over Iran after a deadly standoff. He blew that chance.


Trump: Iran missiles fired at US were paid for with money released by Obama administration

President Trump took direct aim at former President Barack Obama on Wednesday, blaming the last administration for giving Iran money that he claimed was then used by Tehran to pay for missiles that were aimed at U.S. troops in Iraq.

On the morning after Iranian missile attacks on Iraqi bases where U.S. forces are stationed, President Trump delivered a televised address from the White House that offered a condensed version of every national security trope beloved of Republicans and a good chunk of his campaign stump speech.

Senators are hoping for an off-ramp from U.S.-Iran tensions as leaders from both countries struck notes of de-escalation a day after Tehran's missile attacks. In announcing new sanctions Wednesday, Trump also dialed back his rhetoric during remarks from the White House, saying the two countries should "work together" on "shared priorities."

"His instincts still are for not being bogged down in the Middle East in large wars," Paul said. The Kentucky Republican added that "it would be a good time for us to bring our troops home from Iraq" and that it's "an opportune time to reassess whether or not we have any kind of vital security interest in Iraq in particular."

The S&P 500 and the Nasdaq hit record highs after President Donald Trump's comments eased fears of an all-out conflict in the Middle East, as Iran retaliated by firing missiles following the death of an Iranian general last week in a U.S. airstrike.

By Gold futures on Wednesday were off their highs but were hanging around their loftiest levels since 2013 after briefly bursting through at $1,600, following an Iranian retaliatory strike against U.S. miliary bases in Iraq late Tuesday. Iran fired more than a dozen missiles at bases in Iraq where U.S.

Protest tomorrow might get better write-up. So far it has been more fun for local media to look at all of the hollywood stars stick their foot in their mouths.

^^^ How do you figure? He lost most of his support and pushed the country to the brink of war.

It’s not too late to bomb Tehran and kill 200k Iranians, is it? That would let them know they should never forget who runs the show.

Anyone saying trump came out of this worse is a retarded shill. It's the exact same formula that was used with North Korea. Look for sit down meetings between trump and iranian officials in the next six months.

No one wants war, but libs seem to really push it. They're literally protesting nothing because it's not even a possibility at this point and never was unless you bought into MSM like a lap dog

As if anything that Trump did or didn't do would please libs.
Fuck 'em.

If you think Iran is done, you're an idiot.

We killed one of theirs. Honor dictates they kill one of ours.

^^^ The Iranians already killed hundreds if not thousands of ours. How brilliant was it of Obama to give them $150 billion so they could buy more weapons to kill us and get further on their nuclear efforts?

Oh bLIEron, you such a fool

The only things I took from dumb dumbs speech:
I don't know what the fuck it is but Trump snorts something because his incessant nose sniffle, wheezing, whatever you want to call it is over the top.

Trump never misses a chance to make some bullshit up to fire up his base.

Obama owns this guy mentally. His obsession with all things Obama is fucking ridiculous and fucking tired. That is, if you're a normal human being. Which most TKC posters are not.

3:05 - Do you seriously think Iran is going to sit down with Trump? Seriously?

I don't think the left would ever support the U.S. in a conflict with Iran so long as Trump is president. Politics unfortunately doesn't end at the border. They understand that body bags are good for business, but I hope they could resist the temptation to vanity. Imagine you had a child or loved one over there in theater - would your sacrifice the live of your loved one to lessen the chance of a Trump re-election? I hope not, but some on the left are so deluded you have to stop and think sometimes.

They must be on government assistance or on "Moveon" payroll with nothing else to do!

It is way, way past time, for our troops to leave Iraq (Where we destroyed the entire country) and take this opportunity to come home.

We can easily station our troops in Israel, Saudi Arabia and other countries so that we can remain a presence (We need the Saudis to trade oil with dollars.). The conflict with Iran is destructive as was the war with Iraq.

Secure our own borders and quit worrying about securing the borders of countries filled with people who hate us (Some, with good reason.).

On our Southern border, is a country controlled soup to nuts by drugs (Many from our TRUE foe, China.) and cartels that exports death and misery into our nation while our idiot politicians spend money on walls in the Mideast.

Washington DC is the most corrupt city that ever existed. Foreign aid for countries that hate us, is cycled back into political campaigns for the very same politicians who vote for that same foreign aid. Ukraine - corrupt to it's core, is a great example of what is wrong with our foreign policy. The status quo is maintained by those corrupt politicians like the Bidens, who benefit from paybacks. THAT is why politicians on both sides of the aisle, overtly and covertly want Trump gone.

Wars make big money for shitheel fucks on K Street and the 4 richest counties in the United States, where Washington DC exists.

Republican and Democrat politicians, with criminal intent, vote for the continuation of conflicts hot and cold (A military presence is big bucks for the suppliers for the military.) so they can reap the rewards.

The entire cabal, of politicians, the media and the Deep State profit from the death of the kids, our children and our family members who are sent over seas to fight and maintain that same status quo.

THIS is why Washington DC hates Trump.

Trump said he would bring us home - we will see.

You truly are a fucking idiot

And if Obama was still in office these same ones would be praising him. It's just a gathering of Trump haters.

4:26 PM - yes I do. You're the same type of retard who was like "Do you really think North Korea will sit down Trump"

Unlike the closeted faggot before him that perfected it because he was too fucking stupid to speak.

There are far too many resources to rape for the elite to leave,cmon Chuck I figured you would have seen that on Jeffrey Rense.com

5:09 - North Korea has been trying to get a sit down with a US POTUS for YEARS. It fucking validates their regime. All they had to do was get a rube willing to do it. Just stop with your name calling. Try learning something.

4:27 - Do you think the right would support a war? I think the vast majority of Americans (right and left) are over this shit. Iraq was a shit show and God Bless those who served there but I don't think the squeeze was worth the juice. Afghanistan is still a mess and will always be a mess. Americans are just done with conflict in the Middle East. We keep interjecting ourselves into these things and wonder why people try to blow us up.

I understand there's a lot of gray area, the need to control terrorism, etc. but there is no appetite for another war.

I didn't realize how many homo traitors there are in this town. Thanks for the warnings.

America's presence in the Mideast is all about protecting israel..
so don't look for that to end anytime soon

@5:22 We're in the Middle East because if we weren't the Saudi Royal Family (and billions in US Oil Company investments) would be gone within a month, and Israel would be gone in six if we pulled out.

Of course, there is a partial answer - make Israel the 51st US State!
Look at the advantages
1) The Arabs would be hesitant to actually attack US Territory.
2) Federal money to the new State would be cut by at least 90%.
and most important of all...
3) We would cut Israel back to only two Senators!

I’m guessing now that there isn’t going to be a war the msm idiots predicted there won’t be a protest now.

I especially love the protest sign about foreign oil, did someone forget to tell them we are self reliant when it comes to oil! Hahahahaha!

I support bombing Iran, killing as many as possible, and deporting every single Muslim.

^^^ And that clueless winch occasional cortex

Typical Trump situation, didn't hgt the cheers and adulation he expected, so now he's trying to say it was no big deal, and by June will be denying that it ever happened.

Decision Impairment Syndrome at its finest!


I guess the idiot protesters on the street didn't listen to what Trump had to say. They also need to get a clue as to who it was that Trump took out and what he was about to do. You liberals bitch at everything and know nothing about what your bitching about.

Look back, take a breath. This was ugly but it looks like Trump might have done the right thing here.

I listened and couldn't understand him. Pence was standing next to Trump, looking worried he was going to pass out.

I loved Trump owning the libs, but now he's pulling that bullshit on us. 3 years and we're fighting in more places not less. Republican senators today said the White House briefing from Pompao was sophomoric. This is worse than the WMD stuff made up by the Deep State that sunk Bush. I hope Rand Paul will run again, but Trump has lost my vote.