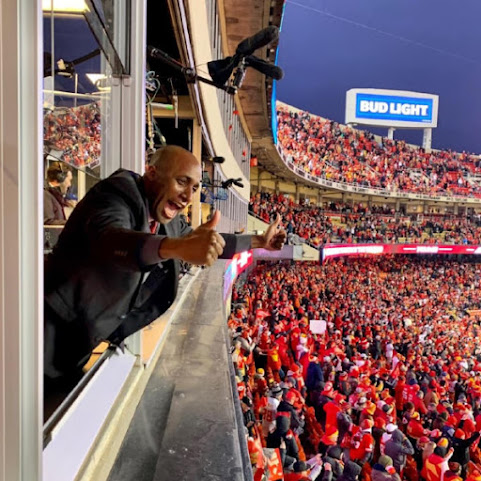 Last night Mayor Q posted an iconic photo that seems to foreshadow good things ahead for this politico, the town and the team.

And so here's a more fan-centered view of the Kansas City footballer post-coital bliss following a historic victory . . .

Of special note to some of the denizens of our blog community, during the late night hours, the home team was front & center via Conservative news . . . 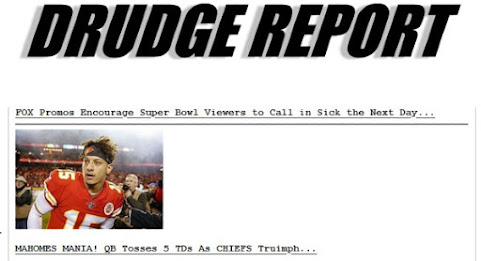 And yes, The Kansas City Chiefs are now FAVORED to win the Super Bowl.

On Sunday, the best quarterback in football reminded everyone of the facts. Throughout the season, the storylines have been about Lamar Jackson and Deshaun Watson. But Patrick Mahomes is the last one standing. From start to finish on Sunday, he was exceptional - and the Chiefs rode him all the way to another AFC Championship game at Arrowhead Stadium.


One of Andy Reid's biggest wins -- but is the best still yet to come?

11:22 PM ET Tim KeownESPN Senior Writer Close Senior Writer for ESPN The Magazine Columnist for ESPN.com Author of five books (3 NYT best-sellers) KANSAS CITY, Mo. -- Andy Reid stood there like he always stands there, looking out at the field like he's seen it all before and is more than willing to fake it if he hasn't.

The Kansas City Chiefs put their fans through an emotional rollercoaster on Sunday as they came back from a 24-0 deficit against the Houston Texans to win 51-31 and advance to the AFC Championship Game. It was one of the wildest games I have ever seen.

Sports Theater For The Plebs

The Kansas City Chiefs had a lot more to celebrate near the end of their 51-31 victory over the Houston Texans on Sunday rather than the beginning of the matchup. Patrick Mahomes threw five touchdown passes, including one of them to tight end Blake Bell in the fourth quarter.


Five things we learned as the Chiefs beat the Texans

In one of the wildest games we've ever seen, the Kansas City Chiefs defeated the Houston Texans 51-31 on Sunday, advancing to the AFC Championship - which will now be played at Arrowhead this Sunday afternoon. Here are five things we learned from the game - and the rest of the NFL's Divisional round games: We always think we know what's going to happen.


Chiefs Open as 6-Point Favorites vs Titans in AFC Championship

By Robert Duff in NFL Football Patrick Mahomes and the Kansas City Chiefs opened as six-point favorites to beat the Tennessee Titans in the AFC Championship Game. Photo by Jordan Kelly/Icon Sportswire.

The Divisional Round games have been played and only four teams remain. Of those four NFL franchises, the Kansas City Chiefs have been named the favorites to win the Super Bowl. According to OddsShark, the Chiefs are the odds-on favorites to hoist the Lombardi Trophy now that teams like the Baltimore Ravens have been eliminated from the picture.

Of course the Chiefs are favored to win the Super Bowl. Everyone with an IQ above 40 and under the age of 65 knew this months ago! They have the single greatest QB in football history. The dynasty is born. Long live the Chiefs!

^^^^Fall flat on their faces you meam

Mistakes by the Texans made it easier for the Chiefs to launch their comeback. The Titans won't make those same mistakes. But lets say the Chiefs go to the Super Bowl then what? I say they will get there asses handed to them. What's worse not going to the Super Bowl or going and get beat down like Mo Rage everytime he tries to open his mouth?

^^@9:40- and everytime you open your mouth, someone shoves a dick into it so there's that. Sure retard, the Titans made mistakes, but what do you think the Chiefs did idiot? Muffed a punt, had a punt blocked, and a miscommunication on defense led to an easy TD. Jesus retard, its one thing to not like football, a lot of people don't, but it's another to talk out of your ass like you just did! Of course it's better to go to the Super Bowl!!! Seriously dude, are you a retard or stupor dave????

Super Bowl for a corrupt and crime infested shit hole in decay.

A Pic of Quinton Mountain Dew Camancho working up the idiocracy.

@9:40 made zero points. That mess of shit was an indecipherable pile of shit. 9:45 rightfully knocked him(you) out. Sorry, not sorry.

I’m so happy for q in his taxpayer paid for suite and police escort and city provided vehicle, shoot, even I would have had a good time if somebody else is paying for it and by the way, if Lucas wants guns off the street let’s start by taking away his armed security and city vehicle, make him drive himself through the same shit we drive through on the daily. Maybe he won’t be so god damn cocky without his protection.

The Mayor looks like he actually thinks all those people are cheering HIM!

wow you killjoys can even ruin a historic unbelievable come from behind playoff win triumph ... is there some Houston local interest blog where sad sacks can lament the fate of the Texans because that's what you all sound like not the winning team fans. just get on the bandwagon there's plenty of room -radish

Q's giving the thumbs up to Wadell and Reeds staff sitting in the stands.

It is a stupid game. And by the way, Mahomes is just not that good.

Wait...What was Corey Booker doing at the Chiefs game?

and yet Mahomes is the greatest QB in the league by a mile and it's not remotely close. Weird.

I’ve worn this T-shirt (gift from @mathieu_era) for each game since the bye week. I don’t plan on changing that today or hopefully the next month. BUT TODAY IS ALL THAT MATTERS!

Getting primed up to drop out of the Presidential race

They were favored by some to be there and win last year and look what happened.

So glad you're in a zoo eating bananas!

@3:26PM-Identify by who please, otherwise you're lying again. Liar.

Will they replace the " Racist " Chop with a PC Rainbow butt drill to fit into the goals of everyone filled with diversity for all answers?

Simple: FUCKEM IF THEY CAN'T TAKE A CHOP!

"seems to foreshadow good things ahead for this politico, the town and the team"


Your obviously as deluded as the rest of us T.

Add a Rainbow skittle party. You all pack your shit and git.