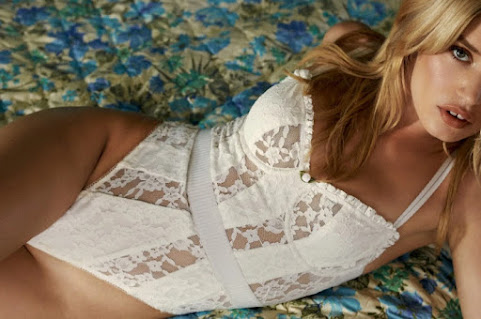 Inspired by the hotness of creative influencer Georgia May Jagger we share a quick peek at pop culture, community news and all manner of interesting items across the nation and around the world.

KANSAS CITY, Mo. -- The Kansas City Live Block in the Power and Light District may feel dormant on Wednesday, but it will be a much different story come Sunday. "We are going to put on a show for everyone," Rachel Waller, director of marketing of Power and Light, said.

KANSAS CITY, MO (KCTV) - The "Tomahawk Chop" has been a part of Chiefs games for decades. But the days leading up to the Super Bowl are pushing the chop onto a national stage and people are talking about it. From the Washington Post to the New York Times, the headlines are creating conversation.

She's got star quality in the genes, as the model daughter of Mick Jagger and Jerry Hall. And Georgia May Jagger wows in her latest glam photoshoot, working with For Love & Lemons and Victoria's Secret. The collaboration sees the 27-year-old model sizzle in a series of lingerie shots with a retro vibe.


'I'm not a virus': French Asians angered by racism

French Asians have taken to social media to complain of a backlash against them in response to the Chinese coronavirus outbreak. China has already seen almost 6,000 cases and 132 deaths, and France has had four cases confirmed. Anti-Asian racism has been reported in the UK and elsewhere, and now French Asians have complained of abuse on public transport and social media.

(Newser) - The long and winding saga of MoviePass has officially come to an end. The subscription service that allowed members to watch a movie a day in theaters filed for Chapter 7 bankruptcy protection Tuesday, CNN reports. NBC News says the move came as "a surprise to no one."

The White House has issued a formal threat to former national security adviser John Bolton to keep him from publishing his book, "The Room Where It Happened: A White House Memoir," sources familiar with the matter tell CNN.

Jordan Strauss/Invision/AP/Andrew Caballero-Reynolds/AFP Sacha Baron Cohen attacked Mark Zuckerberg on Twitter, criticizing the Facebook CEO's work to "destroy democracy." This latest critique was based on a recent Guardian report analyzing a year's worth of the Trump campaign's Facebook ads. Cohen has slammed Zuckerberg before, calling big tech " the greatest propaganda machine in history."

KCUR's Suzanne Hogan brings you tales of the everyday heroes, renegades and visionaries who shaped Kansas City and the region. If these stories aren't told, they're in danger of fading into the past. The first episode drops February 6.

KANSAS CITY, Mo. -- After a hard decision, a local company's leadership has decided to forego tickets to the Super Bowl in order to donate money to help kids in the foster care system. For more than three years, Alenco, Inc. has made a friendly bet with similar home improvement companies across the United States.

In honor of the Kansas City Chiefs playing in the Super Bowl, it's time to upgrade your background on your phone.KMBC 9 has created three different versions with Kansas City's favorite Chiefs players: Patrick Mahomes, Travis Kelce and Tyrann Mathieu.Select your device size below and download your new wallpaper.Share your


Finally, a weather blog not about snow

I promise this blog is NOT about another snowstorm headed our way. It's about a warm-up this weekend. A warm up that will feel great considering our crummy, cloudy, cold weather over the last three weeks. Yes, three weeks of winter gloom. Since January 10th, the average daytime high is 35 degrees.

Mark Zuckerberg is a dictator who bans the truth and allows the lies and bullshit. If you like Trump you have a higher percentage of being place in FB jail than a Bernie lover. If you say anything derogatory about a democrate it's deleted and you go to their timeout jail. Bryon would be considered a saint with his racist NAZI Trump the dictator rants at FB.

I can see why you would have trouble getting them in the right order.

if sleazeball S B Cohen and the ADL are against him, Zuck must be doing something right.

Riiiight that's why Dump spent 20 million, his ads & shares & comments are all deleted. You don't have an analysis to contradict the guardian so as usual for Dumpists you just spew the opposite of reality.

So watch and learn I won't show you twice
Head to toe, ooh baby, rub me right
You please me, then I'll do you nice
Lips and tongue, but please don't bite!!!

8:22 are you high? Asking for the police

No I did that on purpose Byron to see if you can read or not being as you claim to be blind. Busted you in another lie asshole.

Wow. Get back on your meds.