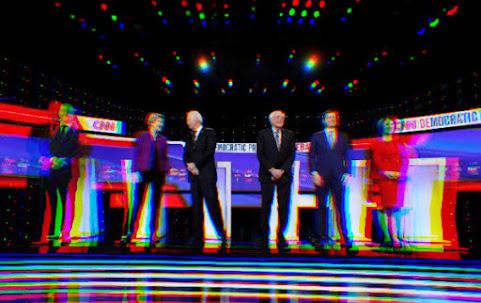 The theme for today turns out to be a worsening war betwixt progressives vs. establishment Democratic Party interests. The rift is apparent not only across the nation but also in Kansas City.

Locally, this town confronts the same issues that plague Dems:

- Progressives are the loudest and most active voices in local politics. They move social media and street level organizing much more effectively than their counterparts.

- Unions and corporate special interests have all the money and they're not backing radical progressives. A certain level of professionalism is required to garner support from the party's top levels. OLDER, more socially conservative establishment leaders aren't giving away big bucks away to the street level protesting political underclass.

- The African-American voting bloc is NOT on board with progressive, radical LGBT and immigration initiatives and, rightfully, demand more representation among the party's leadership.

Meanwhile, Prez Trump has intimidated the establishment GOP into submission and essentially he's their biggest and best star who has far more public support than any other right-wing American leader or voting bloc.

And so, here's a roundup of the debate links we're checking tonight . . .


Dems Are All White


The January Democratic debate, like the slate of Oscar nominees, will be very, very white

January's debate stage, much like this year's slate of Oscar nominees, is going to be very, very white. In fact, it will be the first debate without a single person of color onstage.


Can a Woman Win the Election?

How We Lost the Right to Move Freely Is This the Worst Sports Tweet Ever? Identity-Based Coalitions Aren't Lining Up for Democrats in 2020 Trump Says He "Saved" Obamacare's Protections for Preexisting Conditions Welcome to Day 4,742 of "Can a woman win the election," coming to you daily, it feels like, since Hillary Clinton announced her first candidacy on Jan.

DES MOINES, Iowa -- Three Democratic presidential primary candidates who didn't qualify for Tuesday's nomination debate will still get their messages out even though they won't be on stage at the primetime showdown. Former New York City Mayor Mike Bloomberg is running a commercial on national cable TV on CNN, the network that's televising the debate, as well as on MSNBC.


In pictures: The Democratic debate in Iowa

It's the final Democratic debate before the Iowa caucuses next month, and the leading candidates are getting a chance to speak directly to those who will be casting a vote.

Democratic presidential candidate Andrew Yang gets a big endorsement from Dave Chappelle. The legendary comedian will stump for Yang with performances in South Carolina. No word on whether Chappelle has a Yang impersonation but in this clip, you'll see Chappelle is no stranger to political impersonations.

President Trump is holding a campaign rally on Tuesday night in Milwaukee, Wisconsin, as the Democratic presidential candidates take the stage for their seventh primary debate and the night before House Speaker Nancy Pelosi officially transmits articles of impeachment to the Senate. Trump is expected to take the stage around 8:00 pm.


Bernie Sanders Denies Telling Warren a Woman Couldn't Win, and She Chooses to Move On

The final Democratic presidential debate before primary voting gets underway began with a sharp focus on wars in the Middle East and trade, but wasn't long before a dispute between progressive frontrunners brough an uncomfortable debate back to the fore: Can a woman run for president and win? Sen.

Old man Biden is coming out ahead here. He's the only one who has a support outside of his twitter feed.

So, you're just going to hand the election over to President Trump? Thanks!

@8:57 is completely incorrect. Look at what President Trump is doing. If he's going after Bernie there is definitely a reason for that. He knows where the real threat is coming from. Now is the time for Democrats to offer voters a real choice. Biden and Warren just just as corporate as the Republicans and Trump. Senator Sanders is the only REAL alternative and his policies are a last chance for working Americans to vote their interests instead of just hoping for hand outs and hand me downs.

Impeachment FAILED. That is the headline for tonight. None of these candidates have a chance.

What's the "Debate Can?" A trophy or something?

Democrat Can . . . Toilet trophy for second place and bitching about the popular vote for another 4 years!

Bernie won and he'll win in November as well.

The DNC assures their members that they can have any flavor they want...as long as it's VANILLA!!!

^^^ Sorry, Americans aren't going to vote for socialism. They've seen the destruction it has brought to other countries and don't want to have that happen here. Neither Warren not Sanders have a real shot.

^^^ Why are conservatives so obsessed with homosexuality. Seems like they think about it constantly. Seems like a closet case guilt. Btw, Warren is the only candidate who is still going up in the polls. The rest are just trying to hold their base together.

blue-eyed blonde WASP Liz Warren got her $400,000 /yr Harvard gig by claiming to be an American Indian..

Yang is the only candidate who makes sense.

If the party really wanted to change, they would put him front and center.

Trump wins re-election hands down for sure now, the dims don’t stand a chance

I want to be on record here just so you shit heels never forget it:

Trump loses the popular vote. The fact is that any of these candidates could defeat him. He's a paper tiger and his campaign hasn't had a significant win since 2018. They were trampled in 2018 and this time around it's looking worse for them.

I know that the ReTHUGlicans always say this about Kobach but I am a Democrat and tonight there wasn't much that I saw that would convince voters in Red State. Of course California will vote for whoever the Democratic Party puts forward but when we're talking battleground states, all of these candidates will make it very tough to get people to the polls and turnout is key, it's how Trump won to begin with.

That's not true. Her heritage, or lack thereof, had nothing to do with her hiring. Her status as a Native American was highlighted by Harvard to show how wonderful they are, but she was not hired because of it.

^^^^^And yet Warren (and her mother's family) thought she was part Native American while Trump knew he was not Swedish. Weird.

Why would anyone bother watching...they are all open borders globalists...open borders and mass immigration lowers your wages and raises your rent, sucks your taxes away from other needed expenses, and dilutes your vote.

@12:34; Where did you find your 'facts' or did you make that up?
Inquiring minds want to know.

This ain't your grandfathers Democratic party. It his communists party. So much loosing, are they all old examples of Common Core ? MAGA LANDSLIDE INCOMING

Video from inside Bernies campaign:

6:08: And yet my grandfather could speak and write in seven languages, and you have not yet mastered English. Weird.

6:57 Thinks everything is weird. THAT is weird.

Well, no. He's a kook with no real plan.

Sure, sure. Papaw and cheekbones! I love how you all continue to defend the worst lie in Fauxcahontas' quiver. Please keep doing so, because it's a laugh riot every time.

Did Trump ever claim an underprivileged minority status in order to exploit that status? Nope.

Fred Trump was a war profiteer. The apple didn't fall far from the tree.