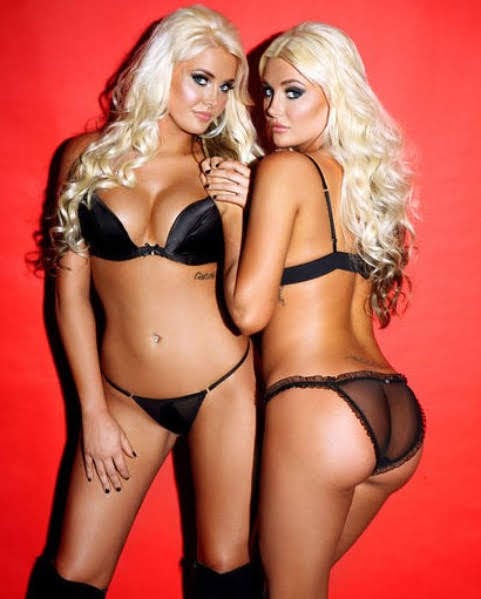 We play just a bit of ketchup with tribute to the career of The Shannon Twins. They were discovered by Hef and continue their career in the hardcore industry with social media love as well.

Also, there's just a bit of community news and political stuff in this news blast . . .

KANSAS CITY, Mo. - A new women's football league will expand to Kansas City with a debut this spring. The Kansas City Force, part of the Extreme Football League or "X League," will play its inaugural season home games against the Omaha Red Devils on May 8 and the Los Angeles Black Storm on June 27 at Silverstein Eye Centers Arena in Independence.

Shots fired. A new ranking by Inc. magazine claims startup powerhouse Austin, Texas, is "leading the nation in job creation and high-growth company density - and delish BBQ." Kansas City? Not even on the list. Inc.'s Surge Cities index - detailing what founders can learn from the 50 Best U.S.

The parking garage at the Park Reserve Condos remains closed three months after the Kansas City Fire Department shut it down for being unsafe.

The reason Hugh Hefner kicked his former twin lovers Karissa and Kristina Shannon out of the Playboy Mansion was their frolics with younger men, The Sun reported Wednesday. The 84-year-old "Playboy" founder flipped out in January after the blonde girls, 20, flouted his no-boyfriends house rule by inviting partners back for sessions under the sheets.


Tesla Is the Most Valuable Car Company In America Ever

Tesla stock is up again in midday trading Tuesday, by almost $7, or 1.5%. The S&P 500, by contrast, is down about 0.3%. It marks another all-time high for the electric vehicle pioneer. Tesla (ticker: TSLA) shares are up a whopping 93% over the past three months and have soared almost 10% year to date, far better than the 0.4% gain of the Dow Jones Industrial Average.

Senate Republican leaders are preparing to move forward on a set of impeachment trial rules without Democratic support. Senate Majority Leader Mitch McConnell has locked down sufficient backing in his 53-member caucus to pass a blueprint for the trial that leaves the question of seeking witnesses and documents until after opening arguments are made, according to multiple senators.


Top Facebook exec: Yes, we got Trump elected and it may happen again

A Facebook executive who backed Hillary Clinton's 2016 election campaign told colleagues in an internal memo last month that the platform could ultimately be responsible for President Trump's reelection.

KANSAS CITY, Mo. - Since moving into a new multi-million facility, KC Pet Project has seen an increase in the number of adoptions. Dogs and cats were welcomed to their new home on January 1st. Since then, they have had 155 animals adopted.


The countdown to Royals Fan Fest 2020 is on

KANSAS CITY, Mo. -- The Kansas City Royals and their fans are looking forward to seeing each other again for the 2019 Royals FanFest presented by Blue Cross and Blue Shield of Kansas City on Friday, Jan. 24 and Saturday, Jan. 25 at Kansas City Convention Center's Bartle Hall. Friday, Jan.


Wednesday will be windy

EVENING. TEMPERATURES WILL DROP SLOWLY THROUGH THE 40'S AND RAPIDLY COOLED DOWN TO THE 20'S BY TOMORROW MORNING. WE WILL BE AT 39 BY THE TIME THE DEVILS ARE ON. LOW TEMPERATURE TOMORROW WITH AN EAST WIND FLOW AT FIVE OR 10 MILES PER HOUR. 29 DEGREES. 27 AND THE NORTHLAND.

Nastiness front to back in KC?

^^^ Actually, "Lingerie Baseball" would be the best chance for survival for the Royals, but "Lingerie Football" would make sure no KC fans cared whether the Chiefs made the playoffs or not!

When asked if the Shannon Twins were identical, Hefner stated, "No, Karissa is the girl next door, while Kristina prefers the back door!!!"