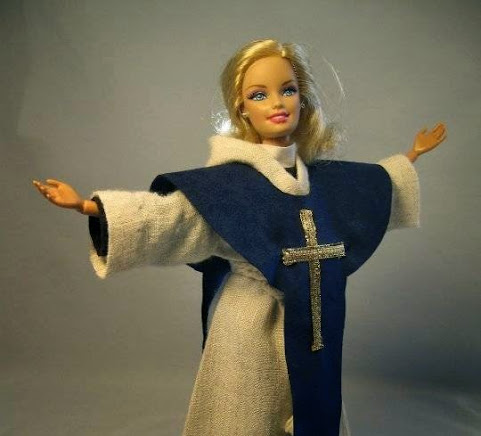 Better than pretending to pay attention in Church . . . Here's news and discourse related to high ranking Kansas City metro Catholics for the faithful among our blog community . . .

Catholic Standard carries bold proclamation: Pope Francis “has our backs” in the pro-life cause, Archbishop Joseph F. Naumann of Kansas City, Kansas, said to applause in his Jan. 23 homily at the opening Mass of the National Vigil for Life.

Though he repeatedly missed the mark with his offering, Barbie forgave Ken for his shortcomings!!!

Today's consequences of the "Biggest Lie Ever Told".

There is no god.

If you believe a virgin gave birth to the "Son of God", then you are mentally ill (& it doesn't matter how many people share your separation from reality.)

Even if you're a Protestant.

Byron is a Hater, like most atheists. But I agree that the statement that there is no god is in fact The Biggest Lie Ever Told.

I dont care what others say, I am amused to have Byron in Raytown...just check out the Serenity Coffee shop. Thongs have picked up around here. But the rest of you can keep pretending he is still in Va. If it makes you feel better.

There is no Byron.

Byron maybe Darwin was right and the strong should not have to provide for the sick and demented so according to you we should let them die.

The catholic church was formed when pagan religions were allowed by emperor Contantine in 616 ad. Just to hold together his empire. It was a political move. Pagans tried to merge with the Christian church, bringing their traditions of smoke, indulgences, purgatory, candles, robes, worship of mary, idols in church, hats, chants of prayers, relics buried under each alter, beads, and actual conversion of communion bread into christ's body. So if communion in churches takes place an estimate 150,000 times a day - the priests have called down Christ, crucified him 150,000 times each day and converted the bread into his body. If that were true the health department would be having a fit. Its all pagan stuff that God hates. Plus the crooked sex abuse priests can actually raise their hands, call down Christ and make his body appear? I dont think so! If Christ came down he would destroy the rapist Priest. Christ is not in the Catholic church.

If there is no God, then why are people scared to die? If death is a natural thing, then why dont people kill themselves right now to get the next step in their existence. If you ever looked at DNA strands, you can see they were made by a being more intelligent that humans, So you have no excuse. Google DNA. read about it.

For some, death is a big promotion. For others, its the ultimate demotion. Aint no beer, sex, pretty girls, drugs or rock & roll in hell. Dont end up there.

Byron is proof there is no God.

Except he isn't. Weird.

Byron is phony. There is no Byron, and the jokes on you.

Looks like the Kansas City Atheist Coalition came in to shit all over everything.

Only a uneducated blithering idiot like fuckhouser would believe there is no supreme force. The universe is still being created as we speak.Who do you think is doing that fuckhouser you marxist traitor hero obama or maybe your thieving Marxist traitorous queen hillary? It never ceases to amaze me how you leftist idiots truly believe your intelligent and all that is around you is stupidity when the opposite is true you leftist democrat traitors are the idiots and sooner than later you scumbags along with your criminal media will cease to exist

People don't want to believe in God because then they would have to obey and respect God.

Catholics who can't even work their way to a promotion at work, or work their way to become the company CEO - they foolishly think they can work their way to heaven. Bu church attendence, repeating prayers, money to church, confession. All of which is works and gets you not even to purgatory. You cant get to heaven by works and "living a good life". Only by faith and trust in Jesus. Dont believe me? What till the day after you die.

I know you don't use rigorous logic too analyze your own favorite miracles and bigotries.

God has done quite a bit providing the context of free will, people shit all over it, the dexterity of which is displayed throughout the metro, the region, and the country.

Someone is going to bring up why God allows disabled children. Answer: Because it teaches us humility (it could have been us), kindness, caring, makes us focus part of our day on being unselfish and it draws kind people to us, and the selfish superficial people leave us alone - they dont want anything to do with someone in a wheelchair. Thats why I am blessed God gave me a disabled child!

Sadly, the Catholic church looks like the narrow path to heaven. But it isn't. There is no purgatory, limbo, need for relics, need of indulgences (still sold in NYC) or need for confession to a priest in the BIBLE. So its all unbiblical. Which means its a false religion. We all know the Devil is 99% occupied with starting and building false religions. The devil doesn't sit on your should to tempt you into doing bad stuff, your fallen sin nature does that without the devil's involvement. The Catholic church is portal to eternal judgement. Its a phony as a cult made up in the last 24 hours.