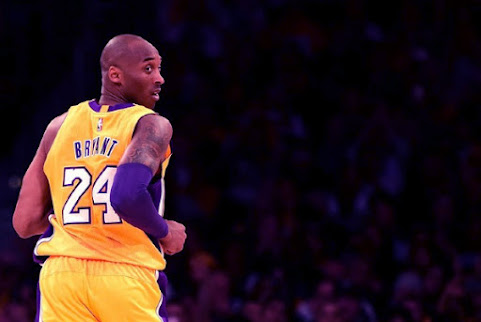 Sports news and mainstream coverage of a b-ball star dominate local headlines and so our blog community shares an ALTERNATIVE perspective on a tragic death.

Here's the smartest comment sent our way so far . . .

"I believe in forgiveness and Kobe Bryant admitted he made a mistake. But rape is rape. All the people honoring him today seem to forget about his victim. I'm sure if you linked to an article like this you'd get hateful comments about not respecting a superstar basketball player. And yes, he leaves a grieving widow and three young kids. But he also leaves a rape victim that has to live with what he did to her for the rest of her life."

It's important to note that "prosecutors dropped the charges — which could have sent Bryant to prison for life — in 2004 after the accuser decided against testifying. A civil case she brought against him was settled out of court in 2005 for an undisclosed amount. Part of the suit involved a public apology from Bryant.

“Although I truly believe this encounter between us was consensual, I recognize now that she did not and does not view this incident the same way I did,” his statement said.

Similarly, one of the best and brightest among our blog community offers insight on the local impact . . .

"Does this take the pressure off the Chiefs now that they're out of the spotlight and the sports world is focused elsewhere for most of the week??"

"Kobe might have passed through town once or twice but this is a NON-STORY for people viewers and readers who want Kansas City news. Shame on MSM for giving it so much time when there are more important things happening locally right now.

Accordingly, we take a quick look at Kobe news in order to keep moving forward with our local blogging:

KANSAS CITY, Mo.-- Everyone is in shock over the news of former NBA Los Angeles Lakers star Kobe Bryant's passing. Just Saturday, the Mamba was congratulating LeBron James on Twitter for surpassing him on the all-time scoring list. Many fans still can't believe he's gone.

Kobe Bryant was an All-Star on the court, but his legacy off the hardwood was more complex. The legendary NBA player made headlines in July 2003 when he was arrested on felony sexual assault charges in Colorado.

Local and federal authorities are investigating the Southern California helicopter crash that claimed the lives of nine people, including 41-year-old NBA legend Kobe Bryant.The helicopter crashed into a hillside in Calabasas, California, Sunday morning, killing everyone on board."It's a logistical nightmare in a sense because the crash site itself is

An MSNBC anchor apologized on Sunday after some believed she made a racial slur during a live broadcast shortly after the death of Kobe Bryant. Host Alison Morris appeared to drop the N-word while trying to say the name of Bryant's team, The Lakers, during an announcement about the fatal helicopter crash.

To celebrate the life of Kobe Bryant means celebrating both a beloved, unique athlete and a fallible human being-the entire story. I'm staring at a computer screen, watching the tweets about Kobe Bryant in a state of abject shock and horror.


KANSAS CITY, Mo. - Purple and gold shined on The Silverstein Eye Centers Arena Sunday evening in honor of Kobe Bryant, who died earlier in the day Word of the horrific crash on a California hillside traveled fast. "There were no survivors.

Disagree with the last comment. This is a story because you have so many Chiefs and Royals players really shaken up over it. The whole sports world was impacted. It's like saying impeachment isn't a story because it isn't happening here. Some things have a bigger impact overall.

Pissed the local news doesn't even mention his sex assault, at least some of the national news sites are reminding their readers of his real legacy.

The more ya fly the more likely ya die. This dude loved to fly.

And yet the charges were dropped and the alleged victim settled for money, so it's a case of "he said, she said." As our fearless leader said, "When you're a celebrity, you can grab 'em by the pussy."

His Helicopter was previously owned by the State of Illinois.

After Kobe bought it, he put the famous NIKE Slave Labor "Swoosh" on it.

You can make hundreds of thousands of points and be a great basketball player..., but rape one woman...

7:44 Yeah, that's why his wife got a 3 million dollar ring, because she believed he was innocent.

Your only invincible for a short time

7:44, Willie Brown and Kamala Harris proved that to be true.

Let's hope that all of the posters here will have the worst mistakes of their lives dredged up and made part of their obituaries. And soon.

The flight map, tower and pilot conversations are on you tube, a lot of people think the pilot was flying VFR (visual flight rules) in heavy fog, they claim he should have been flying IFR instead, I think it’s instrument flight rules? Anyway he ran the thing into the ground is what they think happened

8:29 How many dudes do you hang around with who have forcibly raped women?

See, here's the thing, raping girls is not ok and when you get nailed for it, people tend to remember.

AVSAviation is the you tube channel

^^A bunch of white man don't respect the black man?

Amazing that none of you seem to have a problem with an accused rapist in the White House. Oh, that's right: He's a White Republican. He was only accused by TWENTY women, so it's okay.

You can't wait to vote for him again.

^^^^^You asshole POTUS was never charged with rape you fucking loser.

Kobe was charged with rape. Kobe had money and bought his way out of the raoe with the help of the NBA. Look it was all business folks sipple as that. the NBA didn't want to see their star covicted of rape so cash settlement was made instead.

Rape is Rape just like Byron Funkhousr has been raping us all for years.

Byron just has to make anything and everything about Trump.

and yet he has been accused of rape multiple times though. Weird.

Bill Clinton? Yes, credibly, over and over. Wonder why they keep him out of public view.

^^Sorry gramps, nobody's talking Clinton. Go back to Matlock, looks like your dementia is returning. We're talking the rapist Donald Trump. Come back when the fog clears...if it ever does.

9:46 what about that little girl you raped?

I saw you do it and you know you raped her.

^^Let me know when multiple pictures of me appear with her after I've denied knowing her come up. Then we'll talk.

Which was the bigger story , Kobe Bryant's death or MSNBC's Allison Morris referring to his team as the "Los Angeles Niggers" ? Sound-off TKC readers !

10:53 makes no difference, you raped her end of story.

I have heard the tape the N word isn't what she said you clearly hear her use of the letter K. She was talking way to fast as she was probably being rushed by the producer. She got tongue tied and nothing else.

^^Only the shut-in, geriatric, racist, crowd on here would care about that. The rest of us with lives already moved on from that. By all means though, you retarded fucksticks continue to argue amongst yourselves about it.

Come on people stop trying to stir the pot she said” Nakers” go listen and stop trying cause drama! Go listen for yourself!

I think I know what would make all of us, including Byron happy.

Byron could get a BLACK gun and blow his one brain cell out. His white ass would be dead and just like dying on the cross got us all off of the hook, this too, would make the world a better place. I know that we would all live a far happier life and finally, finally, finally Byron's life would at least have some meaning.

Black people will still hate you because you are, or, were white Byron, but the symbolism and "walking the walk" would ameliorate all of our white sins and the entire world could start living in harmony.

Chimpy! You can't keep up with us humans! Your teeny brain can't do it. Stick to bananas and flinging poo! Lol

But Chimpy! Being in a zoo like you means you're shut in! And you should be. Now dance for your bananas dumb monkey! Lol

I'm legit surprised at the lines in the sand drawn at the accused rape. I'm not a fan of Kobe, don't watch the NBA, just don't care one way or another. However, I do remember the rape accusation. Everything I read and heard smacked of gold-digging ho out for money. I don't for a second believe Kobe raped that gal. Also, I cannot stand the king of fake news MSNBC, but come on righties, the news reader clearly fumbled her words, she's likely never even pronounced the name of either team aloud. Probably didn't even know what professional basketball was until the words came across the teleprompter and some little snippet in the (shallow) depth of her mind connected Knicks and Lakers into one. It's quite clear if you have no agenda.

The girl he raped got 2.5 million his helicopter cost 14 million.

She said Ni__ers. There is plainly a G sound in there. Duh

To quote Ilhan Omar "some people did something", this case died a helicopter crash.

How tone, perception and degree moral outrage can change, how one speaker's comment is colored compared another, one the deceased raised higher others.

Now a small faction wants to turn said into the apocalypse - change the NBA logo from a man and his ball Jerry West to another and his ball Kobe Bryant (ridiculous, not only because Bryant couldn't carry West's shoes the court.)

No, one rape is one too many - greater humanity, tradition and common sense is a bridge too far. One more denigration via deification 'just another guy' who dribbled balls?

What does Kobe have to do with trump?? Why would someone bring that up. Weird. Anyway th comment about flying a lot. Yes -a rich guy way to die young is a lot of small and private aviation. Thx Radish

Why do you have to be charged with rape for it to be rape? There are plenty of rapist walking around Kansas City never been charged. Go to any Catholic Church your town USA. WTF are you talking about?


I listened to the MSDNC clip yesterday -- she said the N word..laughed my ass off.

This is like the Derrick Thomas death all over again. Because he was a football star everyone forgave him for driving way too fast and recklessly on a highway that night according to witnesses who said he nearly hit their cars. Then he flipped his SUV and killed his passenger and he died a few days later. His estate sued GM for having a weak roof that couldn't sustain the rollover. He killed an innocent man in his car! And he left seven kids from four or five women that he never married but hopefully at least the kids got his money. Kansas City acts like he's a hero because he was a football star but he killed his passenger and nearly killed others on the highway that bad weather day when he was driving too fast and aggressively.

In fairness to Kobe, the first 6” was consensual.