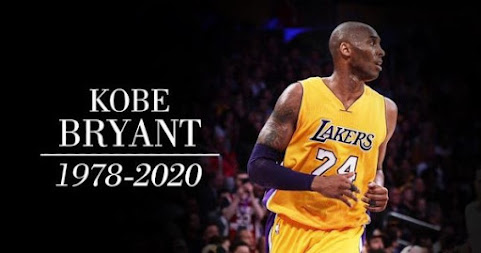 Just as our blog community suspected, local news didn't bother to mention the most interesting or controversial aspects of the Kobe Bryant story. Social media was abuse with chatter of everything from #MeToo considerations to N-word accusations from none other than former cowtown dead-tree media columnist Big Sexy and a cabal off crusaders.

Here are some of the more interesting local links along with select news items suggested by our readers . . . Checkit:

While speaking about Kobe Bryant and his daughter Gianna's sudden and shocking deaths in a helicopter crash on Sunday, MSNBC reporter Alison Morris stumbled over her words - and had many concerned she'd dropped a racial epithet when referring to the Los Angeles Lakers.


Why Did the Washington Post Suspend a Reporter After She Tweeted About Kobe Bryant's Rape Allegation?

The loss of Kobe Bryant, 41, as well as that of eight other people in a helicopter crash on Sunday night, is horrifying beyond any conceivable definition of the word.

KANSAS CITY, MO (KCTV) - Kansas City native Clay Johnson played two season for the Lakers in the early 1980s, winning a championship with the team in 1982.

As the world mourns the loss of NBA superstar Kobe Bryant, friends, fans, and colleagues have been sharing stories of the basketball behemoth. Local actress and choreographer Gaby Lucas had an incredibly chance encounter with Bryant more than 20 years ago in-of all places-Paris, France. We caught up with Lucas to tell us about the...

The 2020 Grammys Felt Like a Party Thrown by Your Dad I Am Furious That a Reporter Told People About the Terrifying Ordeal I Put Her Through After She Asked Me Questions I Didn't Appreciate Gigi Bryant Was a Great Basketball Player Billie Eilish Cleaned Up at the 2020 Grammy Awards In 2016, Lindsay Gibbs wrote a story for ThinkProgress titled " The Legacy of the Kobe Bryant Rape Case."

The KC outpouring of sympathy was too great for any local news outlet to risk it. There has been some great progress for MeToo but very little of it when it applies to KC reporting.

^^^ Maybe taking the time to report on some rape survivors would have been a good angle.

KC is a sports fans town, it's too be expected that locals are far more willing to overlook the negative stories and focus on the charity work the guy did -- Not insignificant, he paid millions upon millions to clean up his image and not just to his wife.

Eagle County Sheriff investigators first confronted Bryant with the sexual assault accusation on July 2.[1] During the July 2003 interview with investigators, Bryant initially told investigators that he did not have sexual intercourse with his accuser, a 19-year-old woman who worked at the hotel where Bryant was staying. When the officers told Bryant that she had taken an exam that yielded physical evidence, such as semen, Bryant admitted to having sexual intercourse with her, but stated that the sex was consensual.[2] When asked about bruises on the accuser's neck, Bryant admitted to "strangling" her during the encounter, stating that he held her "from the back" "around her neck", that strangling during sex was his "thing" and that he had a pattern of strangling a different sex partner (not his wife) during their recurring sexual encounters. When asked how hard he was holding onto her neck, Bryant stated, "My hands are strong. I don't know." Bryant stated that he assumed consent for sex because of the accuser's body language such as her kissing him, putting her hand on his penis, and bending over, but that he did not explicitly ask for her consent during the encounter. Bryant later said that he believed his accuser was capable of saying no because during the encounter he asked her if he could "cum on her face", and she said no.[3][4]

The evidence recovered by police included the T-shirt that Bryant wore the night of the incident, which had three small stains of the accuser's blood on it. The smudge was verified to be the accuser's blood by DNA testing and probably was not menstrual blood because the accuser said she had her period two weeks earlier. It was revealed that Bryant leaned the woman over a chair to have sex with her, which allegedly caused the bleeding. This was the sex act in question, as the accuser claims she told Bryant to stop, but he would not, and Bryant claims he stopped after asking if he could ejaculate on her face.[13][14]

From the accuser's story -

“Last night I was at work and I was sexually assaulted.” So begins the accuser’s version of the events that took place the night of June 30, 2003, according to the police transcript of an interview taken with her the following day by Det. Winters and Deputy Rich of the Eagle County Sheriff’s Office in Eagle, Colorado.

The accuser, who is white, said she arrived late to work at the Lodge & Spa at Cordillera, a resort in Edwards, Colorado—between Eagle and Vail—at around 2 p.m. on June 30. At around 4 p.m., she said she received a call from a travel agent checking in on a reservation for “Javier Rodriguez,” and the agent “divulged the information to me that it was actually Mr. Bryant.

Me, I am sick of all the "Victims". What the heck does she expect?

I am sure that the manager where she works, no doubt told her, that "Every now and then, you are probably gonna get bent over a chair and take some chocolate pipe from an NBA player.

I am an electrician and I am constantly cutting myself and occasionally shocking the shit out of myself. It comes with the territory!!!!!

She should have just sucked it up and got back to work like I do.

^^^^^^^^^ Be fair chuck. Remember that they found multiple evidence of multiple sex partners of the accuser.

The defense also claimed and offered their evidence that the accuser also had a history of emotional instability, had made several false claims of sexual assault to psychiatrists and police, and had on several occasions reacted to romantic rejection with outbursts of violent rage. She was acquitted of her alleged attacks.

8:23 Plus, if you are lucky enough to have a famous NBA player show up and forcibly pour the coals to you and he is a liberal with close ties to the Obama's, then hell, she probably should have paid him!!!


Of course Alison Morris is going to get by with saying NAKERS because she's a liberal. Let a conservative say that and we would be crucified. So don't worry it will be forgotten about by tomorrow you can count on it.

Remember that one time he ran down the court and sank that basket!

Wow! I will never forget that.

That was some basket. No wonder everyone is stopping and paying their respects. Who could forget that basket he made?

You guys remember, don't you?

It was that one basket.

^^^ well..they are nearly all black..so maybe they should start calling themselves that ..no worse than "Redskins"

8:01 KC IS definatley not a city government who uses tax money to fill potholes!!! Everytime I hit one and blow a tire and need a re-alignment, I think of pristine fire trucks driven by over paid hose draggers cruising the Plaza and Westport on the Weekends for pussy who provide unsatisfactory service to its residents that pay their wages. The Kobe Bryant tragedy happens to families everyday everywhere. He (Kobe) is a celebritry, which is why we are hearing about it. I dont follow negro basketball or white cracker hockey, but I do feel for his wife and family who lost a husband, daughter, grand daughter, and a fat paycheck. At the end of the day the crash ended the money train for all that put this on the news.

Anyone accused of any crime is assumed guilty until proven innocent, regardless of what the law says. If this weren't true, there would be no word such as alibi.

We're assholes if we don't believe the women, & yet, some women lie about this, ruining some innocent man's life. There is no justice for these men.

We need to find a better way to resolve these puzzles.

"I am an electrician and I am constantly cutting myself and occasionally shocking the shit out of myself." - chuck

Well that explains a lot. "Researchers have shown that an electric shock ranging from 120 to 52,000 volts can cause neurologic and neuropsychological symptoms in humans. Following an electrical injury, some patients may show various emotional and behavioral aftereffects like delusions and paranoia."

So there you have it. Chuck is nuts because of repeated brain damage! I knew there was some sort of explanation.

My uncle was an electrician. His last words were, "don't plug that in yet".

BYRON IS NOT BLIND. BYRON STEALS FROM US ALL. FACT.

How would you know? Of course, you would not.

No one is perfect and it's obvious this person had serious flaws. It is not out of line to discuss them as part of his life over all. Maybe if he had more time they would not have seemed so bad and dominated the discussion of his life overall.

Ha! Chuck is also a shitty electrician??? Figures. He ran Brandsmart into the ground. Dumbass. Explains a lot really.

Sorry his daughter was killed in the crash.

Kobe literally admitted to raping her. Part of the settlement to not pursue criminal charges was that he publicly admit and apologize for raping her, which he did.

^^and yet that was a decade ago. You weren't there. You have zero idea what happened.