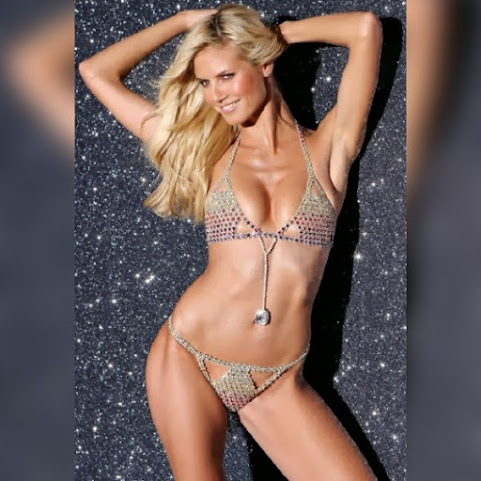 Relevant fact related to the industry and #TBT: Classic hottie Heidi Klum has worn the iconic Victoria's Secret "Fantasy Bra" more than any other model in the history of the organization. And that bit of hottie trivia brings us to this morning's local, cowtown ripoff . . . Checkit:

OVERLAND PARK, Kan.-- Police are investigating a burglary at a jewelry story overnight near 119th and Roe. According to police, two people busted the windows to get inside Tivol at Hawthorne Plaza. Investigators said a salt crew who was treating the parking lot noticed the broken window.

OVERLAND PARK, KS (KCTV) -- Police are investigating a heist at jewelry store early Thursday morning. Investigators say happened sometime between 3:30 a.m. and 4 a.m. at Tivol near 119th Street and Roe Avenue. According to Overland Park police, someone forced their way in through a window at the jewelry store.

KANSAS CITY, Mo. - Police are investigating a robbery at an Overland Park jewelry store that happened in the early hours of Thursday morning. According to police, the Tivol store at West 119th Street and Roe Avenue was broken into sometime between 3:30 a.m. and 4 a.m.

No alarm system? Anyone smell the makings that an inside job just went down here

Witnesses reportedly spotted a couple of KU basketball players waving chairs over their heads shortly before the sound of glass breaking!!!

poor excuse for a 'heist' really not deserving the dignity of that title. these are low life criminals who did this and will be caught shortly.

this is nothing like about 7 or 8 years or shit, maybe more than ten years by now, when that jewelry store on I believe jefferson street on the country club plaza was absolutely picked clean overnight by thieves who were posing as workmen or construction. they worked for hours with perfect nonchalance. sometimes conspicuousness is the best way to go unnoticed.... someone may remember the name of that jewelry store. now that was a clean job.

^^Blah blah blah. Too long, didn't read. Be concise or be gone!

isn't this the second time tivol has been robbed in the last six months? Didn't some muslim scam the one on the plaza?

You didnt read it because you are too fucking stupid to comprehend it.

Display jewelry in high end stores are good copies, but they are fake.

Oh Chimpy. The zookeeper needs to teach you a new meme you silly monkey!

With their 5,000% jew markup, I'd think they could pay someone to be in the store overnight?

Tivols will make out just fine.
No need for a Go-Fund_Me page yet.

I don't know, Tracy, you're swine, so why not tell us?

The fucking Jew bastards have made millions off the sweat of the poor white trash out there that wants to buy an engagement ring or necklace and the kikes won’t even pop for an alarm,typical greedy Jews. By the way I’ll bet a bunch of other shit will end up missing to pad the list for the insurance company,another favorite kike scam

Mark McDougal former crooked a ceo of firstrust mortgage and his crew which consisted of audra Chandler McMahon certified mortgage planner allegedly set up phony a loans on paper to steal from bigger banks.

Mark McDougal former crooked ceo who had deals with guarantee rate mortgage used firstrust mortgage as a front allegedly never loaning any money to any customers.

Just check recorder of deeds in missouri. Or ks. Oh yeah he and his work force had loans from firstrust mortgage allegedly. Loans sold recouping face amount of loans.

Got away with scamming government with phony loans for years allegedly.

Mark McDougal also owned professional title that he and his mother patty controlled in the same building as firstrust mortgage.


McDougal would string along customers getting their personal info then set up scam loans getting money sent to morill James bank who allegedly controlled escrow accounts.

Loans in underwriting..customers told until they got cash from banks for fha and va loans . Then customers dismissed.


Customers would be told after the crooks got over that they could not do the loan.
Basically getting paid by bigger banks allegedly.


They had no intention on doing any loans just using customers personal info and credit to submit loans in that customers knew nothing about.

Never filed mortgages but would allegedly used forged documents to get cash.

Dirty paper work would be found in their files telling the whole story.


Crooks here and there. Mark McDougal and audra Chandler McMahon

Are these allegedly not robbers too?