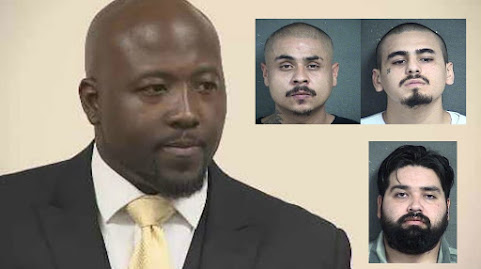 "Wyandotte County District Attorney Mark Dupree said Wednesday that the suspects in a deadly bar shooting and the suspect in a deadly arson will face capital charges."

The Wyandotte County district attorney filed capital murder, second-degree murder and arson charges Wednesday against Ismael Caballero in a late December triple homicide in which two children and their mother died.District Attorney Mark Dupree filed the charges against Caballero after he allegedly killed Amerikha Rodriguez, 14, Jean Carlos Rodriguez, 10, and their mother, Yazmin Rodriguez, and then set fire to a home in the 100 block of North Mill Street in Kansas City, Kansas.After he was taken into custody, police said, "this is an incident that originated from a previous dating relationship."


Shocking! I wonder who had to help him.....I hope he doesn't get re-elected! Worthless, just look at the case of the 2 WYCO deputies famlies hired private attorneys to prosecute the defendant....

This is what happens when politicians invite those who break the law to live in their community.

Kansas doesn't kill. The stupid cunt that runs Kansas will not win again.

Death penalty or not is irrelevant unless stupid motherfucker Dupree gets convictions, which is doubtful. He is almost as worthless as Jean Petersucker Baker

Usually, Mexico will not extradite unless the death penalty is off the table -- so look for a life WOP as the outcome.

Kansas has not executed anyone since 1961. They don't even have a death chamber or any approved place to hold an execution. Why any criminal would be scared of the Kansas death penalty is beyond comprehension.