Here's the word according to these local activists . . .

"Unfortunately, upon showing up, they discovered the police were already alerted and refused to let them inside Davids’s office, despite many of them being constituents. They decided to continue their protest on the sidewalk near her office." 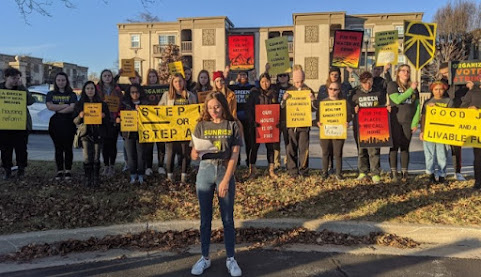 Mary McConville, an 18-year-old high school student, explained that she wanted to occupy the Congresswoman’s office because Rep. Davids hasn’t signed on to the Green New Deal.

"Sunrise Movement KC Hub Trainer Khiana Harris also expressed her frustration with Rep. Davids for sending her a letter about the Green New Deal that used right wing talking points showing little familiarity with the actual contents of the resolution. In the letter, Harris said that Davids wrote “that [the Green New Deal] encompasses many other policies that have nothing to do with our climate.” Harris went on to note that quality healthcare, a federal jobs guarantee, and racial and economic justice are all crucial to solving the climate crisis."

“I’m mad because you could be a champion for me, for all of us. When I voted for you, I was filled with hope for a better tomorrow, and I still have hope. I know you can do it…. And if for some reason you can’t find the courage to step up Rep. Davids, which I truly believe that you can, but if you can’t, then step aside. We have 11 years. We don’t have time to wait on politicians who can’t decide if they actually want to enter the ring with us and fight.”
##########

I don't think rebuke. But they might not campaign for her has hard as they did before, which is all her opposition needs.

Since when does a mob have a right to storm anyones office?

Out of the mouth of babes, sharice is doing the right thing by not voting for the green new deal, damn thing stinks to high heaven. these children have no idea what their doing and should stay in school and learn the scams that are being pulled on them by their dimwit counterparts.

Many of these people were being paid $15 an hour. Can we get some investigative reporting?

It's funny watching Davids being attacked by brainwashed children. Those high schoolers have been propagandized so thoroughly that their views make Davids look like a Trumper

By what method of transportation did they get to her office?

I like strong, smart lesbians who are not beholden to far left / woke weirdos. Go Sharice.

If you aren't old enough to vote, shut up.

Davids was elected by stirring up the mob ho were led to believe that she was going to go to Washington and do everything they DEMANDED.
Now those clueless clowns are seeing issue after issue where she tried to play both ends against the middle.
And they're unhappy.
Trying to encourage the mob and then run in front of it usually results in ending up rather badly.
And her term so far has resulted in losing ground and supporters one after another.
One an done.

The offspring of cucks and yoga twats who think Hunter and Makenzie’s bowel movements are the most clever things ever. Mom and dad will race to see who is first to post the photos on Facebook to show how darling and woke Junior and Missy are.

KS-3 had a golden opportunity to elect a true progressive (Brent Welder) but fucking Emily's List (anti-progressive--see this article at The Intercept) came in and bought it for the 3rd-way neoliberal stooge Sharice.

Mary McConville is lying. She didn't vote for Davids as she is just now 18 years old so a year ago when the election was held she was 17 years old and didn't have the right to vote.
Davids was elected on identity politics and will be gone next year at this time when she loses the majority of the stupid people that voted for her last time as they are now finding out she is doing nothing in Washington DC except cashing big paychecks.

Sharice is a stupid cunt

9:09 You would hit that, just ask your fat stinky significant other.

Bob, Miss McConville said "we", so: not lying.

Miss McConville is an ugly skank regardless of her age.