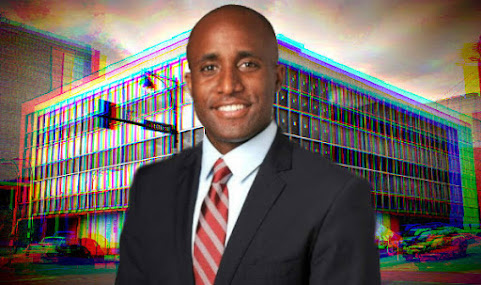 Like all showdowns, this could be an anti-climax . .. Insiders tell us that Mayor & Council are likely to punt on this vote until the NEXT meeting.

CHECK COMMUNITY PUSH BACK AGAINST THE LATEST INSTANCE OF KANSAS CITY CORPORATE WELFARE!!!

Here's the word and a great quote along with locals holding Mayor Q accountable . . .

Kansas City, City Hall, Thursday at 3:00PM -- Leaders from The Coalition for Kansas City Economic Development Reform will be watching City Council vote on the super-sized TIF for Waddell & Reed (a $100million + package in state and local incentives) to relocate its headquarters. The coalition has been opposed to this proposed TIF from inception. This project could have been a new starting point with a development team willing to communicate and negotiate to get the best deal for all members of the community. Instead, it is an extension of the era our mayor and new council promised would end in the last campaign cycle; they were elected on those promises.

“Why isn’t educating our students a part of ‘economic development?’” asked Janet Parks, representing MORE2 within the Coalition for Economic Development Reform. Parks added, “Students who attend and graduate from our public and charter schools can help the city grow a skilled, quality future workforce. But they shouldn’t have to do that when their precious resources are siphoned off to relocate a corporation.”

Key campaign issues included expanding affordable housing and curbing violent crime. If those are the concerns of the city, investing in luxurious office buildings in non-blighted areas at the expense of schools, libraries & mental health services is ludicrous. The group is particularly interested in the final vote from Mayor Lucas, who has been curiously quiet on TIF reform issues since taking office and seems to be a proponent of this project.
#######

HOpefully the mayor will do the right thing. You can't support affordable housing on one hand and then approve this kind of junk with the other.

If it was such a great idea, they'd fund it themselves.

Well janet parks from “more2” kcps students are the most expensive students to teach on the face of the earth, coming in at over $19,000 a year to teach, feed, clothe, launder, baby daycare and give school supplies too, what the hell more do you need? What you should be doing is forcing them to learn while at school instead of dragging the worst school district in the country down any further.

A defining moment for a new mayor who isn’t exactly the cream of the crop! He should think about this very carefully and hopefully let it be! With property taxes at the highest, free transportation which property owners will likely pay for and free taxes for this giant is over the edge of insanity!

What the "Coalition for Economic Development Reform's" six members want doesn't count for much.
But if smiley selfies Lucas and the gang weren't going to eventually approve this fiasco, they could have stopped it way upstream.
KCMO government is little more than a big slush fund to be dipped into by insiders, campaign contributors, friends, any developer with a pulse, and outright grifters.
During campaign after campaign the candidates boldly talk about the needs of neighborhoods and residents and how they're going to finally address basic services.
And within weeks after being elected, they immediately fold to the first test of their new "resolve".
A doctor who could do spine transplants could make a fortune at 12th and Oak.

Lucas's idea of being a mayor is looking good in a suit.

I'm fine with them getting tax breaks. This city is so retarded at managing money that we may as well waste it toward getting new jobs. Sure beats a slush fun for "violence" or "tenants rights" or any other vague idea. Jobs are jobs and the workers are taxed at least

It's a payoff, it's a legal way to bribe someone that in fact should be illegal to do. Over the table top or under the table top no matter how you look at it it's a dirty business deal that needs to stop.

When one looks at the laws pertaining to bribery how is this not what is taking place here?

If Lucas is the so called hotshot lawyer who is teaching other lawyers for Gods sake not be able to see this as a plain out and out bribery, then he should turn in his shingle to practice law.

The less money for Jackson County and the school district, the better because they just mismanage every dollar they get - Look at the property tax assessment mess, look at the unaccredited schools. They are very poor stewards of money. Spending more money on schools doesn't equal better educated students - it's not that simple. The TIF commission should pass every TIF request that comes before them.

Border war jobs don't work like new jobs - either from company expansion or long distance relocation. This is for a long list of legit reasons that are not hard to understand. It's a bistate metro area and those employees won't be relocating. Economic job multipliers don't apply here. Employees change commuting patterns and City hall get it's e-tax to mismanage. Rewarding border-jumping corporations is really an exercise in padding the wallets of lawyers and execs.

Waddell and Reed are in a shrinking industry that is rapidly consolidating. Better have a backup plan if they leave town.

Mayor Selfie, at it again. Don't bother asking him a questions; he is too busy taking selfies with his cheerleaders. Tell him anything other than "great job" and he moves on to the next selfie.

Whatever smiling selfies Lucas does at the end of the day he goes home to his rental apartment, and of course we are the ones paying his rent in addition to everything else now.

Why would he want to put pressure on himself and take the risk of going against the grain with that kind of setup? He can just say "well I did my best but"......

it'll be infuriating when we see them close up after all these incentives, like DST did. -radish

The reality that Springfield Public Schools is now the second largest school district in the state of Missouri is taking awhile for the public to soak in right now. All the corruption at City Hall is coming back to bite them and the voters.

No, he does not go home to his rental apartment. He goes to his favorite gay bar in Lawrence.

My daughter and hundreds more lost their jobs in past few months at W&R. Those bastards deserve no presents from taxpayers. F them.

The fat cats from JO will enlarge their carbon footprints and pay the E tax by driving each day to and from Shitty City Mo. Liberals rejoice. MAGA

In defense of the layoffs, those folks needed to be let go. They half-assed did their job and took advantage of the system. I agree that W&R doesnt deserve the incentives theyve been given.

KCMO City leaders don’t give a shit about either the Republican or Democrat working class. Enjoy your helping of their holiday Fuck You as corporate welfare is given to W&R plus other wealthy companies.

People are so dumb. Kansas City can take the property taxes, albeit reduced, from a $100mm plus real estate development and the 1% earnings tax from the hundreds of well paid workers who would have populated the development or nothing and Kansas City choose nothing. The city diverse to collapse under the weight of poor leadership and ever increasingly violent population.