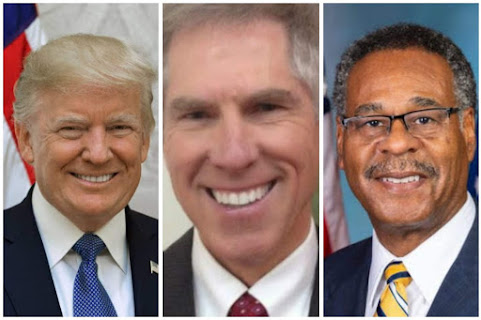 After all these years and given KCMO mostly non-partian voting, Mr. Chastain has finally shared his GOP party affiliation with the public. Here's his latest missive on impeachment . . . And possibly, at the very least, a sign that he's going to give Jacob Turk a run for his money.

Here are some impeachment-oriented questions I intend to raise in the campaign against Congressman Cleaver if I decide to challenge him to represent the 5th Congressional District of Missouri...

1. Congressman Cleaver, in voting to impeach President Trump, you parroted the Democrat's impeachment line that, "no one is above the law." Understood. But what specific law do your party's two articles of impeachment accuse President Trump of acting above? "Abuse of power," and "obstruction of Congress" are not any known U.S. laws on the books. Nor, are either mentioned in the laws of the "Ten Commandments." My opinion: Those two articles of impeachment are based solely on the subjective and negative opinions of liberal Democrats (and their operatives) who have sought to harass, smear and bring down the President from the beginning.

2. Congressman Cleaver, you said (like Nancy Pelosi) you get down on your knees and, "I pray for President Trump." Well, if it is your opinion that Trump should now be impeached because he... "perverted the powers granted to him by the constitution," and he, "stonewalled Congress," then obviously God did not heed the prayers of both you and the Speaker of the House of Representatives. My opinion: Maybe you and Speaker Pelosi should have offered to have a sincere and joint prayer with the President.

3. Congressman Cleaver, the American people elected Trump as their President in 2016 and are set to judge his job performance in eleven more months. Why do you think your impeachment vote is more important than the up coming vote of the American people who hired him - you didn't - in the first place? My opinion: The Democrat's impeachment vote is designed to stain, weaken and oust the President at the polls.

4. Congressman Cleaver, since.... a majority of Americans no longer support impeaching President Trump, your party could not get one single Republican to side with you, you know the Senate will not vote to impeach, this is the kind of partisan impeachment effort that we were warned not to do by the Founding Fathers and the American voters are going to decide the President's fate in 2020...why did you feel compelled to vote to impeach President Trump?

No doubt President Trump would not likely win a personality contest. However, I do not believe the voters elected the President because of his winning personality. They hired him to "Make America Great Again." And, by the looks of things, he's doing a reasonably good job and he's not broken any laws either - according to the liberal Democrats themselves.

And this leads us to our latest impeachment blast . . .

Senate Majority Leader Mitch McConnell, R-Ky., incredulously declared on the Senate floor late Thursday that the Senate and House Democrats were at an "impasse" over whether the House would transmit its articles of impeachment against President Trump to the GOP-controlled Senate for a constitutionally mandated trial.


Will Nancy Pelosi's Gambit to Withhold Impeachment Charges From the Senate Work?

No One in the Senate Is Going to Follow the Rules on Impeachment. Try This Instead. Trump Administration Lists Wakanda as Free Trade Partner on Government Website "Nobody Saw Me." How Sex Trafficking Happens in America.


Chris Matthews on Putin defending Trump during impeachment: 'This is weird'

Answering a question during his marathon annual news conference in Moscow, Vladimir Putin said he did not believe Donald Trump's presidency was "at an end." Chris Matthews says, "Do you think Putin's a member of Trump's party or Trump's a member of Putin's party? I mean, really. This is weird."

After being impeached, President Donald Trump is hoping to move quickly to a vigorous defense in the Senate and is distressed the trial he hopes will vindicate him might be delayed.


Trump Approval Inches Up, While Support for Impeachment Dips

Story Highlights 45% approve of Trump's job performance, marking his third consecutive increase Support for impeachment still contentious, but continues to dip, now at 46% Congress enjoys one of its highest ratings of the Trump era, now at 27% WASHINGTON, D.C. -- President Donald Trump's job approval rating has inched up again and is now at 45%.

WASHINGTON (Reuters) - The U.S. House of Representatives is set to approve a rewritten North American trade deal on Thursday that includes tougher new labor and automotive content rules than its predecessor but leaves $1.2 trillion in U.S.-Mexico-Canada trade flows largely unchanged.


In the shadow of Trump's impeachment, Democrats set to debate in Los Angeles

The last debate of the year comes just 24 hours after the House of Representatives voted to impeach President Donald Trump - an issue likely to be front-and-center on the stage. Seven Democratic presidential candidates will face off in the sixth debate of the 2020 cycle, starting tonight at 8 p.m.

Let's get this straight. Clay is coming out as a Republican in a district that hasn't voted for the GOP since the 30s?

What a great political move.

Will he and Turk at least compete in a hot oil wrestling match to make this interesting?

If all of the democrats are praying, we can be sure that KC will finally see the light and support the President.


Cleaver is not a Christian! Clever is a thief who will do anything for money and his congregation is his meal ticket just like being a congressman and doing nothing. Cleaver has admitted to lying to the people to get his way. Cleaver knows nothing about the bible, he is a phony. Cleaver is a typical black man and needs to be voted out but because his district has a large ignorant black population who knows only to vote color and lives in the past, he keeps getting the votes to stay in office.
We have entered into a civil war and it's a different kind of war the kind where we will do anything we can to get your kids out of the home cost you money by reporting you for looking at us wrong, getting you fired from your job. It has just started!

Pelosi is playing this just right. Dangle impeachment until after the election--just like the Senate dangled Merrick Garland.

Wellll... you must not have read the Harvard Business School analysis of the state of the Economy.

Jobs? Under the standards in place prior to Trump's barrage of Executive Orders (150+, 75 or so still secret) issued the first week he took Office, unemployment is at about 10%, just about where it was before he took over. Changing the methodology by fiat doesn't change the reality.

Improved Trade? Ever heard of China? Those markets are gone, China has found other sources for grain, and the American Farmers are in deep... distress.

Hope and Change? No Trump has generated more of a Hope FOR Change- in the Presidency!

America for Americans? Rich ones, sure - all others shut up and wait for your scraps.

Not just Clay Chastain, but Vladimir Putin too!

With support like this, Trump should not be worrying at all - the entire Republican Party will snap into line with their two moral and intellectual leaders in support of this great American Draft Dodger and Whoremonger!

Clay finally came out as Republican.

And he should be disowned by KC.

You'll never get another petitioned passed. here. I signed them before but not now. Go to Johnson County and see how they treat you. Enough of you Clay. Go back to Virginia!

Billy Graham's evangelical magazine "Christianity Today" ran an article saying Trump was "completely immoral" and "should be removed from Office".

Guess Franklin got the photographs and negatives back from Cohen and doesn't have to kiss Trump's ass anymore.

I like Clay. He has some good ideas but I think it was a mistake for him to come out as a Republican. That will hurt his petitions and his advocacy in KC in the future. Fewer residents in KCMO are inclined to vote for him now.

Big screw up Clay, you should have thought about this more carefully.

Saying you're the "top Republican challenger" in an overwhelmingly Democratic district is like saying you're "Kansas City's Best Blogger," aka "the biggest bug on the manure pile."

So the seven dwarfs were on stage tonight, so boring. You know, Bernie, Sleepy, Bitchy, Swishy, Chunky, Ritchy and Wangy. Nothing new. Free, Free, Free, Free for all!

Trump loses 3 of the key swing states. It's over for him, now we just wait to see how many he takes down with him.

Absolutely anybody but Cleaver!

Clay gets the nomination to run the next day the Star will use the word impeachment in discussing his chances.