TKC MUST READ!!! CHASTAIN SHARES MEAN, GREEN SCREED: 'I HAVE BEEN TOTALLY STONEWALLED!!!' 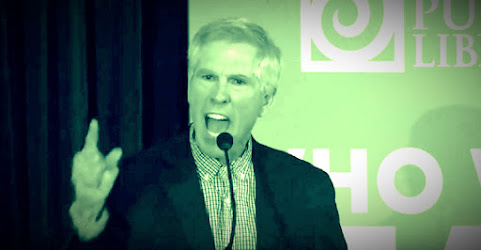 As he considers a congressional run this longtime petitioner demands movement on his voter petition. Take a look:

I, the leading member representing the committee of petitioners, have repeatedly contacted the City's legal department, Mayor Lucas and Councilwoman Shields, seeking an explanation as to why the City refuses to place the people's "Green Transit" petition initiative before voters. I have been totally stonewalled.


Even though this petition was certified sufficient by the City Clerk and presented to the Council way back on April 25, 2019, the City refuses to not only place it before voters but also communicate any explanation for failure to do so. To date, the City has not filed anything in court claiming the petition facially unconstitutional. Therefore, the committee believes the City's legal department, Mayor and Council are merely playing political football with the people's petition. This is a conspicuous act of bad faith by a government against its own citizens, the City Charter voters adopted and the people's constitutional right to petition their government. The committee has filed a complaint against the City with the Missouri Attorney General. However, a petition committee should not be required to have to force the City to be transparent, honor petitions and follow it's own law.

(1) An immediate response from the City's legal department and Mayor Quinton Lucas.
(2) Move to place the "Green Transit" petition initiative before voters on the November 3, 2020 KCMO election ballot.

Please explain why this nonresident ass hole gets any attention.

^^Why do you think you should?


Of course this bogus green transit is not put before the voters, it's part of the democratic totalitarian way. Just take a look at The Paseo fiasco where they used your tax dollars to fund the MLK museum in Atlanta GA.

Way to go Clay, KEEP IT UP WE NEED YOU!

The Mayor and Council know damn well what happens when one of Chastain's issues gets onto the Ballot, and they're scared shitless of the concept.

Save Union Station = PASS! But Chastain's origination of this concept ignored and instead this was declared to be a "Bi-State Citizen's Initiative" or some sort of the same bullshit.

Rapid Transit = PASS! Leaving City Hall to scrabble to find a way to overturn the Peoples will.