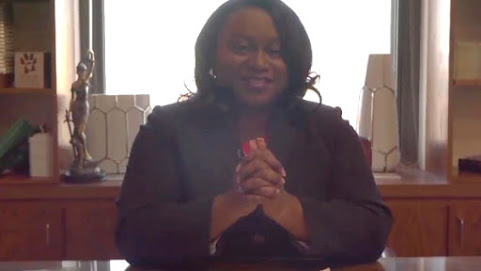 Mayor Quinton Lucas wants to make history at City Hall with his next big decision.

Alissia Canady is a smart lady, a lawyer with multiple degrees and, moreover, she has earned just a bit of conservative support with her stand against MLK Blvd.

Even better, with Canady busy as city manager, she won't present much of a reelection threat to Mayor Lucas down the road.

"She makes perfect sense. At the very least she has some skill and has shown herself to be open to new ideas. Sad to say and sorry if some people don't realize it but she's exactly what Mayor Lucas is looking for . . . The city could do worse. It's just sad that racial preferences are dominating the job search instead of qualifications for the job. There have been some very skilled candidates who have already been turned away. At least with (Ms.) Canady we'll have someone who actually does understand how the city works and has some level of expertise. In a bad situation, she would probably be the best candidate who embodies 'the criteria' desired for the position."

Accordingly and with respect to all of the applicants in this "nationwide" search that's mostly for show . . .

What we know for sure is that it's not gonna be another white dude.

Change can be tough boomers. Sometimes you have to crack a few eggs to make an omelet.

The eggs represent your white fragility.

Better her than Earnest.

If they did this the other way around it would be considered a hate crime.

If they said, no we'd rather have a white guy running things then there would be protests out in the street and a call for the removal of the mayor and anybody who approved it.

But watch, the new candidate will meet the demographic profile.

Personally, I like Alissia Canady but there is supposed to be a nationwide search. Too bad KC can never follow the rules.

^^^ Grow up beetches. Times are changing!

She’s exactly what we don’t need.

A much better way to "make history" would be to have a serious search and hire a COMPETENT person who actually had experience in effective financial management and who focused on providing basic services to residents.
Or, if smiley selfies Lucas wants to focus on make-believe history in the days of identity politics on steroids, he could try to find a bi-racial, black transgender, vegetarian, Muslim woman who was a big climate change booster.
HISTORY!!
The taxpayers always come last with this clown show.

you need years of experience to do this job and she ain’t got none of it. I don’t know what idiot said this or if it’s even true, I like her especially after she stood up to the mayor and clowncil for breaking rules but she’s not qualified for this job. Sorry 5:44, your race card doesn’t work here, ms canady would slap the shit out of you for playing it.

Alissia is very fat. Is her car registration current or do we have to go through that again?

What experience does she have that qualifies her for this position? The city manager job is a cross between CEO and CFO... I like her allot, but come on!

Just what KC needs a city manager who can't even register her car.

As long as they're black, anyone is a candidate for City Mgr. Just bring us your tired, your poor, your BLACK!

Why not Jermaine Reed? Being black, he has the only necessary qualification for the job. Plus, he has an MBA from UMKC. Well, almost.

Why not find the most qualified candidate no matter their color or gender?

@7:29 AM that circus music you hear getting louder and louder is Jermaine driving to city hall in his clown car. He’s been waiting for a gibs me dat job.

I am the first guy to post out the corrupt and ill fated policy of the likes of Clever, James and Reed (MBA). I do think that Canady is great. I would also love to see her take on Clever when he runs for re-election.

Will she get her own parking space?


@ 5:44 and we all know how fragile blacks are when it comes to the workplace with that affirmative action thing. Seems a bit like our white eggs shells are tougher than your cockroach shell.

Meh... still trying to think of some internet comment snarky thing to respond to this teaser.

Who cares what the skin color is...as MLK said ......”LIVE IN A NATION WHERE THEY WILL NOT BE JUDGED BY THE COLOR OF THEIR SKIN BUT BY THE CONTENT OF THEIR CHARACTER”. I would suggest hiring the MOST QUALIFIED PERSON regardless of skin color.

What we know for sure is that it's not gonna be another white dude...

1. the unjust or prejudicial treatment of different categories of people or things, especially on the grounds of race, age, or sex.
"victims of racial discrimination"

Lets get some new blood in this town that knows how to operate a city.

At least maybe she'd have the cojones...sorry, the guts...to finally take down the Dr. Martin Luther King Jr. Boulevard signs and replace them with The Paseo. Like the voters wanted.

She is great and she should get the job.
I do say that when you consistently hire a particular demographic over the most qualified candidate you will end up with a poorly functioning city. Projects will be mismanaged when unqualified people make decisions.

Would she get a reserved parking space?

Canady wouldn’t be the first black city manager. Mary K. Vaughn was the first, in 1993-94. They can’t get anything right down at City Hall, not even their own puffery. Remember, if you’re not first, you’re last.

Imagine how much better KC and Jackson County would be if they hired based on merit, not on quotas.

She sure knows how to manage a spoon.

Who wrote that endorsement?

As long as the next city manager fires all Troy’s appointed department directors, I’m good

I don't need no stinking tags on my car.
I am a Kansas City Star.

She is even fatter than fat Troy.

She is aware of the power structure created by Troy Schulte and must determine if his remaining followers are complicit in the unethical, unprofessional and fraudulent tactics that will be revealed without Schulte to coordinate the false narratives. The structural budget deficits throughout the entire city budget created in part to fund projects rejected by voters and some I’m sure we don’t even know about.

There is now the opportunity for the truth behind all the employee lawsuits to be revealed without Schulte to misrepresent causation and diminish the role of his administration. Employee lawsuits will reveal the deceptive culture propagated by Schulte resulting in millions of dollars in judgements, settlements and most importantly the impact of the lives of real people; tax paying citizens.

Schulte could not have done this without compliance from others; the question is how many of them are still employees. The motives of these decision making employees could be called into question for years to come. Obviously this includes department directors, but it also includes the lesser known employees placed in positions that have far reaching impact, such as the Internal Auditor. What will be investigated, what won’t be investigated, will the investigation be impartial, will the investigation be thorough? These are questions that will hinder the Internal Auditor and Compliance staff going forward and for good reason, as the Internal Auditor worked extremely close to Troy Schulte for more than 10 years.

The Ethics Commission must take measures to ensure ALL COMPLAINTS submitted via the ethics hotline, email, etc., are accounted for and subjected to an independent review before dismissed as unfounded. Investigations of employees must also be reviewed independently to ensure actions or the lack of action by the previous city managers administration are awarded due process. While the obvious appointees with clear allegiance to Schulte have retired, there is a significant number of employees that are aligned with Schulte and see him as a mentor and have the ability to impact investigations.

300 million people to choose from and she’s the best, I think not!

1:22 pm, the Ethics Hotline is a joke. If you’re an employee and are found out to have called in a violation, you will be fired.

Learn how to spell before making such outlandish comments. Who is "Clever"?