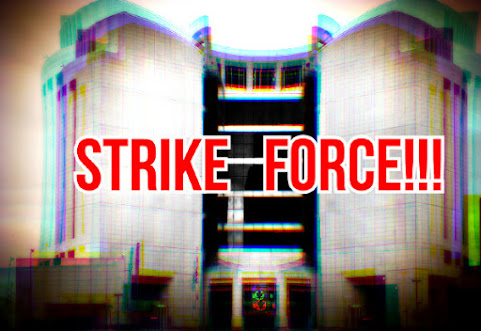 Afternoon news blast offers a bit of hope as Kansas City violence escalates at the end of the year and still threatens to break a historic murder record.

Our first look at the effort tells us:

This is welcomed news as violence in Mexico ramps up and threatens to spill across the border. Already our blog community has outlined more than a few instances where cartels have left their mark locally . . . Of course the crackdown documents a few illegals busted but then promises to continue enforcement from there . . .

Now, here's a glimpse at law enforcement pushing back against rising drug crime throughout the metro . . .

McAllister and Garrison held a joint press conference to announce that local, state, and federal law enforcement officers are working together on Strike Force cases.

“The Strike Force already is conducting investigations and filing charges against the criminals who are poisoning our community with drugs and violence,” McAllister said. “Crime does not stop at the state line and neither does the Strike Force.”

“This new Strike Force presents a united front against drug trafficking and violent crime throughout the metropolitan area,” Garrison said. “We are marshaling agents and officers from both Missouri and Kansas under the same roof and equipping them with additional investigative resources to better protect our community from the violent scourge of drug trafficking.”

The Strike Force, which launched in April 2019, is targeting drug trafficking organizations that are making the streets of metro Kansas City less safe and more violent by importing large quantities of methamphetamine, heroin, fentanyl, and other drugs from Mexico and elsewhere.

The OCDETF Strike Force in metro Kansas City includes members from the FBI, DEA, and ATF, as well as the police departments in Kansas City, Kansas, and Kansas City, Missouri, the Jackson County Drug Task Force, the U.S. Marshals Service, Homeland Security Investigations, the Internal Revenue Service, the Kansas Bureau of Investigation, the U.S. Secret Service, and the U.S. Postal Inspection Service. Federal prosecutors from the U.S. Attorney’s Offices in Kansas and the Western District of Missouri will prosecute the Strike Force’s cases in federal court.

The goal of the Strike Force is to disrupt and dismantle criminal organizations, including gangs, cartels, and others that are trafficking in drugs and firearms, or engaging in money laundering.

Participating agencies have agreed to assign full-time personnel to the Strike Force. Police officers, federal agents, and prosecutors are working together under one roof. For security reasons, the location will not be made public.

An FBI Assistant Special Agent in Charge manages the Strike Force’s three teams: a major crime squad, a major threat squad, and a fugitive squad. A Strike Force Executive Council, whose members include both U.S. Attorneys, will oversee the Strike Force.

As an example of the work of the Kansas City Metro OCDETF Strike Force, an investigation across state lines resulted in separate indictments being brought in both Kansas and Missouri last month.

In Kansas City, Kansas, the Strike Force investigated a case (U.S. v. Jose Manuel Delgado-Hernandez, et al.) that resulted in federal drug conspiracy charges against six men who are accused of distributing methamphetamine, heroin, and fentanyl that came to Kansas through a pipeline that begins in Mexico.

The indictment alleges the organization’s distributors at the street level were operating within 1,000 feet of Kensington Park playground and Wyandotte High School.

During the investigation, law enforcement seized 19 pounds of methamphetamine, 66 pounds of marijuana, and firearms, including handguns and a military style rifle.

In Kansas City, Missouri, the parallel Strike Force investigation resulted in a case (U.S. v. Christie D. Holloway, et al) that included federal drug conspiracy charges against four defendants who are accused of conspiring to distribute methamphetamine. One of the defendants is accused of illegally possessing a firearm

Other Strike Force cases include:

- U.S. v. Luis Martinez-Carrango, et al.: Agents seized more than 220 pounds of methamphetamine when they served a search warrant at a house in Kansas City, Kansas. Fourteen defendants were charged in a 33-count grand jury indictment. During the investigation, the agents also seized approximately 140 gallons of liquid methamphetamine being transported from Douglas County, Kansas, to Lees Summit, Missouri.

- US v. Lionel Simpson: In November, Simpson was sentenced to 10 years in federal prison after pleading guilty to selling crack cocaine to undercover agents during meetings in grocery store parking lots and gas stations in Kansas City, Kansas. He was arrested with a backpack containing gloves, a mask, a gun, and a 50-round magazine. He said he kept it in case he ever ran into a rival gang member who was responsible for the death of his sister.

- U.S. v. Jovanny Medina, et al.: Medina was indicted Oct. 23, 2019. The indictment alleges he was arrested during the unloading of 35 pounds of methamphetamine from a car hauler truck in the parking lot of a Dollar General in Kansas City, Kansas.

- U.S. v. Ladele D. Smith, et al.: Twenty defendants were indicted for their roles in a drug-trafficking conspiracy. Approximately 200 federal agents and local law enforcement officers were involved in an Oct. 2, 2019, operation in which most of the defendants were arrested. During the operation, officers seized 23 firearms, heroin and other illegal drugs, and $75,000 in cash. The indictment alleges the defendants participated in a conspiracy to distribute at least a kilogram of heroin, as well as cocaine, crack cocaine, oxycodone, codeine, and marijuana.

The charges contained in these indictments are simply accusations, and not evidence of guilt. Evidence supporting the charges must be presented to a federal trial jury, whose duty is to determine guilt or innocence.

Agency officials who are working with the Strike Force made the following statements:

- Timothy Langan, FBI Special Agent Charge, Kansas City Division: “The creation of the KC Metro OCDETF Strike Force provides a collaborative effort, serving as a force multiplier to effectively protect the public, by targeting the command structure of major international and interstate drug organizations. We have already seen success with the establishment of this task force locally, through the recent indictment and arrest of multiple subjects in an ongoing drug conspiracy investigation in the Western District of Missouri. That investigation, as well as future investigations, will aim at dismantling, disrupting and prosecuting the hierarchy of these organizations through a concerted effort of federal, state and local law enforcement.”

- Erik Smith, DEA Assistant Special Agent in Charge: “The DEA Kansas City District Office is pleased to collaborate with our federal, state, and local partners in this Strike Force endeavor. The prevalence of drugs and violence is a threat to this community, and a concerted focus on addressing these threats is required from all federal, state, and local law enforcement. We are committed to doing our part.”

- Marino Vidoli, ATF Special Agent in Charge: “ATF’s unique expertise in using crime gun intelligence to identify those involved in gun crime and our experience in investigating how firearms are acquired by violent criminals in our communities, allows us to be an integral part of the Strike Force efforts to find, and hold accountable those responsible for violent crime. The Strike Force strengthens ATF’s long standing tradition of partnering with federal, state and local law enforcement agencies to reduce violence and make our communities safer.”

- Richard Smith, Chief of the Kansas City, Missouri, Police Department: “Drugs and violence have no boundaries in Kansas City or the metropolitan area. We look forward to continuing our partnership with the Strike Force to combat violence and provide a safer community for all. Working together provides additional tools and resources to identify violent offenders and remove them from our streets.”

- Michael York, Chief of the Kansas City, Kansas, Police Department: “The Kansas City, Kansas, Police Department is looking forward to working with our federal partners and local agencies with the hopes of reducing violent crime not just in our city but the entire metropolitan area. The new Metro Strike Force will be a force multiplier for agencies that are dealing with violent crime such as homicides and drive by shootings. We have already experienced success in the short time that Strike Force has been operational.”

- Ron Miller, U.S. Marshal of the District of Kansas, and Mark James, U.S. Marshal of the Western District of Missouri: “The U.S. Marshals Service looks forward to combining its fugitive targeting expertise with the overall significant drug and violent crime investigations pursued by the KC Metro OCDETF Strike Force. Together, we are a stronger force against criminal organizations impacting the Greater Kansas City area.”

- Paul Shade, U.S. Postal Inspection Service: “Our agency will assist in any matters that involve criminal activity while using the USPS to further their crimes. This includes but is not limited to the trafficking of narcotics and narcotics related U.S. currency being shipped through the mail.”

The prosecutions announced in this release were brought as a part of the Department of Justice’s OCDETF Co-located Strike Forces Initiative, which provides for the establishment of permanent multi-agency task force teams that work side-by-side in the same location. This co-located model enables agents from different agencies to collaborate on intelligence-driven, multi-jurisdictional operations against a continuum of priority targets and their affiliate illicit financial networks. These prosecutor-led, co-located Strike Forces capitalize on the synergy created through the long-term relationships that can be forged by agents, analysts, and prosecutors who remain together over time, and they epitomize the model that has proven most effective in combating organized crime.

A border wall would also help.

^^^ Not really, would not stop demand or drugs by way of ports. Treatment and counseling need to be part of the equation. They have been proven to be effective.

Get that Fentanyl the fuuuuck outta here

They should legalize meth. I have been using meth daily for over 15 years, which proves it is not addictive. Have my own house and car paid for. Retiring in 17 months. Never once set foot inside a jailhouse. Always had a lot of younger women to fuck.

We have to stop the U.S. demand for drugs. Teaching people to fight their addictions and stay clean is a big part of the process. Other countries don't have such a big problem because they don't use the level of drugs that the u.s. imports. If don't super size our drug habits then there won't be such a problem.

Legalizing marijuana is a big part of this too.

For me, what this statement is really saying is that our local courts have failed and now the U.S. Attorneys have to step in in order to try and clean up the mess. They're doing the right thing but this makes our judges look powerless to keep order in Kansas City.

but this makes our judges look powerless to keep order in Kansas City.

The Judges can fuck off come election day!

So what? If the cops arrest that hood rat, Jean Petersucker Baker would drop charges. He is probably already on probation for previous crimes.

They will face Federal charges thats what.