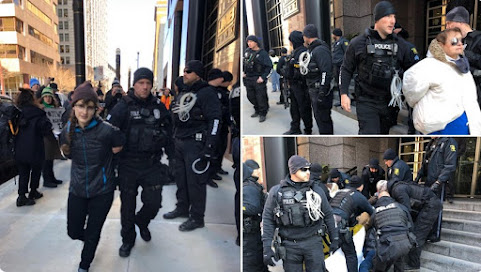 Culture war and progressive outrage against this Kansas City most prominent family -- The Kemper Clan -- Sparks outrage inside the loop today.

A peek at the Twitter thread: "KANSAS CITY, MO: #JewsAgainstICE, immigrants, and allies are headed toward @UMBBank headquarters to hold them accountable for profiting off of ICE detention centers."

This December Jews, immigrants, and allies are going after ICE with everything we've got. The national wave of action is going to be anchored by simultaneous actions on December 10th, at the Wyatt ICE Detention Center in Rhode Island and in Kansas City at UMB Bank, the profiteers who are suing to stop the Wyatt from being closed.

UMB Bank is headquartered in Kansas City. But they're doing everything they can to earn profit off of imprisoning immigrants across the country, and particularly at the Wyatt in Rhode Island.

After local officials moved to stop detaining immigrants in the Wyatt Detention Facility in Rhode Island, UMB Bank opened a $130 million lawsuit to force them to keep their ICE contract. UMB and the bondholders it represents are doing everything they can in order to make money at the expense of immigrant lives.

Over the summer, Never Again Action Kansas City joined with the Kansas Missouri Dream Alliance to shut down Representative Sharice Davids' office demanding she explain her plan to #ShutDownICE, close the camps, and protect our undocumented neighbors. In September, artists descended on the Kemper Museum of Contemporary Art to call out Mariner Kemper, the museum trustee and UMB Bank CEO suing to keep immigrants in prison.

While Never Again Action Rhode Island takes action to shut down the Wyatt on December 10th, we'll make sure that the company responsible for keeping it open hears from Jews, immigrants, and allies in Kansas City.
#############

gotta give them credit for one thing: it's damn cold out there, they obviously believe in what they're doing!

^^^ Any protest against Mariner is worth it.

And the Founder of this "movement" is...

25 year old Serena Adlerstein is from Portland, Maine. She is currently a junior at Gallatin, NYU’s school of individualized study where she is exploring how to use art for social change.

Just in case your curious

These people need jobs so they wouldn't have time for this silly stuff.

They’re getting paid $15 an hour to protest

The real threat to society isn't the detention center but the protesters themselves.

They have my full support.

The 1924 law that Stephen Miller is so fond of should be repealed.

And he should be fired.

It's cold outside. Throw 'em in the oven to warm up.

First comment says what I was gonna say! Freeze their ass off for free speech-good on them. -Radish

If Byron supports something you have no doubt it's wrong.

House full of DemoRATS and instead of trying to kick Trump out of office Byron, maybe they should be trying to change a law that you say is wrong. But looks like your fellow RATS don't have a lot of concern with the law since it appears they have and are ignoring it so they must be okay with it.

^^^^ Your ReTHUGlican President is also ignoring the law.

Good about time more of these nut jobs like Byron are getting thrown in jail.

They're getting paid to be there. It's not a real protest if you pay people for your cause. I have all my accounts at UMB and have for over a decade and will continue to do so. I support ICE

^^^ MS Adlerstein did a gofundme last June to start this organization and raised 180K so yes they are likely getting paid to be here.

You need a job too Stupor Duck and I have a suggestion:

The pay is lousy but the hours are even worse.

IT'S THE DEEP STATE AT WORK CHUCK!!!

Except there is no such thing of course.

Looks like umb bank has half the police dept there to protect the bank, you nevar know what to expect out of these dumbass loser crybaby whiny little babies, they are violent thugs and should be dealt with accordingly. ICE has 95% of the country’s support. These idiots very little.

Please, please, please guys, keep up the "protests" that disrupt everyday people's lives, inconvenience them, and show your absolute contempt for an orderly society. Do it every day. It will make you feel really good, accomplish nothing, irritate all the taxpaying voters, and guarantee a Trump victory.

Facial Recognition Software is incredible at identifying Protesters for legal authorities.
With these people against a Secure America... let’s use the software to ID them and see if California will take them.
How unAmerican these Protesters are.
How many more crimes including Murder and Rape should Americans endure at Illegals being here?

We can start it in KC and it can be free. Give out free money. Free everything.

Why stop at free bus rides? Raise the Earnings tax to 5%!

Let’s tax California people 10% and put it in KC coffers !

1:30 do us all a favor and go first and take Byron with you.


urrmmm...aren't jews the ones who have built machine gun lined, concrete walls to keep Palestinians from "migrating" back to their homeland that israel confiscated?

They aren't locking up immigrants. They are detaining aliens illegally present in the US.

Without borders, their is no nation. Oh, Wait, maybe that is the desire of these protesters? Is "immigrant rights" merely a trojan horse for their true adjenda?, much like climate change?

Kudos to UMB for helping enforce the law of the land, and making some money at the same time.

I'd be surprised if any of the protesters get so much as a slap on the wrist. They are in cahoots with local prosecutors and courts, who are not at all interested in enforcing the law.

When it comes to this kind of stuff, I wish that more people would adopt the attitude:

It is NONE OF YOUR DAMN BUSINESS who or what a private company like UMB associates wish.
If you don't approve of it, don't do business with them. End of story.

You people are not the judge and arbiters of who can associate with what or whom in this world.
You don't approve of UMB associating with ICE? SO WHAT????
WHO CARES that you people are "OUTRAGED" AND "DEMANDING ACTION"????

This world does not revolve around what you people find "acceptable" or not.

This is what I wish the rest of us would start openly telling these people when they start engaging in this kind of garbage.

MAY all the protesters get HEAD LICE and other THIRD WORLD DISEASES brought to the midwest by our wonderful LAW BREAKING ILLEGAL ALIENS.

Perhaps, at the next congregation of degenerate protesting maggots, we shall offer them bars of soap.

They are not getting paid for being there. The customers could still go in and out of the bank. The point, I am sure, was not to cause a problem for the public. It was just to let people know what UMB is doing and bring it to the forefront of peoples mind.

Protesters don’t appear to be too smart.

If they read the UMB statement they will see the action is required by law and was initiated before ICE.

Next thing you know they will sue God for gravity because their skin sags... and not appreciate how gravity keeps them and all their lunatical friends from flying off the face of the earth.

There really is a #JewsAgainstICE? What F'd up world did I wake up in this morning?

OK boomers, you've had your say. Now it's time to watch some Faux news.

These protesters did the right thing. Good for them.

^^They sure did they got thrown in jail....LOL

5:28 ok Hillary, time to give up any hope of you winning the election, the gig is up and you still lost!