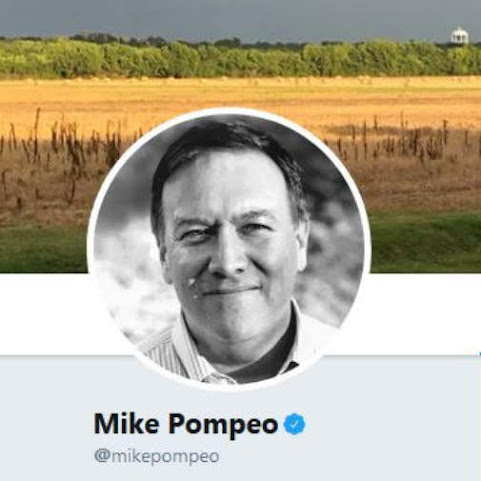 Social media start to a campaign that was telegraphed, DENIED and then leaked via online gossip. MSM "reveals" the personal Twitter account of Secretary of State Mike Pompeo yet again signaling his run for the Kansas senate seat.

"A source close to Pompeo said that the Republican “needed to set up a personal Twitter account for future plans,” strongly indicating the secretary is laying the groundwork for a run.

"A second source close to Pompeo confirmed it is his personal account, initially launched in August but only recently activated with imagery and followers.

"Pompeo describes himself in his Twitter biography as “husband, father, Kansan and proud American,” underneath a rural landscape evoking his home state.

"Pompeo has quietly considered a run for retiring GOP Sen. Pat Roberts’ seat for months, as Kansas Republicans grew increasingly concerned that another leading candidate, Kris Kobach, Kansas’ secretary of state, would jeopardize the seat if he won the party’s nomination."

To make people happy in 2019 -on, one's internet foot print has to include only promotion of homosexuals, illegals, black advancement over every other race ( notice other races are left out in most causes) illegal drugs and the promotion of the modern confusing of how Socialism really works vs fantasy. I assume his foot print didn't promote butt sex and free cheese. Therefore the whine.

So he's been lying to us for months about running?

His taxpayer paid visits and events were really campaign activities?

Screw this lying conman. He's assuming that Kansans are idiots. Pompoe's campaign should be DOA.

Just what the senate needs - another warmongering Republican.
-Radish

Kansan? He's a Californian. He didn't move to Wichita until 1998 for a business opportunity and some Koch money. He can't even tell the truth about his background.

Politicians that won't obey a Congressional subpoena and instruct their staff to ignore the rule of law don't get elected to Congress.

^^HA! He will. He will mop up any opponent and will make a great Senator. I will enjoy six years of liberal whines and tears.

When did Pompeo take that pic? Dude's packed on quite a few. Time for a new profile photo.