And so tonight, we know that Kansas City Chiefs QB Patrick Mahomes is the King Of Ketchup and truly a rising star in a way that's for more important than cringe-y low-rent endorsement deals and discount merch . . . 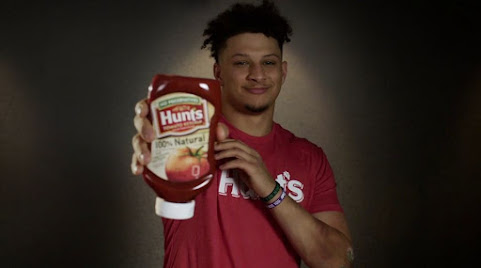 The Kansas City Chiefs have never before enjoyed such a run of success like this one. When Andy Reid and the Chiefs clinched the AFC West title back in 2017, they celebrated the first-ever consecutive division titles in franchise history.

The Kansas City Chiefs defeated the New England Patriots 23-16 on Sunday to win their fourth consecutive AFC West championship at Gillette Stadium. First drive: The Chiefs first play of the game was a 1-yard run from LeSean McCoy. After an incomplete pass, the Chiefs faced third-and-long early in the drive and Patrick Mahomes threw his first interception of the game.

Equipment Snafu Story Is Only Exciting For Jock Sniffers


Chiefs avoid forfeit vs. Patriots by getting their gear from NJ

The Kansas City Chiefs and the New England Patriots are preparing for a big AFC showdown with major playoff implications today. And it turns out the Chiefs almost had to forfeit before the game even started...

The Chiefs' defense turned in the performance it needed to take the Patriots further down in the AFC playoff picture. Kansas City (9-4), as a field-goal underdog, held on to beat New England (10-3) in Gillette Stadium, 23-16. While the Chiefs won their third consecutive game to move within a game of the Patriots for the No.

Watch live: The Kansas City Chiefs have snapped the New England Patriots' 21-game home winning streak with a 23-16 win at Gillette Stadium. The Chiefs are the first team to beat Tom Brady and Bill Belichick in New England since the Carolina Panthers beat them 33-30 on Oct. 1, 2017.

At the end of the third quarter and into the fourth, the Patriots had several plays go against them due to missed calls by the refs.

In sports, fandom is often passed down over generations. Actor Henry Cavill's NFL support, however, is a little different. Since he was born on this island of Jersey, no one in his family supported an American football team; he took that into his own hands, however, and picked t he Kansas City Chiefs.

There's no denying an impressive and important win for Kansas City that might or might not be their first REAL step toward post-season glory.

Not a fanboy. But fun to see the Pats replaced. They were never "America's team" they ruined the Super Bowl for years.

Still one and done in the playoffs?

OMG! ^^^ The beat the super bowl contenders. This is a DAMN BIG DEAL. Don't be haters. Like I've said dozens of times before on this blog, the Chiefs are the real deal this year and they have shown time and time again that they are real contenders. Deal with it. Most of KC knows it, sorry that some of the grumps on this blog don't want to realize it.

^^^^ easy there tiger, until they can prove they can win big playoff games this game means nothing, the pats are a prime example the regular season doesn’t matter that much, they live for the playoffs and the Super Bowl, the chiefs have proven for decades that they can’t win the big ones. We all hope that changes someday but until they consistently win the big ones it’s the same old chiefs and we’ll get’em next year.

Texans and Titans both already beat the Chiefs - and HOU did it 'in' KC.

HOU beat NE, like KC did. Ravens beat HOU in BALT, lost to Chiefs in KC.

BALT also beat NE and they also beat BUF who is the second best team AFC.


What does it all prove? That nothing is certain, that 'on any given Sunday', any team can win.


Right now, BALT is head and shoulders better than anyone else the AFC, and playing at home post season, they are the best bet to go to the Superbowl.


This year will be different? Right.

Could care less? Great, so you care some, since you say you have the ability to care less, right?

Unless you're retarded and you "couldn't care less."

I know how I'm betting! Halfwit.

Hey 8:36-how does Mahomes dick taste?

Q: Who holds the following rankings vs other NFL QB's?

Leads all NFL QB's in td passes with 28, rushing yards with 1,017 and total tds produced by passing and rushing 35 (just ahead of the runner-up Deshaun Watson's 32)

Did the Cheatroits have anything to do with the airport equipment snafu ? NFL needs to investigate.

Pats are right.... Got beat by the Refs.

The refs called three phantom calls on the Chiefs too.... so it evens out.

It was a very poorly officiated game on both sides. There were three roughing the passer calls not called against the Pats. There was a mysterious offensive pass interference call on Travis Kelce where he make legal contact at the line of scrimmage. There was an unsportsmanlike conduct call against the Chiefs for a blind-side block that never occured. The first pass interference call against the Chiefs on Brady's first possession was non-existent and there were three obvious Patriot pass-interference calls that were somehow missed. So if you're crying about the refs, that's a losers lament. Deal with it, the Chiefs were better. Period.

comment from 12:38pm, freakin A man well said. but the comment someone made above about playoff games being the true test - yeah that's the issue isn't it I am encouraged by the win, deserved success. that titans loss still is a sore bruise so this one helps a lot. thanks, radish