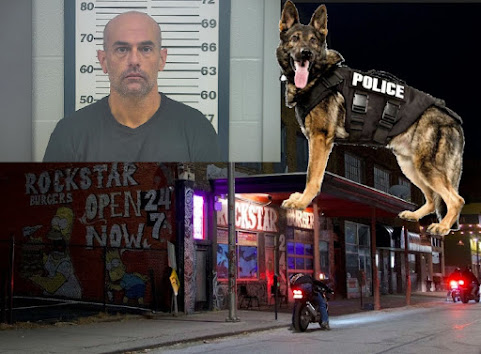 The Kansas City Police Department said it served a search warrant at Rockstar Burgers at 1611 Genessee Street regarding an "ongoing sexual assault investigation." However, police said their search was not related to the arrest last week of Rockstar Burgers owner Brian D. Smith.

KANSAS CITY, Mo. -- Officers from the Kansas City Police Department are conducting a search warrant Monday in the Rockstar Burgers building as part of an ongoing sexual assault investigation, according to Sgt. Jake Becchina. Brian Smith, owner of Rockstar Burgers in the West Bottoms, was charged Friday with domestic assault and armed criminal action for allegedly beating up his ex-girlfriend.

KANSAS CITY, Mo. - Kansas City, Missouri, police executed a search warrant Monday at a controversial restaurant in the West Bottoms. KCPD Sgt. Jake Becchina said investigators were searching all three floors of the building that houses Rockstar Burgers in the 1600 of Genessee Street.

Unless he flushed it all. There was surely a lot of evidence to be had. EVERYBODY knew that place was dirty.

How many robbery's occurred while they were doing this.

How come they aren't out pulling over speeder and reckless drivers ruining Midtown?

Because who fucking cares, grandpa?

^^^^ Easy there, tiger. We can't all be as cool you. Hanging out on a blog and claiming your superiority. Good luck with that!

Damn whipper snappers and your grandpa jokes. Just leave Matlock out of it this time.

Congratulations. That's the dumbest comment of the day. You win a $20 gift card to Bob Evans.