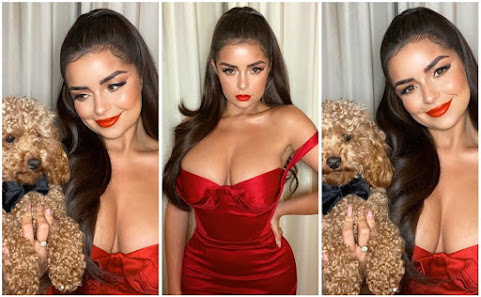 Tonight we take a peek pop culture, hotness, community news and all manner of local items of interest . . . Checkit:

KANSAS CITY, Mo. - Jackson County awarded more than $10 million in contracts for improvements to the downtown courthouse. Jackson County legislators on Monday unanimously approved the two contracts, which will cover restoration of the building's six elevators and repairs to the basement, which was damaged by flooding earlier this year.

KANSAS CITY, MO. (KCTV) --- The Kansas City Zoo is welcoming some new macaroni penguins. The zoo says it's the first time in the 110-year history of the zoo that they will be home to the penguins. Eggs from SeaWorld in San Diego were flown in to hatch there.

Hotness For The Holidays

She has conquered Instagram and is now a model who is known for her risqué photoshoots. And Demi Rose was sure to set pulses racing as she stepped out for the HLD Christmas party, which was held at Yuu Kitchen in London on Friday.

LEAWOOD, Kan. - The city of Leawood, Kansas, and Ring, the doorbell camera company, have partnered to offer the first ever subsidy program in Kansas. The first 300 Leawood residents to attend a launch event Wednesday from 6 p.m. to 8 p.m. will receive a $100 discount to purchase a Ring product on location.