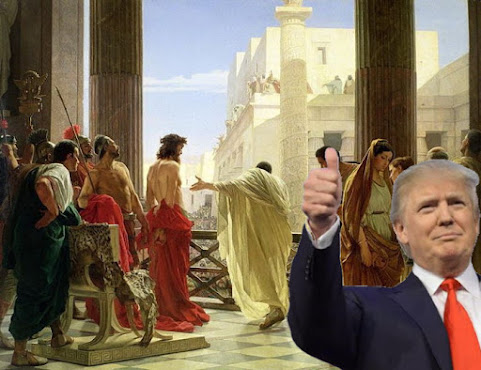 The topic of prayer and politics pushed to the forefront of the American agenda this week and punctuated an intense debate over impeachment.

And then a monumental rebuke from a massive American faith community slammed down on the Head Of State in a mannner far more important than progressive opposition.

Here's the best write-up we've seen on the right-wing betrayal and its implications . . .

(Prez) Trump Is Freaked Out by Christianity Today’s Support for Impeachment - He should be.

Something to consider via insiders . . .

NO REPUBLICAN HAS WON THE WHITE HOUSE WITHOUT ENTHUSIASTIC EVANGELICAL SUPPORT SINCE PREZ EISENHOWER!!!

This Christian voting block is the foundation of the Republican Party and division here is a warming sign that there is, in fact, some weakness in the support for the Prez.

Yes, there will always be diversity of opinion in any group but WITHOUT ACTIVE ENDORSEMENT FROM EVANGELICALS, REPUBLICAN CANDIDATES LOSE THE WHITE HOUSE EVERY TIME. Don't believe it? Ask Prez Gerald Ford, Prez Bush I, Sen. Mitt Romney and Sen. John McCain. 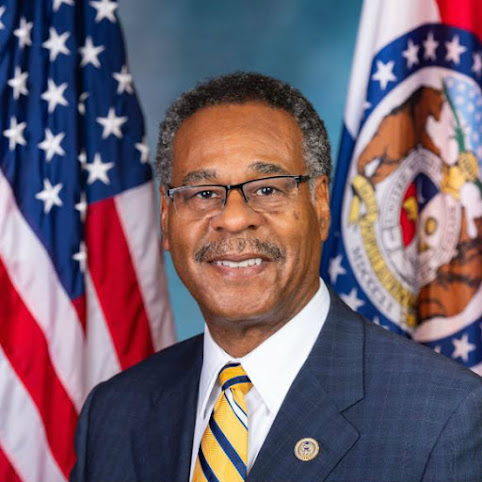 Former Kansas City Mayor and faith leader Congressman Emanuel Cleaver, II doubled down on the sentiment and after impeachment noted that he does not hate the President and prays for the Commander-In-Chief.

From his letter this week:

"Impeachment, at least for me, is a stomach-churning experience. I do not hate this President. In fact, in my faith tradition, we are taught to pray for “kings and all those in authority.” Therefore, I pray for President Trump. When the day is spent, I kneel beside my bed and pray for our leaders and for the reconciliation of our nation."

Drilling down even further to the KCMO discourse -- Via his blog former newspaperman Bill Tammeus asks:

How should we be praying about impeachment, conviction? 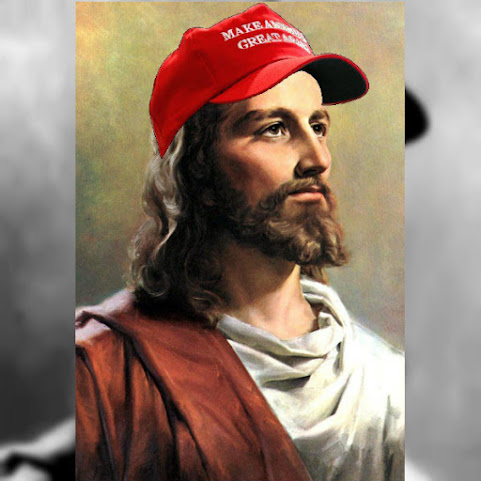 "In the case of national issues, whether that means war or unemployment or impeachment, I think prayer should be thought of not as a tool of demand but as a tool of exploration, of humility, of longing. We should be open to answers we don't expect. We should not assume we know the result for which we should be praying. Rather, we simply should put ourselves in God's way and listen."

HAS THE IMPEACHMENT DEBATE CAUSED A MOMENT OF DOUBT AMONG FAITH COMMUNITIES OR IS PRAYER THE LAST REFUGE OF POLITICAL SCOUNDRELS?!?

For better of worse, the debate over faith and politics inspires the 2019 American Christmas given that this time of year is mostly consumed by chubby shoppers busying themselves with running up credit card debut in order to garner cheap Chinese junk.

But I think the real question here isn't about praying for the President. That's a matter of choice and personal preference between a person and God.

The real question is, should an elected official make their prayers public and part of their sales pitch to voters.

The answer on that is a resounding NO!

But if that's true for Democrats it should also be true for Republicans who wear their faith on their sleeve and claim that God is on Trump's side.

I was inspired that our president hooked up with stormy daniels and playmate karen mcdougal around the time his wife was pregnant. glad my president was able to do some deep polling on these women without protection and come away clean.

Obviously he is a man of great faith. More power to him!

Just like immigration and border protection, the president wants to end abortion and that is the real reason the evangelicals support him. that's the greater evil that overshadows everything.

^^^^ Except the admonition of God to
"JUDGE NOT, LEST YE BE JUDGED"

Trumps not going anywhere. Get used to it.

^^^ Trump loses. If the Christians have given up on him. He's toast. Sorry that you love Trump more than God.

I pray Cleaver goes to heaven, after he pays of his loans.

Sad that none of you have considered the possibility that all of your politics and leaders just using religion to manipulate voters.

The pretense that Pelosi, Cleaver, Democrats all, are sincerely "praying for the President is the definition of preposterous.

Just the lies they told, the entire bunch of them, during the "Russian Collusion" hoax, from Adam Schiff, to Pelosi, to Cleaver, the media and the lies told under oath, by shitheelfucks like Brennan are TOO MANY TO COUNT.

But sure, let's pretend that we all now believe they are "Praying for the President."

I'm a Democrat, and concerned about the less fortunate and poor and struggling more then anything, and will now pray for Trump as well.

Oh is there Chiefs game today? We should pray for Mahomes too. That he makes many touchdown passes and leads us all to the promised land known as the Super Bowl.

Presidents come and go. We've had 45 of them so far.

“U.S. Attorney John Durham, who is conducting a criminal investigation into the origins the Russia probe and FISA abuse, is focusing in on former CIA Director John Brennan.“

Just the tip of the iceberg. The deep state is going down, this is what happens when a good man is president and has true intentions for the hardworking American people. The people that need prayers are behind all the greed, corruption and lies. They are everywhere in government, on both sides of the isle, they are all about to get a rude awakening!

^^^^ Who ever said the President was a good man?

I guess you're not one of the employees that he refused to pay over the years. Those spy games are all conspiracy theory trash. Politics is a popularity contest and this presidental troll has made too many enemies out of better people.

"...Republicans who...claim that God is on Trump's side." Doubt that's true. Give prominent examples.

The picture at the top of the page, is Antonio Ciseris "Ecce Homo" (Behold the Man) portrait of Jesus and Pontius Pilot, prior to the famous "Ablutions" trying to calm the populace before an out of control riot could take place.

Jesus had essentially started a bar fight in the Temple, knocking the shit out of people and turning over tables with money, because he (Remember, Jesus was a "Zealot" in the true sense of the word, a "Zealot" in the tradition of the Maccabees.) thought it disrespectful.

The Jews, languishing under the suzerainty of the Roman Imperium, were constantly rioting, revolting and testing the military in their efforts to remove Roman rule.

Roman rule depended upon cooperation from Jewish leaders. There was no great Roman army in Judea, only the threat to bring one if necessary.

So, who killed Jesus? The Jerusalem leaders saw Jesus, his followers, and interested crowds as a threat. He openly proclaimed the “kingdom” or “empire” of God and was called “king of the Jews” (Mark 15:2; Luke 23:2). This title is treasonous since only Rome could appoint or sanction kings in provinces; they had not sanctioned Jesus. So to protect their position as rulers against a potential threat, they ask Pilate to crucify Jesus.

It was, again, a bar fight. They broke the butterfly on the wheel in hopes of maintaining power, money and sinecure. Their political positions and political stations.

Finding yourself, in between and in disagreement with the Powers That Be, can result in a conspiracy, of interested power brokers, who, in the end, will NOT take Barabbus.

The shores of history, are strewn with the wrecks of empires. Many, if not most of those wrecks, were first weakened from within, by lies and criminal politicians who sought power for power's sake and constantly created fake hoaxes, conspiracies and narratives designed to keep them in power, at great cost to the nations they pretended so serve.

Cleaver, Schiff, Pelosi, the media, bureaucrats in Washington D.C., they are all liars.

They do NOT pray for the president, they pray for more power.

9:04 agreed, Trump is not going anywhere until he naturally passes away. Then he is going to Hell.

Byron was in the Raytown Coffee Shop this morning.

10:46 (Wow you're a prolific little poster here today, aren't you): So you're offended that Nancy Pelosi believes women should be able to control their bodies? What a concept. And drive-through abortions? Aren't you getting a tad bit untethered from the fact-based universe?

Trump is the closest thing to an honest president we had since Kennedy.

Sure, because Christians want the party of abortion on demand in power.

How is your other brain cell doing?

Durham has said he is running a criminal investigation, and is investigating the illegal conduct of government officials who investigated Trump.

The more you know!

Up until the very day of birth, with no restrictions. At all.

She sure is some Catholic when it's convenient

When you prayed, God said Yes, No, or Wait until 2016. Now when Dimocrats pray for the demise of our President, God says No F'ing Way Retarded.

There is no god. Prayer is just squinting your eyes, & talking to yourself.

I've never understood how people who are "Pro-Life" can be Pro-Gun & Pro-Death Penalty. If a Catholic owns a hand gun is he allowed to take Communion? If he supports Capital Punishment?


10:53 has a secret he's dying to share, but apparently, nobody cares about his conspiracy theory. I am NOT in a coffee shop in Raytown.


Bryon knows how to pray as he states "Prayer is just squinting your eyes, & talking to yourself."


Bull Crap Cleaver. You have hated this president from the start now you are acting like Mr goody two shoes and YOU ARE NOT A CHRISTIAN so stop trying to act the part. You are for abortion, money laundering, globalism, and socialism. Stupid Son of a bitch!

Jesus was killed over a bar fight, folks.

The Gospel According to Chuck Lowe.

Did the cleave evar apologize for trying to cause a race war with his race baiting over the Paseo? Didn’t think so. He is as racist as he accuses all white people of. I wonder if his boy mlk is praying over him now for all his sins he’s committed in the name of god and the money he’s stolen. By the way, do you people know that the cleave who claims to be the poorest congressman has over 7 million dollars in investments?

Chuck said: "Jesus had essentially started a bar fight in the Temple, knocking the shit out of people..."

Up-Chuck makes me sick. Add one more topic to the list that he knows nothing about.

We're all still waiting for Trump to pay back his defaulted casino loans too.

4:30 you really are stupid aren’t you? Poor baby, he was speaking metaphorically, god you’re an idiot.

4:39 4:41 awwww chimpy, do some monkey shines for us or no bananas for you! Hahahahaha!

Chimpy, Chimpy. It's good to see you try, but you never do this well. Stick to bananas lol

^^^^Did you work on that retort all night?

My favorite prayer, told to me by a revered boss, is: "Thank you, Jesus, for not making me believe in you so much I go nuts."