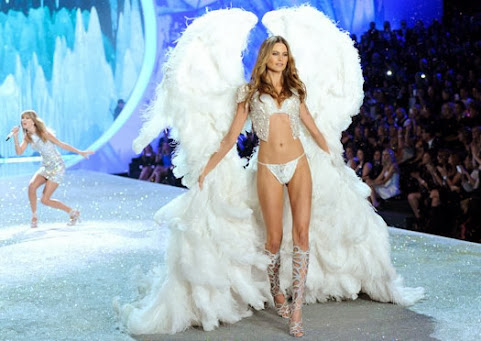 Here's our tribute to fashionista hotness, pop culture and community news this morning . . .

KANSAS CITY, MO (KCTV) -- Firefighters were working to put out a three-alarm fire in KC on Saturday morning. It happened before 6:40 a.m. at 1510 Prospect Ave., just south of Truman Road. It was an electrical fire that started where service comes to the business.

BELTON, Mo. - If you were out and about on Saturday night, December 14, you might have seen a tower of light spring up over the metro. This atmospheric phenomenon is actually called a sun pillar, according to the National Weather Service. Sun pillars form when the sun is near the horizon - in this case, at sunset.


Alessandra Ambrosio Admits She'll Miss The Victoria's Secret Fashion Show: 'We Had Such a Good Time'

One of Victoria's Secret's most recognizable faces is opening up about the cancellation of the brand's iconic fashion show. For Alessandra Ambrosio, a model with the lingerie giant for 14 years, the end of the show meant she lost a festive holiday tradition and a way to enjoy the season with her fellow Victoria's Secret Angels.

A Trump supporter took center stage at an Iowa campaign rally for 2020 presidential candidate Sen. Bernie Sanders, I-Vt., on Saturday, where he stood up and delivered a message to President Trump. Sanders sensed trouble from the beginning when he saw the young man approach the microphone and said, "Oh, he's looking at his phone.


What could North Korea's 'Christmas gift' to the US be?

We're back in familiar territory. North Korea is again issuing cryptic threats that officials around the world are scrambling to decipher.

CLOSE General Motors added a third shift at its Wentzville (Mo.) Assembly plant last September to build trucks and vans. (Photo: Melissa Vaeth for General Motors) General Motors is getting a tax break and the UAW is retaining 4,000 jobs.

TOPEKA, Kan. (AP) - The Kansas Supreme Court will have a new member and a new chief justice next week. Democratic Gov. Laura Kelly plans to have a Monday morning news conference to name a replacement for former Justice Lee Johnson, who retired in September.

Sarah Bernhardt was known for her eccentricities. She slept in a coffin, she kept a pet lion and attracted lovers everywhere she went. Bernhardt made five visits to Kansas City between 1887 and 1918, during nine American tours.

Snow, ice and rain will slow down travel from parts of the Plains and Midwest into the Northeast as a storm system tracks through those regions early this week. This system has been named Winter Storm Finley by The Weather Channel. A low-pressure system will move from the South toward the northeastern U.S.

If a tree falls in the woods but no one hears it, did it make a sound? If there is a meeting with no selfies, did it really happen?

^^^ But there were selfies. Weird.

"YOU and Mayor Q"

Hill buys the dogs and his buddy Vick will train them.

We are going to get to see Smiling Selfies Luca's amazing super duper upgraded and spectacular KcMo snow plowing services in action today!

If Lucas ever has ANY kind of meeting without promising everyone in the room something, smiling and taking selfies, and committing millions of tax dollars the city doesn't have, count it as a big success!
All hat and no cattle.
And not even much of a hat!