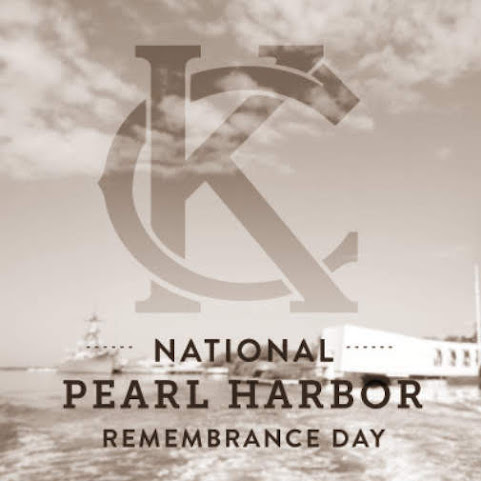 This day that will live in infamy is now mostly a footnote for history buffs given the far more captivating and divisive partisan discourse.

Nevertheless, it's still important for perspective on an attack that continues to define the world today.

Credit to KMBC for the first local link on the topic, we share a few more favorites for our early morning visitors . . . Here's a link to their work & other resources:


This Day in History: Pearl Harbor is bombed by Japan

On this day in 1941, more than 2,400 Americans were killed in a surprise military attack on the United States' naval base at Pearl Harbor in Hawaii.The attack was carried out by the Japanese Navy Air Service and struck a critical blow against the U.S. Pacific Fleet.President Franklin D.


How The U.S.S. Missouri - One Of The World's Greatest Battleships - Connected Harry Truman To Cher

The massive guns on board the U.S.S. Missouri are a sight-to-see, but it wasn't the ship's weaponry garnering all the attention on a late summer night in 1989. The U.S.S.

"December 7, 1941 - a date which will live in infamy," President Franklin D. Roosevelt famously proclaimed. On Saturday, Americans will mark the 78th anniversary of the Japanese attack on Pearl Harbor in Hawaii. The surprise raid on the major U.S.


How America Assassinated The Japanese Admiral Responsible For Pearl Harbor

Key Point: This revenge plot required a carefully sprung trap. This time, the target wasn't a terrorist. It was the Japanese admiral who planned the Pearl Harbor operation. But the motive was the same: payback for a sneak attack on the United States. In early 1943, Adm.

Saturday marks the 78th anniversary of the Pearl Harbor attack, and just one of the three remaining survivors of the USS Arizona will attend the annual ceremony in Hawaii.


Pearl Harbor commemoration to go on after fresh tragedy

HONOLULU (AP) - Officials will beef up security as usual for the ceremony to remember those lost in the attack on Pearl Harbor 78 years ago, with service members and dignitaries confronting a fresh tragedy after a U.S. sailor killed two civilians, wounded another and then turned the gun on himself at the storied military base.

MONTGOMERY, Ala. (WSFA) - "It was a Sunday afternoon. In Connecticut, a heavy snow beautiful sunshiny day," said Helen Lattal. Helen remembers the attack on Pearl Harbor. She was 21 years old, living in Connecticut, working for the draft board. She helped men register for the draft and took notes at hearings.

MISSOURI, (Missourinet).- December 7, 1941 is a day that President Franklin D. Roosevelt proclaimed as one which will live in infamy. It was the day that Japanese planes raced over the sky on the U.S. naval base of Pearl Harbor in Hawaii and fired bullets, bombs, and torpedoes.

Some Gen X and most Millennials won't care about today. Christmas/shopping season on their minds.

The greatest generation was created that day, god bless these brave soldiers and all ww2 soldiers, bravest and toughest mofo’s evar!

I echo the sentiments of 6:29. Watch The History Channel’s “America, The Story of Us,” especially the episodes focused on before, during and after WWII. If you don’t get a lump in your throat or tears in your eyes you may not have a soul. The entire country united for a common cause was an impressive thing to witness, and it’s easy to see why they were called the greatest generation.

These pussies nowadays would have just handed it all over to Japan on a plate and we would all now be speaking Japanese.

Our guys from WW2 must be rolling in their graves seeing what’s happening to our country. Leftist criminal sleepers in our government,kids brainwashed in public schools by criminal leftist traitors,communist infiltration in the media. Hell the commies want to turn little boys into girls further weakening our country. Then the commies missing spoke in the wheel a negro American hating commie in the White House to secretly flood our country with muslim enemies while trying to destroy our defenses and emboldened muslim killers abroad to attack us. Our guys that gave their lives to keep us free would be so pissed off they’d probably march on Washington and drag pelosi and her crew of thieving criminals out by their feet and throw them in prison