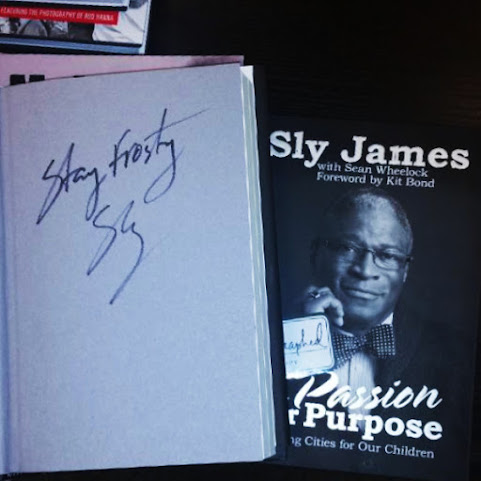 This book wasn't a Christmas gift, just took a quick glimpse at a leftover copy in a store that was selling far more coffee than than reading material.

In a brief glimpse at the smallish tome it was easy to tell that former Kansas City Mayor Sly James is attempting to rewrite his history and spin his reputation as a street lawyer into something slightly more respectable . . . That's too bad, because he was one of the greatest street lawyers in Kansas City history.

The former mayor dedicates far too much time to conversations with newspaper columnist Dave Helling who didn't really have much of an impact on his tenure. Our TKC blog community didn't merit a mention which is unfortunate because we basically led his opposition and broke news about every one of his notable defeats.

Still, the political memory of the public is fleeting and already most locals have forgotten a leader who was, at one time, an exceptionally popular Kansas City celebrity who ultimately walked away from political life with very little lasting influence and a legacy as a leader who expended every ounce of his credibility for the benefit of developers.

Actually, it was a good book and he does mention TKC indirectly.

Mostly, deservedly, as a scumbag.

well 11:00 as my Daddy always use to tell me it takes a scumbag to know who another scumbag is.

Dave Helling is whiter than Slys wife. Not kinding, does he have a decease ?

Oh, Chimpsy, we know you can't read. You like this book only for the pictures, silly monkey. Eeww, you've gotten pages stuck together like you did with that Magic Bowtie book. Yuk!

Maybe a good street lawyer but a horrible Mayor - and corrupt and hates Black people. Mayor with severe mental illness and self esteem issue.

Sly's music has stopped and his fade into oblivion was even faster than most of the past KCMO electeds.
The offices at 12th and Oak have been occupied by a whole new clueless group of celebrity wannabees, but the upside-down priorities and insistence of ignoring the public continue apace.
But, like the Cheshire cat in Alice and Wonderland, all that's left of Sly is his "frosty" smile.
Oh. And all the debt.
Lots and lots of debt.


Tell me please does Sly still drive around in that black SUV with the cardboard sign in the window that says official vehicle written in magic marker? I certainly hope no one from out of town saw that, it was really embarrassing.
Oh and Sly, stop siting on the furniture in Costco that's not your living room.

Sly was, and is, a regional embarrassment. A race-hustling puppet of developers who did absolutely nothing about real problems facing the city and looked absolutely silly and ignorant while doing it.

Not one word about the failed Open Spaces ego trip concocted by Slie!! Some artists and vendors still haven’t been paid!

You obviously didn't read it. You're in there.

You are referred to as a "local idiot."

His reputation as a street lawyer is overblown. He specialized in backroom deals, not legal brilliance.