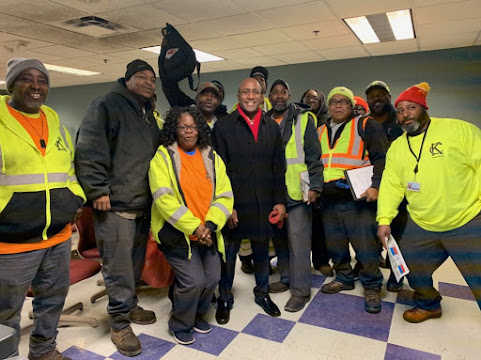 This is a tried and true stunt for every municipal politico in the nation.

However, Mayor Sly didn't have to do this kind of thing until his last year in office when public outcry about the condition of local roads had reached EPIC proportions.

Mayor Lucas is taking the ride on his first winter in office . . .

And so we ask:

IS THIS RIDE A SNOW JOB OR A GLIMPSE AT MAYOR QUINTON LUCAS MAKING STREET CLEANING A KANSAS CITY PRIORITY?!?!

Like it or not, locals wouldn't mind a visit from the mayor and his plow on their neighborhood streets; where snow removal has always been lackluster.

Interesting, anyone else notice the lack of any white people in the picture. No Mexicans or Asian people either, so is this a racists picture? Making a call to EEOC now.

I wunder why the roads are a mess?

Sad that Lucas is the whitest face in the picture.

That isnt a plow team,more like a family reunion

I hope they drove through Johnson County so they can see the proper way to remove snow on City arterials.

My concern is that there is no accountability for the middle managers hired by the City. If you have zero accountability in your job performance, how can you be expected to perform?
This is quite possibly the basic issue with the lack of quality found in many aspects of City Services.

Well well, isn’t he turning into a mayor,

Did the incompetent director of public works go too?

PR stunt. Wait until all the plows reopen all the potholes that were supposedly filled.

Proud of my mayor. Most of you idiots just sat around on your ass today and didn't help anybody.

I live on a snow route. I think these guys do a great job. They actually get shit done in this town.

Nice try asshole,I plowed 7 driveways in my neighborhood and added a second pass on my street since the city only seems to feel that one is adequate.

10:47 and the Mayor did the exact thing, he sat on his ass. You really think he did anything and if you do you're one delusional fool. !0:47 is a prime example of the idiots who vote people like Lucas into office.

Q was probably excited to ride in a big truck with some burly men.