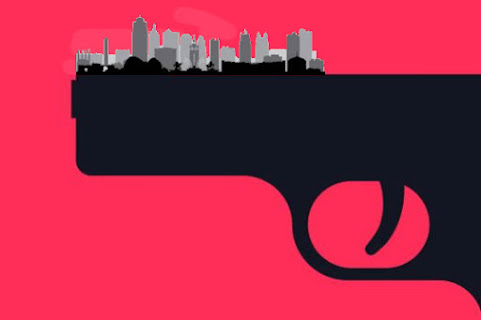 There has been a bit of back and forth about the homicide count and local news encountered some trouble keeping the KCMO murder total straight on an exceptionally violent Sunday night.

Credit to KCPD for keeping the public informed and sharing their latest info:


Remember that justifiable homicides don't count on this list. That includes officer-involved shootings, self-defense and all manner of deadly confrontations that DO NOT result in murder charges.

Moreover, some very smart KCPD public information officers advise us that these numbers aren't set in stone. They change from day to day as cases are reclassified. Still, this is the best resource we've got for keeping up to date as metro murder counts don't really tell us much even if local media like use them to earn more shocking headlines . . . Here's a better, closer look: 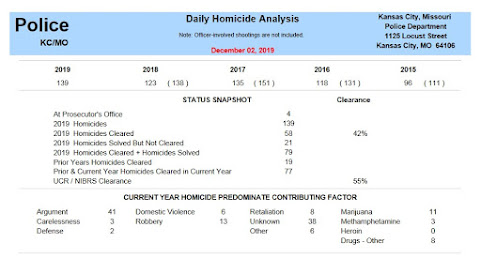 THE KANSAS CITY, MO MURDER COUNT IS OUTPACING ONE OF THE MOST VIOLENT YEARS ON RECORD AND THREATENS TO BREAK THE 1993 RECORD!!!

In 2017 KCMO nearly surpassed the 1993 record with 151 killings documented -- There were 153 murders fueled by drugs and gangs in '93. At the start of December, KC stands on a pace more deadly than BOTH of those years.

On the bright side, generally, KC's gang problems isn't quite as bad given that movies suck nowadays and everybody thinks they're a super hero . . . But the drug threat from Mexican cartels is far more pronounced as Feds now start to warn about local drug war fighting betwixt narco-terrorist factions and their local supporters.

But here's where it gets tricky . . . There's a "domestic" component to these killings as well. Violence against women is often a major factor in boosting these numbers higher. 21 KCMO women have been killed in 2019 and nearly all of the females are innocent victims of attackers; unrelated to local gang or drug activity.

DECEMBER IS TYPICALLY ONE OF THE MOST VIOLENT MONTHS IN KANSAS CITY!!!

And so, we remind our blog community that this is the season of deadly beatings and bloody confrontations as Kansas City killing defies holiday wishes for peace.

Townhall: The Futility of Gun Regulations: From Ghost Guns to Background Checks

Breaking the murder count this year would be good for Quinton Lucas. He can blame it on Sly and then hope it falls naturally, claiming that it was his work that accomplished the drop.

I think the new mayor is doing a good job about trying to do something to address the problem. Sly just blamed somebody else and moved on to giving developers more money.

That's total b.s. that people just write off this problem when women are getting killed, trans community is getting killed and the violence endangers everyone. It's not just an east side problem, it's an everybody problem.

^^^ So are you signing up for the police force soon?

With these stats I think it’s better described as Coontown than Cowtown.

Good Lord how many more years of this can Kansas City take? When is KCPD going to show some initiative?

A new record will be a tremendous Christmas gift for the city and powers to be.

of course NOW it's starting to show up on TKC --too funny!

Let us see the police records of the victims.

Nothing's worked to stop this so fuck it, let the animals kill each other off.

The cleave was in office when the record was set. records nearly broken and outrageously high murders for the last eight years with sLIE in charge, you ask what’s that mean? Black mayors equal high murder counts is what that means.

B-b-but the (((ADL))) says that White Supremacists and Hate Speech are our biggest problems.

Interesting and fun fact, the entire state of Kansas has less murders than killa shitty does every year for the last 19 years.

Don't worry folks! In 2010,voters approved the renewal of the 1/8 Public Safety Sales tax. Those funds were supposed to give the police the needed modernized buildings and tools to fight crime, clear the rape kit backlogs, hire new police officers and the like. Instead, the fat, diseased Black Rev John Modest Miles shook down Jermaine Reed, Melba Curls and KCPD to relocate East Patrol to the far western boundary so he could siphon fund from that, get paid on vacant lots the City gifted him and his family members (while actual affected residents fought in court to be treated fairly). Yeah, Kansas City's chickens are roosting. Dead bodies everywhere and the rats at the public trough are still biting their way through electrical wire to get a seat at the unlimited taxpayer funding. The City taxes and gives your money to grifters like Miles. But... if you drive through Johnson County, things are safer there than they have ever been. Meanwhile, don't leave your Kansas City residence without full body armor and assualt rifle.

It is pretty strange that KCMO voters approve all of these BS taxes that are supposed to do so much in reducing crime, yet it gets worse all the time. I would be pissed as a taxpayer there at the way money is wasted with absolutely nothing to show for it.