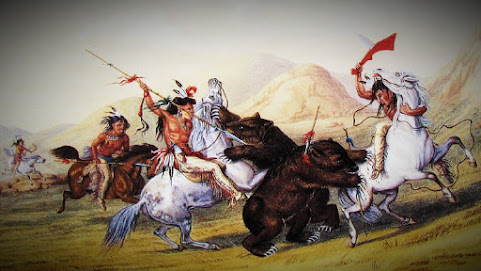 This was a grind of a game wherein the Kansas City outmatched their competition but still played a slow, plodding and calculated game. MSM seems to be jumping back aboard the bandwagon and season of playoff hype has arrived at last.

A note about the lead photo for just a bit of edification . . . "George Catlin (July 26, 1796 – December 23, 1872) was an American painter, author, and traveler, who specialized in portraits of Native Americans in the Old West. Traveling to the American West five times during the 1830s, Catlin was the first white man to depict Plains Indians in their native territory." His work represent, what is likely, the most accurate depiction of the plains before U.S. westward expansion. But I digress . . .

Here are the highlights of the game we found most interesting and relevant for the team's immediate future . . .

The Kansas City Chiefs thrashed the Chicago Bears on the national stage, winning 26-3 on Sunday Night Football. Patrick Mahomes was 23 of 33 for 251 passing yards and three total touchdowns in the game. The Chiefs scored on each of the three possessions they had in the first half.

CHICAGO - Patrick Mahomes threw for two touchdowns and ran for another score, and the Kansas City Chiefs beat the Chicago Bears 26-3 Sunday night to stay in contention for a first-round playoff bye. Kansas City (11-4) earned its fifth straight win and remained a game behind New England for the AFC's second seed.

When a player is the reigning MVP, he is expected to put up highlight plays, and Kansas City Chiefs quarterback Patrick Mahomes did exactly that on Sunday Night Football in a nice 26-3 win over the Chicago Bears that was never really close due to the Chiefs strong defensive effort.


What to care/not care about from Week 16: Less is more for Patrick Mahomes, surging Kansas City Chiefs

So much happens on any given Sunday in the NFL. It's hard to keep track of it all. More importantly, it's quite a lot to decide what we should value as signal and what we should just ignore as noise.

It marked the fifth-straight game that the Chiefs held the opposition under 20 points and the second-straight time that Kansas City yielded only three points of offense. Offensively, Kelce hauled in eight catches for 74 yards in the contest while becoming the fastest tight end to 500 career receptions in NFL history, doing so in just 95 career games.

That's going to do it for our live coverage. The Chiefs dominated from the onset against an inferior opponent. And now, they still have a chance to catch the Pats and earn a first-round bye. As for the Bears, well, it was yet another sobering reminder that they don't have an NFL-caliber QB.

At this point, it'll be very difficult for the Kansas City Chiefs to get that two seed, as they'll have to rely on the Dolphins going into Foxborough next weekend and beating the Patriots.

They actually looked better here than they have in the past six games.

We have a chance. Anything can happen in the playoffs.

Bullwinkle: "Hey Rocky, watch me pull a chiefs Superbowl out of my behind!"


Rocky: 'But you say that EVERY year!'

Shit, are they still playing Football?
Don't they know that all Children's Games should have moved indoors by now?

^^^are you still shitting yourself pappy? Don't you know nobody wants to be around a stinking pile of shit like you?

^^You do cockscucker. You go out of your way to care by posting on here.

Such foul language from a fanboy.