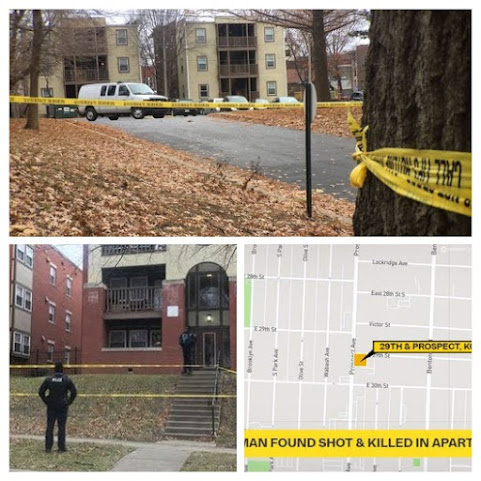 The spate of local gunfire continues as Kansas City advances along a RECORD-BREAKING HOMICIDE PACE for this year . . . Check the rundown and latest urban core low-income housing murder:

KSHB: One dead, one in custody in shooting on Prospect

KCTV5: Police are investigating a shooting that left one person dead in an apartment.

Fox4: Around 8:15 Sunday morning, they were called out to 29th & Prospect on a shooting call. A man was found shot and killed at an apartment complex at that location.

The Mayor's count is higher:

"People ask the hardest part of the job. This is it. We've got a lot going for us. I'm proud to be from here. I'm proud of where we're headed in some ways, but 141 lives cut short & all the lives impacted this year... We can never accept it. More work ahead b/c we will change it.

"With another just reported moments ago, Kansas City will have experienced three homicides in the last 24 hours. Each victim's life was important and each has a community of family and friends. My heart goes out to all those impacted by the senseless violence in our community."

15 more homicides this month and we have a new murder record.

Hate to start a countdown but there it is. Basically, if the pace remains normal and there's a double shooting, than this is the most violent year in Kc's history.

Don't worry, I'm sure that all the fair housing is going to stop this kind of lawlessness.

^^^^ And that's not counting a lot of homicides that didn't qualify because of reclassification.

KC is a segregated violent southern culture city. Brookside loves that boundary, reminding the little people so close but just east of Troost. The Star likes to under report the violence because it looks bad when they go to conferences. KC is a bona fide dangerous place and white people do not give a flying fuck.

Did you all notice q said 141 murders?

12:05 apparently your own people don’t give a fuck either! Hahaha!

In order t further the Progressive "Narrative" and assign the blame for crime to "caused" vis a vis "committed", stats on crime must be manipulated in order to, once again, remain politically relevant and in office. Inner City Crime, which has young black men stacked like firewood exsanguinating into city gutters full of trash, SHOULD motivate the very black inhabitants of those same neighborhoods, to insist on a larger police presence and strict enforcement of laws, so that their children can play in parks, go to nice schools and not get shot the fuck dead on the porch.

But the fallacious Progressive "Narrative" that promotes the idea that Law Enforcement is the enemy - and supports litigation against those Law Enforcement Officers, defeats the Rule Of Law, that makes those unrealized dreams of inner city blacks an ongoing nightmare.

Look, no one is so naive, as to think, that there are not transgressions against EVERY community on an ongoing basis, by Law Enforcement. But the "throw the black baby out with the bathwater" approach that kills so many, should be modified dramatically and the relationship between Law Abiding Blacks and LEOs looked at through a more realistic prism, than the one, presented over the last 50 years by scum bags like Al Sharpton and Rep Cleaver.

Obviously, THIS IS NOT WORKING.

This has by far been the most violent year based on violent crime and all shooting just not murders.

Killa shitty blacks are making us the bestus city in the world!!!

For crime, murder and mayhem! Hahahahaha!

Has a better ring to it

Go fuck yourself 12:23 this is the safest city in America under Mayor Lucas's leadership!

At least the hoodrats in New Orleans are making an effort. Lazy ass KC porch apes afraid to get out in the cold.

And the Star just had a big-time article about all the progress that $150 million of "public/private investments" was making along Prospect.
Willful ignorance.
Sad.

Segregation does not cause violence.

So this means that Professor Kraske was right, and that a legacy of institutional racism as expressed in things like Confederate statues perpetuates this pattern of violence.

12:58 we did take the night off and the murderous blacks keep killing! Lol!

^^^ You wanna wake up in an alley with the cats lookin at ya? lol

They keep it in hood, so who cares ?

Fire Smith!!!! Forté had people screaming to fire him long before he was gone. KCPD needs a leader, not an asshole. He’s is over his head and refuses to talk to the community.

Really, and just how do you figure that? You might be surprised to learn there is no crime crystal ball to know just where and when the thugs will strike next. So until that happens why don't you slink back down to mommy's basement to continue whatever dragon quest you are currently on. Just what in the hell do you expect KCPD to do except clean up one tragic mess after the other? They're not in the business of predicting crime, you moron. And, considering they get next to no cooperation from the public, they do a damn good job solving what they are tasked with. You, however, have got to be the biggest disappointment since the new Coke failed.

May I point to yet another murder 2 blocks South of the new East Patrol. The people of this City were told that these murders would stop once they threw out all the property owners (merely because they were Black) and that that combined with the police now occupying the entire neighborhood would rid the area of violence. Where is John Miles, Alvin Brooks and Eric Wesson; and honorable mention from Emmanuel Cleaver? I can only hope the deceased is John Miles. And let his body lay bloody and rotting in the street because until that time, he and others like him apparently cant smell their own stink. Nothing like rotten flesh to wake the brain dead and damaged.

3:06 Said it all. No way cops can foresee where and when. No witnesses.

What the hell would you do. DO NOT BLAME THE COPS FOR DEM RUN SHITTIES.

There may not be a crime crystal ball but that it how the Poliice sell the renewal of the Public Safety Sales Tax... if we can just renew this funding, we will be able to fight and/or address crime adequately. Glad to see we are both in agreement... no matter how much money is thrown at the police department, they cant seem to build bridges and prevent or adequately address crime. We agree. The Public Safety Sales Tax should not be renewed when it comes up again.

12:05, you need to travel and/or research more. Race relations are actually better in parts of the south than in many northern areas.

The KCMO con which has been sold to the city by the City Council and its leadership is that if you invest in the east crime areas then your return will be less crime.
This is the basis of the Clever/James/Reed legislation relating to the following:
East Side Place station
Linwood Grocery
18th and Vine
Jass Museum
etc etc etc
Kansas City needs to reward good behavior with investment.
BTW, did you know that J. Reed has an MBA from UMKC?

Gotta have a jail-KC doesn’t. Shooters back on the street in 48 hours. Agree with my succinct friend above...moron.

If only we would have spent all that money in the hood and everything would be perfect!..... wait, what? We’ve spent over a billion dollars in da hood and it’s only gotten worse! And the fat fake revs are taking the money for dey selves? So that’s where the cleave got his 7 million dollars from.

So that makes 142 by the mayors count then?

2:34 is a KCFD Employee JSEK, and if the public knew the internal workings and corruption of KCFD they (KCFD) could claim to have saved Jesus and still wouldnt be hero's. When I see a fire truck in KCMO I see a loser wagon rolling down the street with lights and sirens.

Fires got nothing on the corrupt kcpd, pd is the biggest crooked con game going, getting paid to do nothing. They steal money from everyone and do nothing but collect huge paychecks. They refuse to get under city control because they’re funding will get cut, forced to do their jobs and the gravy train will be off the track, damn right the city needs control over pd so we can have a police dept that has to do their jobs, otherwise business as usual, nothing.

Nothing can stop a random nut from killing another random nut.