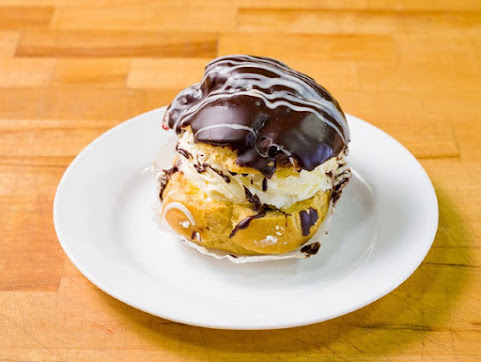 Worthwhile behind the scenes insight into our current taxing harsh times . . . Here's Courthouse Insider consideration even if we believe THE BUCK STOPS WITH THE EXEC AND HIS BAD DECISIONS.

Still, there's enough blame to go around and there's some great deets in this op/ed sent our way . . .

The "Revenge of the Cream-Puff"

In the coverage of the ongoing and historic disaster that is the 2019 Jackson County assessment cycle, a glaring CONFLICT OF INTEREST has been almost completely ignored by the MSM, and specifically the Star (I know, shocking). An out-of-town "expert" was paid over $600,000 in tax dollars this year (please note, this was money paid to ONLY ONE MAN for his services for ONLY ONE YEAR) for his purported "expertise" to manage the assessments and numbers county-wide (Clearly, this was money well-spent. *cough*).

However, and most importantly, OVER $250,000 of that figure was paid by other taxing jurisdictions (not the county) like the local school districts and the library board. This type of thing has NEVER happened before. (Q) So, why on earth would school districts want to pay big money for an otherwise basic county function? (A) Because the school districts and the library stand to reap an enormous windfall of EXTRA MONEY WHEN THE ASSESSMENTS GO UP! In fact, most of their budget comes from the property tax assessments. So having control over the person in charge of the "process" is clever but very sleazy business.

So let's quickly break this down: The "expert" hired by the county to make sure the assessment numbers were "fair and correct" was paid over $250,000 directly by those institutions that would stand to benefit the most from those very same assessments skyrocketing. Does anyone besides me smell the very clear rat and conflict in the room here?  The ultimate victim: The poor saps (read: taxpayers) and people of this county that were sold out for peanuts by those in charge.

Bonus fact: As an added insult in this disgusting tangled mess (as if it could get any worse...but it does), guess whose idea it was to throw all of this money at the out-of-town expert? None other than good-old CREAM-PUFF, recently fresh out of Leavenworth Prison for corruption. He "sold" (read: orchestrated) this whole idea to the White administration right before he abruptly "left" the county TO TEND TO HIS FEDERAL INDICTMENT.
##############

Don't think it'll matter much to people kicked out of their homes because they couldn't pay the 300% increase.

The fact that Jackson County has been plunged into this mess by the schools is one of the biggest slaps in the face KC has seen in years.

They're provisionally accredited, they lie about their data and now they want enough money to throw a significant portion of the county into bankruptcy? It's really disgusting how the KCPS has ruined Kansas City and continues to provide a reason to avoid permanent residence in KC Mo.


No one in the county got a 300% increase, and if anyone gets kicked out of their homes it's because of the renters who just passed an ordinance against the landlords. Suck it up dumb asses rent is going up. You screamed for it your got it.

^^^^ I hear ya about the rent. But this jackson county screwed home owners too. 300% property taxes are the lucky ones, some of us got hit with 800% or more.

More info here shows the process was totally screwed up:

To the African-American Community this affects the most, please remember this whole Fiasco was done to you by African-American mayor an African American County Executive an African American County Executive assistant. The previous African American mayor Sylvester James TOLD your people he needed the Pre-K tax. You did not give it to him so now they are taking it just goes to prove if they want it they will take it from you. Much the way your ancestors were taken from Africa by other Africans. When will you understand just because the leader speaking to you is African-American he must be believed over any kind of whiteness. Also remember this money will go into the general fund of the city and county much like to go fuck me bonds I'm sorry the go bonds. The African American Community needs to get off the racist bandwagon and start seeing how their own people much like in Africa are robbing them of their dreams and Future. Please take a look at your community you had African American mayor, congressman, school district superintendent, a white liberal female senator, police chief, oh and let's not forget you even at the same time had an African American president and look at your community is it really better off then it was 30 years ago.. #rejectcolor..

^^TL/DR. Less is more. Nobody has any kind of time for crap like this. Do better!

Except for your attention span being so short which indicates you are a young uninformed voter. What part of the above statement is incorrect or wrong? If you're going to criticize something, criticize content not quantity. You need to do better

I'll criticize what I what, how I want, and when I want. Don't like that Tim? Then suck my dick. Go away now. You're boring and a little bitch! How's that for criticism?

Here's some for you; you're a Chimp! Lol

Timm ignore what 9:29 said, he has a limited vocabulary and he flunked out of 3 grade reading skills. He's just an asshole who hates on everyone who makes any common sense around here.

Right on ...thank you.. even to the hymn may peace be with everyone this holiday season give joy for what you have

somebody is mighty resentful and spiteful to give Tony this angry diatribe. still hates Sanders even after he's lost his law license and went to prison, dang ...

Radish, FYI-"Cream-puff" and mention of Leavenworth is a reference to "Cream-Puff" Calvin Williford, who still worked for Exec White until he left right before his indictment. I worked with him at the county for 10 years. Worst POS I ever met. Fat, lazy, and a thief.

Timm-please take to heart everything 9:42 said. Your posts were boring and idiotic. You don't really have anything to add, so please refrain from ever posting here again.

Hey Tony here's a solid news lead to investigate. A certain board of equalization member who is leading the charge on stirring up the natives has a history of soliciting Jackson County schools as a for-profit consultant focusing on increasing their tax revenue. Two questions: How can a board member not be guilty of at least conflict of interest by promising schools he can raise tax revenue while supposedly sitting on a board as a non biased judge? And what is his relationship with the highly paid paid contractor? Maybe ask (P) himself, lately he seems to be gobbling up all the press coverage he can.

I found it very mentally stimulating. Gave me something to think about. It's only boring and or idiotic to those who disagree with it. So now we know where you stand.

^^Just like you do every day with your Social Security and Medicaid pops.

I worked around Williford and he was and is a worthless waste of space. And I don't just mean his fat ass. Not mentioned is that I'm certain he arranged a kickback for himself in the entire affair..

600K is necessary to include all of the people that have to be greased. This makes sense that it was a cream puff project.

Just like you with your bananas in the zoo! Oh Chimpy, you make it so easy. Lol

I love that guy. He smokes hella weed. He was NOT GUILTY. A good man. Don't be a hater!