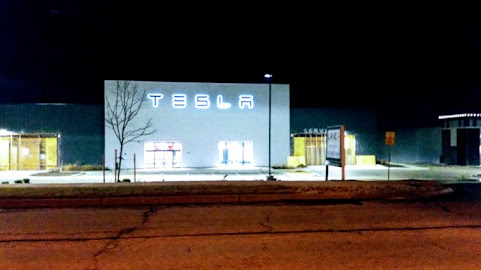 Just in case one of you d-bags wanted to buy an X-mas present for this blog. Not sure but I'm thinking I could probably charge it up at Starbucks.

Quick peek at 10123 State Line Road in the Southland and a new biz model for Kansas City at a better location than the Plaza . . .

While the State Line Shopping Center may appear to be an odd location, it is about two blocks north of one of the area's largest concentrations of dealerships. The strip between Interstate 435 and Indian Creek, between State Line and Wornall roads is bumper-to-bumper with makes such as BMW, Cadillac, Dodge, Nissan, Audi, Acura, Toyota and more.

Tesla, however, is different in that the company is selling directly to consumers, rather than through dealers — a point that traditional car dealers have fought in Missouri courts and the General Assembly.

charging a Tesla at starbucks. now THAT is comedy my friend.