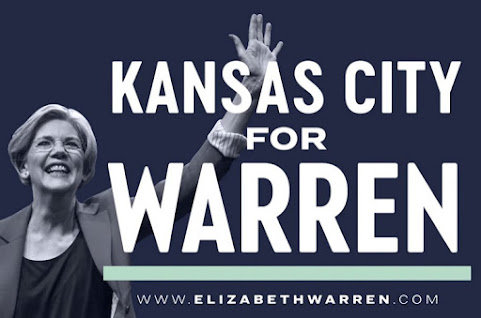 Local supporters of Sen. Elizabeth Warren, all 5 of them, plan an EPIC campaign office debut this Saturday just in time to be embarrassed in Iowa.

She's 4th in the polls because nobody wants a repeat of Hillary Clinton disgrace and Democratic Party disunity.

Paid staffers are recruiting sucker volunteers but keeping the office location secret because this crew is terrified of both their Democratic colleagues and local Trump supporters.

KCMO is a good place start if your fishing for suckers.

It's always a good idea to keep your campaign office secret. In fact,
keep your whole campaign secret. Then you won't be bothered by those pesky supporters and voters.

I know where it is. Anybody want me to say? Place your votes!

Why isn’t the leftist commie criminal in jail for affirmative action fraud for her Indian scam. I didn’t know there was a tribe of Indians that had blond hair and blue eyes. Just another democrat criminal

The Clintons Mafia ARE behind the impeachment of the President, And you may,Have Hillary or Mrs.Obama come out of the woodwork and Run. The Democrats right now don't have anyone to Defeat Trump. Remember ,YOU have One hundred million people who are gun owners Millions of minorities Are going to vote for Trump The Bible belt voters. And Tens of millions more that don't want socialism.

However much money Liz spends in Missouri or Kansas is a total waste.
Neither is an important primary state for the Dems and their presidential candidate will lose in the general election, whoever they are.
Just another chance for local "activists" to put on a show and make a few bucks.

1) Lied about Native American ancestry, which she used to get a teaching job at Harvard, while displacing actual minorities.

2) Lied about getting fired from a job as a young woman, because she was pregnant.

3) Lied about only sending her children to public schools.

4) Lied about her support for the working poor versus corporations, while she's worth $12 million and worked for big corporations.

Once is an accident, twice is a coincidence, three times is a pattern, and any more is a joke!!!

^^ 838.. And the Fact that is the only thing they really offer. Almost every time.

I assume the rent was free, the workers work for free and no one pays for anything. MAGA

As a senior citizen that can still get it up I would f__k her but I wouldn't vote for her.

8:07: Even assuming any of the accusations are true, she's piker compared to the liar-in-chief.

"Even assuming any of the accusations are true" WTF?

They've ALL been proven true!

You're in DENIAL! Your brain is a terrible thing to waste.