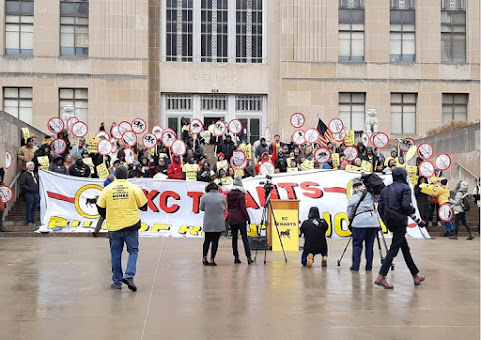 Last night an important fact of life emerged amid the discussion of tenant rights ...

MORE THAN 40% OF KCMO RESIDENTS RENT AND THAT NUMBER IS RISING!!! THE COWTOWN DREAM OF HOME OWNERSHIP IS DEAD!!!

And so renter protections aren't just a matter of 2020 social justice electioneering but a glimpse at future housing arguments.

Karl has covered this fight for our blog community and her shares these insights on the EPIC local debate last night . . .

Dan Fowler was UNDER FIRE LAST NIGHT . . . He came off worse than any other elected official. Unprepared to deal with this issue.

Property Owners Are Not Landlords. The Feudal Era Ended In 1804 The Year Kansas City was founded.

The problem I see with utility companies are the monopolies and the property owners want to offset cost and let renters carry the risk ... Let me explain: The last time I tried to contact A LOCAL UTILITY COMPANY, I got a call center in Birmingham Alabama who referred me to a pawn shop on Independence Ave. In the urban core, most people don't realize that utility companies run a shady racket against EVERYONE.

Eventually, compromises will be made by Mayor and Committee.

Fox4: "Many came out to argue passionately for new laws to protect the rights of renters in the city, but landlords insist an ordinance like this would backfire and force property owners to sell their rental units."

FREE housing is a human right!

Let the slumloards sell their JUNk - The reason they rent the property in the first place is because no one would buy their shitholes.

"The Feudal Era Ended In 1804 The Year Kansas City was founded."

Except Kansas City was founded in 1850. Weird.

MORE THAN 40% OF KCMO RESIDENTS RENT

What that really means is that more the 40% of those living in Kansas City are deadbeats with bad credit. Losers who want to work at Mickey D's 20 hours a week drive a new Escalade and live in a 2k a month rental.

A very small portion of renters choose to do so for life as being the ones who can afford payments but don't want to deal with the upkeep and so forth with owning a house. But these are the sort who live in fancy nice condos on the fringes of Kansas City not in the ghetto.

Except it wasn't. Lewis and Clark stopped here in 1804, and Choteau's landing was established in 1819. In 1838 it became the Town of Kansas and then was incorporated as Kansas City in 1850. Weird.

The utility monopoly exploitation of renters and owners applies to Spectrum cable which has raised rates beyond reason to take advantage of people who have no other source of cable.
Basic cable and basic internet were $88 in 2015 and have now increased to $186 per month.
Many fixed income seniors are struggling to meet expenses.
After much cajoling and pleading they will give small "promotional discounts."
They operate under KCMO franchise and increases should be monitored for reasonable and justified amounts.
They waste millions for advertising while diminishing quality of life for seniors and low-income people.

The water rates are to damn high.

^^ I noticed on my last water bill which isn't a Kansas City water bill that I was paying over $20 in water and sewer service charges. WTF do we pay a service charge for? Is it for the lady who answered the phone the other day when I was checking on another property who was speaking with a heavy accent so heavy I was having trouble understanding what she was even saying. If we have to pay a service charge then at least have someone who answers the phone who can speak simple understandable english and knows how the hell to do their job.

The illegal and destructive appropriation of private property and power over the legal owners of that property, by Communist/Socialist/Progressive/Fascist/Democrats will send rents higher, exacerbate shortages and like it always does, diminish the most vulnerable to the laws of unintended consequences.

Machiavelli said, that in the end, everyone actually gets the Government they deserve.

The blinkered, jejune folks who think that government control which in turn guarantees "Freebies" at the expense of some remote, evil, rich Capitalist, will be the first to suffer for their stupidity, arrogance and indolence.

As a property owner in KC I've almost started to come around and root for this godawful piece of shit to pass because these poorly thought out liberal programs will raise the rent a TON and further push the poor people out. Also, as a property owner, this will make my house worth even more. Any city that institutes "tenants rights" bullshit ends up having a much higher rent AND overall property value than cities without. My house is in a good area and if we keep these dumb policies up my house will be worth twice as much in 10 years. Hell, we get rent control going too and it might even triple.

Thanks for clearing up that "in the end, everyone actually gets the Government they deserve" quotation as coming from Machiavelli, Chuck @10:27!

I guess it's another "Deep State" lie that attributes it to either Thomas Jefferson or Alexis de Tocqueville as being adapted from the Book of Judges.

Keep up the good work of correcting our ignorance through your revelations of the "true Truths".

Have you given any thought to branching out into Detective or Western stories, or are you just going to continue to stick with Fantasy?

Rather than fight with the landlords, why don’t these people just go out to southern Joco and get a place there? There are some really nice apt complexes there.

Oh really then why do we do exactly just that to a prospective tenant.

Once this bill becomes law, I will stop renting out my property.

slies plan of getting rid of the poor and middle class is working!

Do these people work?

Remember when kc made certain rental properties have mandatory inspections and the dumb fucking libs were like "this won't raise rent at all because landlords could raise rent if they want anyway" or some like minded retarded argument. This was 2-3 years ago. Rent in KCMO has since gone up 10-20 percent because of these new regulations. Expect an even higher jump this time.

The liberal mind: always wrong, but rarely in doubt

What’s really funny, the probable Democratic candidate is a flaming homosexual who has no policy on climate change. He cares more about getting his fudge packed than he does about climate change.