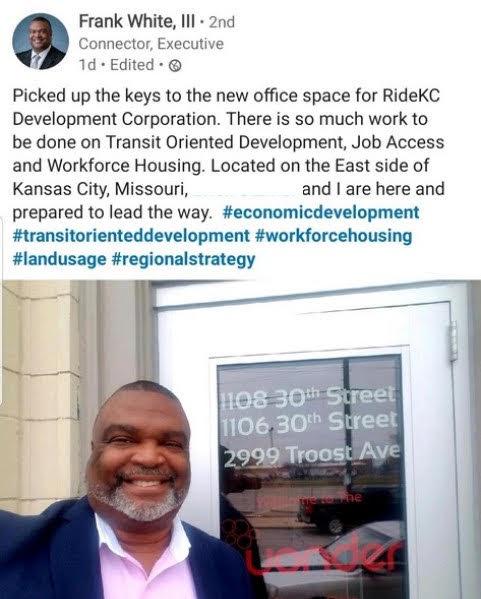 We broke this story not so long ago but here's the history for anybody who doesn't remember . . .

"The son of Jackson County Executive Frank White Jr. started work this week in a new management position at the Kansas City Area Transportation Authority that was never advertised to possible outside applicants . . ."

WE'RE HAPPY TO SEE FRANK WHITE'S SON STAY WINNING WHILST THE REST OF JACKSON COUNTY COPES WITH THE BIGGEST TAX INCREASE IN KANSAS CITY HISTORY COURTESY OF HIS DAD!!!

OF COURSE, we wouldn't dare suggest anything sketchy about transit job winning by this power player family . . . This Sunday, as so many locals cope with the reality of taxes forcing them from their homes . . . We can only remind voters that Frank White and Fam are working in high profile local government gigs despite a rising tide of criticism coming from people far more important than Internets denizens.

AS PROPERTY TAX BILLS COME DUE, THE COURTHOUSE BACKLOG IN DEALING WITH APPEALS HAS LEFT THOUSANDS CONFRONTING EPIC TAXES WITH NO RECOURSE DESPITE PROMISES  OF BOARD OF EQUALIZATION HELP!!!

There are a few stories of locals lucking out with low-ball deals with overworked County employees . . . Overall, the avalanche of appeals is nowhere close to finished, cases are being improperly dismissed, homeowner complaints have been discarded and the dissatisfaction with the process is growing.

Nothing new to see here!
Jackson County and KCMO government ae nothing more than taxpayer-funded slush funds for campaign contributors, friends, and family.
No need to have any qualifications or compete with other applicants.
And the results speak for themselves.
Third World city....here we come!
Momentum.

Franks son looks as stupid as he is.

That guy looks nothing like Frank White... did he just take a DNA test? Turns out he's 100% named after Frank White but unrelated?

There's clearly no one willing in Jackson County to stand up and call these folks out.

No oversight, no accountability and this goes on year after year with the Democrats remaining silent while their constituents get robbed by their elected officials.

Frank's just kind of in your face, "fuck you people". Everyone knows now why the Royals got rid of him.

8:54 Frankie boy has taken one too many baseballs to the head!

8:54 I agree, except he’s blatantly doing it now, not even trying to hide it, maybe Troy or bow tie the clown sLIE is giving him pointers on how to fuck people over. I do think frank is bi polar, for real, not kidding.

Just the voters getting more of what they voted for. When you vote for gays, loafers, losers and black folks this is what you get.

I can't wait to see Frank and his cronies hauled out in cuffs.

Well I guess you guys can just vote 'em all out then!!!

Ha ha ha. That'll be the day you guys get off your asses and do something other than complain.

If that be chimpy at 11:17, for once I agree with him. MLK was the first and only sensible vote I have seen in KC.

This guy looks about 60 years old. How old is baseball’s Frank White? He might look younger than his son. WTF.

.."new management position at the Kansas City Area Transportation Authority that was never advertised to possible outside applicants..."

Reminds of the time Congressman Carwash's daughter was given a job at the Port Authority of KC.

Another fat, incompetent darkey feeding at the trough that is KCMO. If I lived there, I would feel kicked in the nuts every day at the thought of my tax dollars paying to support the pack of turds that occupy city government positions.

What a graft-ridden shithole Kansas City is.