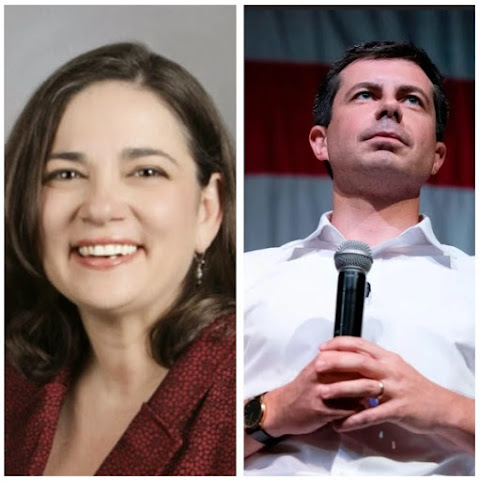 As always, we welcome comments and messages from our blog community. Tonight we highlight this analysis of recent Democratic Party upheaval and how it applies locally.

Here's the word from a friend of the blog who sent this quick response our way after we asked for just a bit of guidance . . .

"TKC, this year Kansas City passed on the first openly gay mayor in our history. Admittedly, former Councilwoman Jolie Justus had a "complicated" campaign but now Pete Buttigieg is becoming the Democratic Party front runner and I'm hoping our town will embrace him instead of holding on to the past. Remember that he earned a VERY warm welcome when he visited the Veterans Community Project. It's clear KC is ready for a candidate that stands out from the rest of the pack and has the potential to make history."

538: What Happens If Buttigieg Wins Iowa?

Slate: Which Democrat Will Most Savagely Attack Mayor Pete at Wednesday Night’s Debate?

GQ: The Audacity of Pete Buttigieg

BuzzFeed: People Want To Die After Watching Pete Buttigieg Supporters Doing Their Dance To "High Hopes" By Panic! At The Disco

Agree with Tik/Tok, he loses to Trump by double digits. May not even carry his home state. If that's the best the Dems can come up with, the might as well not even run.

We already have Greg Razer, an openly gay man in the Missouri State Senate from Kansas City. He's got a bright future and is a terrific guy.

Three friends -- two straight guys and a gay guy -- and their significant others were on a cruise.
A tidal wave came up and swamped the ship; they all drowned, and next thing you know, they're standing before St. Peter.
First came one of the straight guys and his wife.
St. Peter shook his head sadly. "I can't let you in. You loved money too much.
You loved it so much, you even married a woman named Penny."
Then came the second straight guy. "Sorry, can't let you in, either. You loved food too much.
You loved to eat so much, you even married a woman named Candy!"
The gay guy turned to his boyfriend and whispered nervously, "It doesn't look good, Dick."

I asked Byron if he remembered his first blow job.

I'll be here all week.

Bernie and Warren are too far left. Even Obama thinks so. Gay or not, it's nice to see some Democrats waking up and getting serious about the election.

No thanks. Think about the past 2/5, Kc obviously prefers our mayors closeted.

Even if Buttigieg is ahead, he will let the others get him from behind.

Anybody but the orange Cheeto. Sorry beaches.

Chuck is a liar.

^^^^^ I always hate to agree with Byron but he's got a point. Chuck's "joke" is old and pathetic. Sounds like more locker room talk from a trump voter who doesn't get outside very often.

I think gay jokes are hilarious, especially when they are cruel.

^^^^ That's why you're alone in the middle of the night. Join the club.

Im waiting for the one legged illegal alien heroin using homosexual black to get my vote.Must be post op.

Funny, I chuckled, Chuck. Thanks.

4:05 he also rides a bike and wants special lanes.

We didn't pass on Joile because she is gay, we passed on her because she didn't represent her constituents, a prime example being the development at Westport and Broadway.

As for Mayor Pete, most Americans won't give a shit about what he does or doesn't do in bed. Oh, possibly those like Chuck and the midnight posters who are essentially incel, will obsess over others' bedroom activities, but those who have moved into this century will be more concerned about how well Mayor Pete will do his job if elected.

I asked Bryon if he had "sucked all the dick he wanted"?

My eyes lit up and zipper went down.

As rainbow flags unfurl and flap freely throughout the world as a tribal emblem of people who take pride in the fact that they find the opposite sex unattractive, a countermovement is erupting like welts on the back of a freshly whipped slave. People who only a generation ago agreed that what two adults do in the privacy of their own bedroom is nobody’s business but their own have now had it up to HERE with that fact that while they were minding their own business, the Global Sodomitical Mafia moved the goalposts and dragged everyone into gay people’s sex dungeons and are forcing them to watch with their eyes held open Clockwork Orange-style.

Byron, Chuck is funny and you are the little twerp who ratted out your fellow students for passing notes when the teacher left the classroom.

I hope 6:46 is right, because Pete is a bright guy with a great resume. I also like that he seems more libertarian than Dem or GOP. Moderation is a good thing.

7:11 You will be glad to hear, that Pete Buttigieg might not have many supporters in the African-American community, but the Mayor of South Bend, Ind., is crushing it among rich white coastal élites.

According to a New York Times analysis of Democratic fundraising efforts, Buttigieg has more individual donors than any other candidate in the affluent white "boat shoe" strongholds of Nantucket, Martha's Vineyard, and Cape Cod.

Commonly known as "Boat Shoes" communities, we can all take solace in the fact that we have so very much in common with these folks.

Because Byron is a self loathing white boy, when Leona Helmsley, or, any rich Prog uses a whip to chase him into a hole to look for tax payer treasure, he knows he is just "little people" and deserves it.

I would tell her to go fuck herself and yeah, I am funny.

Fuck the "Cancel Culture" and fuck you Byron.

I have a funny uncle you might want to meet, Chuck.

There is nothing moderate in the slightest about any of the Democratic field.

Little is known about Buttigieg, just like Obama years ago.
His parents were academics, his father was born outside the U.S. (just like Obama).
His mother Anne is from Indiana. (Obama's mother Ann was from Kansas)
He's an only child. (Obama has no direct siblings)
His father is deceased, and his mother would likely be eliminated if he becomes President. (Obama's parents were deceased before he became President, and his sole surviving grandparent (Madelyn Dunham) died on Nov. 2, 2008 days before Obama won the election.
If elected President, Buttigieg would be 38-years-old. (Obama was 47-years-old when elected in 2008)
Buttigieg is openly homosexual and married to a man. (Obama remains a closeted homosexual, though everyone in D.C. political circles knows he's gay)
"Mayor Pete" has very little political experience to become President. He's a 2-term Mayor of South Bend, Indiana. The population of South Bend is approx. 100k people. To put that into perspective, Overland Park is nearly twice as big. Do you think the Mayor of OPKS is ready to become President? (Obama enjoyed the fastest rise to the Presidency of any modern President. His handlers quickly took him from the Illinois state legislature to the U.S. Senate and on to the Oval Office. If you review his election history, one can argue that he never won without some type of campaign irregularity, dirty trick, etc.)

BEWARE PETE BUTTIGIEG! He appears to be a fabricated political cut-out created by the Intelligence Services.

This fudgepacker isn't going to win anything.

And yet 9:37 ripped off the Lincoln-Kennedy comparison from the 1960s without attribution. Weird.